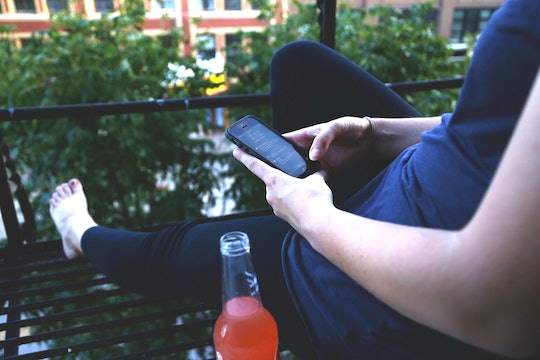 Did you happen to read the latest announcement from the CDC this morning? They want you to know that, if you're a “woman of childbearing age,” you should never drink alcohol, ever, unless you’re on a reliable method of birth control. Personally, I spent a large chunk of my morning reading that headline and saying “are you kidding me?” aloud to my laptop screen again and again and again. The CDC's argument is that if you did happen to become pregnant, you could accidentally harm your fetus with alcohol. Yes, it's a risk; it has been since human beings have had access to alcohol. However, if you look at this issue for more than two seconds, the CDC recommendation reveals how deeply sexist and anti-choice our culture still is. When we view women as potential pregnancy carriers rather than people with agency, needs, and wants, everybody loses. As a woman who’s experienced the joys of pregnancy, childbirth, and parenting, and as a woman who enjoys a martini, I think the CDC’s announcement isn't just wrong, it's grossly underserving of women.

The implication that what’s valuable about women is their potential ability to carry a pregnancy is extremely troubling.

At its very core, this advice echoes some of the most fervent anti-choice logic. It’s all about positioning potential people as more important (and worthy of protecting and caring about) than living, breathing people who are here right now, and who just happen to have the ability to carry a pregnancy. It positions women (what the CDC actually means is cisgender women, even though they say “women,” but more on that later) as potential baby factories, rather than considering them people at all. The implication that what’s valuable about women is their potential ability to carry a pregnancy is extremely troubling. But that’s not the only piece of the puzzle that made me irate.

This announcement carries with it the connotation that all women of childbearing age are basically about to get pregnant, or at the very least, could become pregnant at any time. But of course there are huge differences in fertility and sexual activity — and a woman’s reproductive potential actually varies quite a bit and involves many different factors. As it happens, there are myriad women of childbearing age who can probably ignore this advice without much risk at all, including:

That's a pretty big group of people ignored by the CDC’s latest recommendation, which is flat-out ridiculous. I am a queer woman married to another person with a uterus. So yeah, CDC, I sometimes enjoy a delicious beverage, and I rarely think, “but suppose I'm pregnant and don't know!”

As a queer mother with an infant, being repeatedly told that I am insignificant and don’t count in matters of public health wears me down.

Also, though it's absolutely true that many people don’t know that they are pregnant for the first several weeks of the pregnancy, most women who are at "risk" of becoming pregnant actually do know how babies are made. The assumption that if a (straight, cisgender) woman isn’t on birth control, she must be out there drinking and having unprotected sex with nary a thought to the possibility of pregnancy is infantilizing and insulting.

It’s also, unsurprisingly, gender essentialist and transphobic. Trans and nonbinary people are almost always left out of the discussion about public health, but that doesn’t mean it shouldn’t distress us when it happens. Defining women as “people who have the ability to get knocked up” is so incredibly limiting and ignores the fact that trans men and nonbinary people do get pregnant too. But apparently, the CDC doesn’t think that those people, or their fetuses and babies, are important enough to issue statements about. As a queer mother with an infant, being repeatedly told that I am insignificant and don’t count in matters of public health wears me down. And I still don’t get ignored nearly as much as trans and nonbinary folks. Our families, our children, and our lives, ought to matter just as much as anybody else’s.

But aside from all of that, let's look at the medical reasons for this recommendation. The American Congress of Obstetrics and Gynecologists (ACOG) position on drinking during pregnancy is that "[fetal alcohol syndrome] is most likely to occur in infants whose mothers drank heavily (3 or more drinks per occasion or more than 7 drinks per week) and continued to drink heavily throughout pregnancy, but it also can occur with lesser amounts of alcohol use. Even moderate alcohol use during pregnancy (defined as one alcoholic drink per day) can cause lifelong learning and behavioral problems in the child." ACOG continues:

There is no safe level of alcohol use during pregnancy. Alcohol can affect the fetus throughout pregnancy. It is best not to drink at all while you are pregnant. If you did drink alcohol before you knew you were pregnant, you can reduce the risk of further harm to the baby by stopping drinking.

However, a look across the pond shows us that even though we speak the same language, and have access to the same scientific studies, American doctors and British doctors differ in their attitudes when it comes to pregnancy and alcohol. While I was pregnant (I was too sick to drink even if I had wanted to) and in bed reading everything about pregnancy that I could, I found this difference fascinating. The U.S. version of the website BabyCenter reads:

All public health officials in the United States recommend that pregnant women, as well as women who are trying to conceive, play it safe by steering clear of alcohol entirely. So do experts at the American College of Obstetricians and Gynecologists and the American Academy of Pediatrics.

If you do decide to drink alcohol after your first trimester, you should limit your intake to one or two units, once or twice a week. Although experts say the risks are probably low, it’s known that the more you drink, the higher the risks for your baby. It may be safer for you to cut out alcohol completely, as it can be easy to underestimate how much you’re drinking, especially at home.

Though both websites agree that the absolute best thing to do is to abstain from drinking entirely, the U.K. website provides expectant women a more moderate approach, offering advice and information on what occasional and moderate drinking may mean, rather than demonizing women for choosing to have a glass of wine.

Everyone needs to be equally responsible for their own sexual decisions, and yet the CDC perpetuates the idea that women with uteruses are the the only ones with any responsibility.

I’m not trying to downplay the dangerousness of fetal alcohol syndrome by any means. It’s a real thing and one we should all be aware of and cognizant of, but to talk about it as if it will happen to every child whose gestational parent had one sip of beer is disingenuous. Scientists and research don’t know quite yet how much alcohol (if any) is safe, even if we do know that the risks increase with amount. And practically speaking, how many friends do you know who conceived their totally healthy kid on a night that was not their most sober ever? Many.

Some will claim the CDC news as news just about protecting babies. And yet, it specifically asks women to abstain from alcohol, placing the burden for any fetuses created squarely on their shoulders. But it could have just as easily called upon men (and other people who make sperm!) to avoid having unprotected sex with women who do choose to drink alcohol. Don’t men (and other people who make sperm!) also bear some responsibility for the fetuses and the children which they help to create? Everyone needs to be equally responsible for their own sexual decisions, and yet the CDC perpetuates the idea that women with uteruses are the the only ones with any responsibility.

It’s not just that the CDC could have benefited from more inclusive language, though that definitely would’ve helped. The entire basis for making a recommendation like this is problematic at its root. As a feminist, as a mother, and as a queer woman, I am so disappointed to find the CDC devaluing women in such a grossly misogynistic and biased way.

If the CDC actually wants to protect potential children from the very real dangers of fetal alcohol syndrome, there are real, tangible, and important things that it can do. It can encourage and promote the use of reliable methods of birth control for those who wish to delay or completely prevent pregnancy. It can promote access to safe, legal, abortion for those carrying pregnancies they don’t wish to. It can encourage all people to drink moderately and responsibly when they do drink, which is really good for all of us and would significantly decrease the risk to fetuses. It can also give both men and women (and every gender and identity interested in carrying a pregnancy and becoming a parent) access to the most up-to-date, relevant, and useful information pre- and during pregnancy so that every individual involved feels equipped to make choices that are best for them, whatever they may be. Instead, they chose to go about it in the most sexist, anti-choice, gender essentialist way possible.

More Like This
Mom Gives Birth To Record-Breaking 16-Pound Baby
22 Valentine's Day Pregnancy Announcement Ideas Sweeter Than Candy
Fun, Sexy Maternity Lingerie, For When The Mood Strikes
Here's What Pregnant People Actually Want For Valentine's Day
What Parents Are Talking About — Delivered Straight To Your Inbox