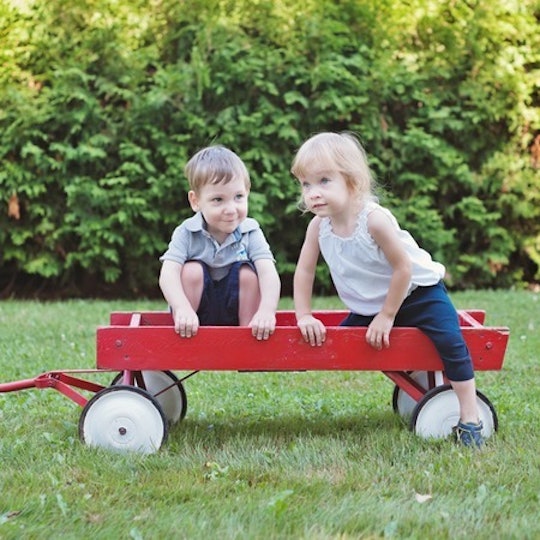 Naming a human being is a pretty big responsibility. In most cases, it ends up being their name for life, and can actually have implications for their future success. At best, you’ll nail the naming game, choosing the perfect, not-too-common-yet-not-too-weird name that will suit them and won’t cause them too much grief. But what happens if you screw it up and pick wrong, choosing something that just doesn’t fit, or that is constantly mispronounced, or that, well, your kid just ends up kind of totally hating? What happens if they want to change it? The truth is that I don't care if my kids decide to change their names. Mostly because I changed my own.

More Like This
18 Best Sand Toys In 2021 For Babies, Toddlers, & Kids
Vaccinated People Can Ditch Masks. Where Does That Leave Kids?
Here's The Deal With Babies Who Sleep With Their Eyes Half Open
The 7 Best Water Tables For Your Little Ones

I worried about this intensely back when I was pregnant with my twins — not just because I had two babies to name, but also because I was one of those kids who hated their names. My parents, bless their hearts, gave me a first name and two middle names, and coupled with my always-mispronounced maiden last name, it was a mouthful. My first name at birth was Cherie — French, for “darling,” bien sûr — and I spent the first eight years of my life wishing it were Emma (a lovely, common English name that seemed like perfection to a young girl growing up in the UK).

It was, I now realize as an adult, a beautiful name, and one my family loved, but it became the bane of my existence for a few reasons. Firstly, no one else had it. Sure, later on there was First Lady Cherie Blair, but by that point I had long left the country and changed my moniker, so that didn’t help. Secondly, no one could say it properly. It always, always, became the more-familiar Sherry, which, while also a beautiful name, was not my name. But perhaps most importantly, it didn’t feel like me. It was pretty and delicate and flowery, and I wished for a name that had more substance, more strength. So I changed it, unofficially, when I was 8 years old and never looked back.

When I was pregnant and pouring over baby name websites, I felt strongly that I wanted to try and make sure my children wouldn’t have to go through what I went through. It’s not easy to grow up disliking your own name, but it’s also not easy to just decide that you aren’t going to be called that anymore. So I worried, and picked apart every single name we were considering — which was not that difficult, as our “considering” list only ever had a handful of names on it. At one point, I was certain that we’d never find the right names, that my kids would come into this world still being referred to as Baby A and Baby B, and that they’d end up hating us for not bestowing upon them a proper identity (there was basically no possibility in my pregnant-woman mind that my kids wouldn’t hate me for something).

I thought of my mom, the one who’d chosen Cherie for me, her first child (my dad got to pick my first middle name, Alana, which is ultimately what I chose to go with when I changed it), and I wondered whether I’d broken her heart by disliking it so much that I got rid of it as my first name forever.

Of course, in the end, we did choose names, and it all went down much easier than I ever imagined. One day, while watching some scary reality show about labour and delivery that no pregnant woman should ever watch, one of the newborn babies was named Madeline. It was a name I’d heard a million times before but had never really considered until that day.

I called my husband and said, “what about Madeline?”

“I like it,” he said. “Madeline it is.” (Except we ultimately chose the French version Madeleine, because clearly I inherited my naming skills from my mother.)

A few weeks later, having zero boys names on our list, we were watching an episode of Criminal Minds (which, again, no pregnant woman should ever watch), and I said, “what about Reid?” after the character Dr. Spencer Reid. I’d said it only half-seriously — who names their kid after an television FBI agent? — but my husband loved it. “Yes! Reid! That’s his name.”

For the remainder of my pregnancy, I mentally debated every possible pro and con I could think of for those names, refusing to tell anyone what we were planning on calling them. And then I gave birth prematurely at 25 weeks, and had to write something down on the name tag stuck onto each of their incubators.

How painful it must have felt to know that the one name you picked was one that made your child cringe.

“Madeleine and Reid,” said the nurse who was initiating our shell-shocked selves into the terrifying world of the NICU. “I like it.”

As Madeleine and Reid spent more time on the outside of my body, being referred to regularly by the names we’d given them, I started to fall in love with our choice more and more. They just seemed like such a Madeleine and Reid, whatever that means, and I was so happy with it. But now, not only did I hope they’d be happy with their names so that they could avoid any misery down the line, I also hoped they’d be happy with their names because it might just break my fragile heart if they weren’t.

It was the first time I’d ever considered that, as a parent, I would of course form an attachment to the names I chose for my own children. I thought of my mom, the one who’d chosen Cherie for me, her first child (my dad got to pick my first middle name, Alana, which is ultimately what I chose to go with when I changed it), and I wondered whether I’d broken her heart by disliking it so much that I got rid of it as my first name forever. She’d surely chosen it because she liked it, and surely she hoped that I would too. I imagined how difficult it had probably been to hear me call myself Emma, and then how doubly-difficult it must have been when I told her I wanted to change my name permanently before starting my new school in Canada. How painful it must have felt to know that the one name you picked was one that made your child cringe.

But then, I realized something else. Not only had my mom allowed me to hate my own given name despite her own feelings about it, she actually let me change it. She could have easily brushed it off, could have easily assumed it was a silly childhood phase I’d naturally grow out of, could have insisted that I keep my name as it is because she gave it to me, damn it. But instead she said, “OK,” and then she called me by that name for the rest of my life.

I’ll trust them with that choice the way my mother trusted me, confident in knowing that they know their own hearts even better than I do.

I see now, as a mother myself, what a courageous act that really was. I’m sure she must have felt judged for it (being a mother is a constant exercise in enduring judgment), and I’m sure she must have wondered if she was doing the right thing by giving me the option to re-name myself at such a young age. But she did it, because she loved me, and because she wanted me to be happy, even if that meant discarding the name she picked for me herself.

I love my children’s names so much — I think they suit them and are lovely and I hope they enjoy them as much as I do. But if they don’t, if they hate them and wish I’d chosen differently and one day announce that they’d like to change them, I’ll be on board. I’ll trust them with that choice the way my mother trusted me, confident in knowing that they know their own hearts even better than I do, and that giving them this option will be a deep act of love, even if they probably won’t realize it for another 20 years or so.