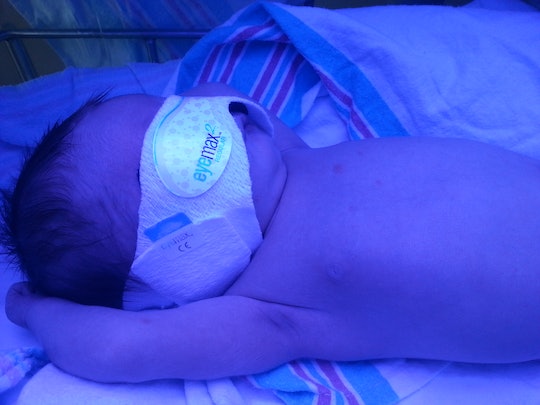 My daughter was born with four congenital birth defects: complete agenesis of the corpus callosum (ACC), colpocephaly, neuronal migration disorder, and septo-optic dysplasia. She was diagnosed while I was still pregnant, at 28 weeks. All of these disorders affect her brain, and they're all just as scary as they sound. When I first learned about the defects she'd would be born with, the last thing I wanted to do was talk about my sick baby. But I quickly learned that whether I wanted to or not, I was going to have to. Just like her diagnosis taught me that I cannot control her development, I also learned that I can't control what other people might say or think about her. Even though she was still in utero, my job as her mom was to protect her from negativity and ignorance. Now that she's here, my mission is to try to positively influence how we think about sick babies — starting with my own.

At my 28-week ultrasound, my daughter's diagnoses were still very much a question mark. The effects of ACC can range from severe developmental and cognitive delays to "normal" development, so a person born with it could be clumsy, uncoordinated, and have low muscle tone. They also might have difficulty with speech, understanding nuance or sarcasm, and miss subtle social cues. Her colpocephaly prognosis depended on the degree of her abnormality, She may experience seizures because of her neuronal migration disorder. And her septo-optic dysplasia might affect her vision and pituitary gland function. But none of it was concrete. The problem with ACC and the many issues affecting the brain is that we don't know how a person will be affected until they just... are.

When my partner and I were read this laundry list of disorders and their corresponding symptoms, we were terrified, angry, and completely blindsided. In the time it took to complete an ultrasound, my worst nightmares about pregnancy came true. We had no idea what to expect. All we knew was that our daughter was going to be born with four congenital birth defects. For the last few months of my pregnancy, I agonized and obsessed over her list of potential issues. I felt like I had failed her. The idea that I had caused, even unknowingly, these problems in my daughter's brain devastated me. It took a long time for me to be able to speak about them without bursting into tears.

I felt like my child had been made into a sideshow. A car wreck for people to slow down and gawk at. She was what was broken in their game of broken telephone, and it felt like they enjoyed talking about it.

After a lot of those tears, worries, and anxieties had been shared with my partner, family, and closest friends, I decided that I might be ready to begin explaining her issues to the people in my life who weren't essentially "need-to-know." At a friend's birthday party, I tested out how the words felt with a former coworker, explaining the abnormalities the doctors had found and how they might affect her in the long run. My coworker reacted like you would expect: She was supportive and sympathetic, asking the appropriate follow-up questions and trying to inject some optimism into the moment, telling me everything would "be OK." Only it wouldn't. I tried to stay positive and hopeful, but the entire time my smile felt brittle on my face.

Soon after telling her, I received text messages from people I hadn't heard from in months telling me how sorry they were to hear about my daughter. My closest friends at work reported hearing acquaintances discussing my daughter's brain around the break room and people started asking them about my daughter's diagnosis. I felt like my child had been made into a sideshow. A car wreck for people to slow down and gawk at. She was what was broken in their game of broken telephone, and it felt like they enjoyed talking about it.

They reduced her to nothing more than her sickness; she was a list of deficiencies.

I knew there was a good chance there was no ill intention behind my coworker's loose lips, and that maybe I was letting my pregnancy hormones get the better of me, but I couldn't shake the anger and the feeling of betrayal that came with knowing people were talking about my baby. Because whenever someone said, "Have you heard about her daughter? Poor Ceilidhe," they were implying that there was something to be pitied about a person with ACC. In my mind, they reduced her to nothing more than her sickness; she was a list of deficiencies.

One of my biggest fears was that these potential symptoms might lead to difficulties with her peers. I was bullied as a child and it left me with emotional scars that I still feel today, and I never had a disability, disorder, or disease to contend with. So I felt hypersensitive about what people thought and said about my baby. The need to shield her even in the womb, to change people's perceptions, was overwhelming. My protective maternal instinct was strong. A lioness, a Grizzly bear, a cast member of the Real Housewives had nothing on me. Until that point, what was "wrong" with my daughter had been the focus of everyone's discussions, and admittedly my own, as well. I was ready focus on who she was rather than what birth defects she had.

I asked my coworker if she wouldn't tell other people about my daughter. I wasn't ashamed of the baby growing inside of me, but it was still difficult to talk about — especially when confronted out of the blue. As expected, she was totally understanding and apologetic; not realizing the impact her actions had. The next thing I did was recognize the inherent ableism in my own feelings and fears. Just like anyone who might have pitied us, every time I lamented my daughter's birth defects, I emphasized her disorders over who she was.

By talking, educating people, and embracing her differences, I got the chance to change the narrative. I ended the call on their game of broken telephone and began a new conversation that was infinitely more hopeful, and one I love to talk about. I got to talk about my baby girl.

By talking about it, I celebrated the person she would one day become instead of mourning the "normal" child I thought I lost. The love I had for her, even then, was strong and powerful, and in person and on social media, I wasn't shy about explaining her birth defects. I also wasn't shy about explaining her: who she was, what she was like, and how very much I loved her. No one wants their baby to be sick. No one wishes illness or disease on another person's child. But it happens. Every day. Cerebral palsy or childhood cancer, Down syndrome or Spinibifida, or any number of the congenital birth defects that affect one in 33 babies every year.

I wanted to talk about my daughter's birth defects because she was going to be born with four of them, and the reality was that each one may make it difficult for her to reach her developmental milestones. They may make it hard for her to talk or read or grasp complex and abstract concepts. They may make her clumsy or uncoordinated or socially awkward. But by talking, educating people, and embracing her differences, I got the chance to change the narrative. I ended the call on their game of broken telephone and began a new conversation that was infinitely more hopeful, and one I love to talk about. I got to talk about my baby girl.

And I can't wait to talk about it.