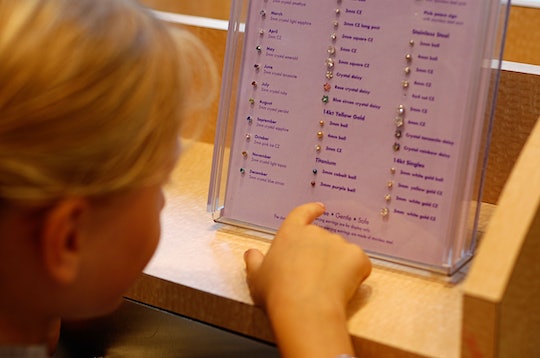 The One Reason Why I Won't Pierce My Daughter's Ears

The first time my ears were pierced, I was 6 years old. I thought I was going to love having pierced ears, but instead, I hated every second of that first piercing trip. It was so bad, in fact, that I promised myself I'd never pierce my daughter's ears. Before my 6 birthday, I told my mother I wanted to wear pretty jewelry. I said I wanted to wear “cute earrings,” and I asked her if, for my birthday, we could get my ears pierced. (In fact, if I recall correctly, the only acceptable birthday presents that year were pierced ears, a puppy, a pony, or a baby sister.) So one Saturday in early spring, we did it. We went to the mall. We went shopping, and I got my ears pierced — not with the adorable dolphins I'd been eyeing up, but with two small, faux gold CZ studs.

To say the experience was as I imagined would be a total lie. Of course, at 6, I didn’t know what to expect. I assumed I'd sit in that big, high chair in the window of the piercing store, snuggle their oversized “piercing” bear, feel a quick pinch, and — ta da! — the deed would be done. My ears would be sparkly and shiny. My ears would be pierced.

Some might say that getting your kid's ears pierced isn't a "big deal," but it is to me. It's a really big deal.

What I didn’t expect was that getting my ears pierced wouldn’t be easy. Shortly after I got them done, I found out the hard way that I was allergic to the jewelry in my ear. To make matters worse, I was also allergic to the cleaning solution they provided. And because that wasn't enough, the piercing gun actually got stuck in my ear mid-pierce. (The jewelry jammed while piercing my right ear and the piercer panicked. So did my mom. So did I.)

Time is fuzzy when you're a kid, but I remember that day so vividly. In the aftermath of all the errors, my piercings lasted less than six weeks. And though it's far from the only reason why I've decided not to pierce my daughter’s ears, it is one of the reasons. After going through it myself, I'm of the belief that no small kid needs to endure this kind of trauma (yes, trauma) for societally-imposed beauty standards. No baby or toddler needs their ears pierced. And no child, girl or boy, should have someone else decide what happens to their body.

There's no reason to for me to make a decision for my daughter that, in a few years, she can make on her own. Beyond that, why should I push something on my daughter that she may actually never want?

Franky, I can't think of single reason why I'd want to modify my daughter's body without her will, so I won't.

My family holds no cultural or religious beliefs, at least as they relate to piercing or body modification. Piercings are not a part of our heritage, and while I have 14 myself, they were not acquired because I had to get them. All of my piercings came to be because I wanted them. When the time comes for my daughter to make that decision (assuming she ever does), if she wants to get her ears pierced, we'll talk about it. But right now there's no reason to for me to make a decision for my daughter that, in a few years, she can make on her own. Beyond that, why should I push something on my daughter that she may actually never want? Why not let her decide for herself if she wants an ear piercing, or any piercing, when she gets older? When she can make up her own mind?

The State Of Piercings ties into my larger parenting philosophy. I want my daughter to know that it's only up to her to decide what she wants to do with her ears and her body. Some might say that getting your kid's ears pierced isn't a "big deal," but it is to me. It's a really big deal. I want to empower my daughter with autonomy over her body and over her life. If she wants something, we'll support her. If she doesn't, we'll stand by her. It's less about the fact that she can "take them out" if she doesn't like them, and more about the fact that I want my daughter to be able to decide that she wants them because she likes them. Right now she's a toddler, and her preferences change by the hour.

Also every time you pierce your skin, you create a wound. How that wound heals — and if it closes or doesn't close — depends on the individual being pierced and their body. (Don’t believe me? Check here and here and here.) Yes, the hole may close, but if you going into the situation hoping it'll close, why pierce his/her ears to begin with? I don't want to make decisions for my daughter and hope that things will right themselves.

Although the American Academy of Pediatrics’ says ear piercing is safe at any age, even they advise parents to wait to pierce until the "child is mature enough to take care of the pierced site [himself or] herself”? And since my daughter can't wipe her own ass... well, I'm not exactly ready to force an open wound onto her skin just so she can look "cute" and "girly" in a few pictures.

But if my daughter comes to me at 6 or 8 or even 10 and tells me she wants her ears pierced, I'll happily educate her on piercings. I'll tell her what she should expect from the procedure and during the healing process. I'll teach her how to clean them and care for them, and then I'll accompany her to the nearest APP (Association of Professional Piercers) piercer or shop. I won't take her to an unregulated piercing parlor in the mall. I won't take her somewhere where untrained professionals pierce body parts. (I'm pretty sure my first "piercer" didn't even wear disposable gloves.) And I won't take her to any establishment which uses unregulated and potentially unsanitary instruments, like a piercing guns. (Though piercing guns may seem the quickest and easiest way to pierce a kid's ears, according to the APP, piercing guns are problematic at best and dangerous at worst.)

So here's the thing: Whatever you decide to do in your home, and with your child, is your business. But the same goes for me and my family. I just won't permanently modify my daughter in the name of vanity. I won't pierce my daughter’s ears before she has time to decide if she even likes earrings, or let alone that she wants them. And I just won't allow myself to be selfish when it comes to my baby’s body. Because the greatest gift I can give her is a strong sense of self: a say, an opinion, a voice, and an identity. Piercing her ears without her permission would strip her of everything I want her to be, and I'd rather not take that chance.