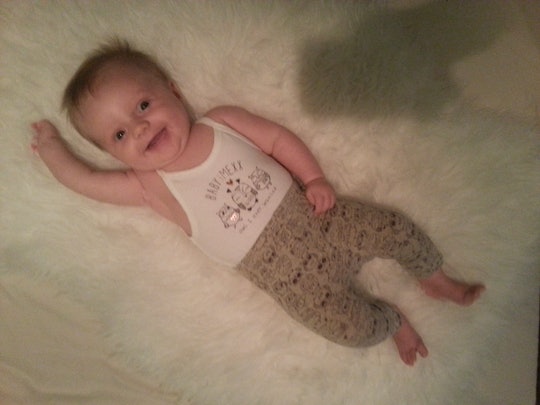 The One Reason Why I'll Never Police What My Daughter Wears

My daughter is just 9 months old and other than throwing a quick temper tantrum when she is made to wear a hat, she could not care less about the clothes I put her in. But I know that one day, probably sooner than I think, she'll begin to care about her clothes. As a feminist, whose partner is a feminist, who plans on raising a feminist, I've struggled with what I'll do when that time comes. What if she chooses to wear the same Halloween costume everyday for weeks? What will other parents think of me? What if she wears booty shorts or mid-drift baring tops? What will other kids think of her? Whether we like it or not, our fashion choices leave us open to criticism and judgment and I want to protect my child from them; it's a parent's natural instinct. But I don't want to do so at the cost of her self-worth. I will never police what my daughter wears because doing so would deny her one of her first opportunities to express herself, and giving my daughter the chance to be herself is probably the best protection I can offer her.

Judging women and girls for their fashion choices has almost become a sport. Television shows tear down a woman's individual style and build her back up into something deemed "acceptable" by society's standards and call it entertainment; they dissect women's clothing choices and pits women (and yes, men) against each other. Why would I need to police what my daughter wears when the rest of society will do it for me?

Telling my daughter to dress a certain way to avoid male attention not only teaches her that she is responsible for her own potential victimhood but demeans the intelligence and humanity of every boy and man she interacts with.

And we don't even need to go to Hollywood to see it happen. At the start of every school year, my News Feed is inundated with commentaries on the sexism of school dress codes. Dress codes that make it clear that a girl's body is something to be ashamed of, something to be hidden. Dress codes that sacrifice her personal expression for what is deemed "appropriate" by arguably patriarchal standards. Dress codes that demand that our daughters cover their bodies to an almost hyperbolic extent so as not to distract the boys in their class.

At the end of the day, no matter what her body will look like, she can chose to dress it however she likes.

Telling my daughter to dress a certain way to avoid male attention not only teaches her that she is responsible for her own potential victimhood but demeans the intelligence and humanity of every boy and man she interacts with. Men and boys aren't animals. They are completely capable of controlling any sexual urges that may arise when they see a bra strap or a belly button or skin above the knee. Doesn't continuing to treat them otherwise only provide excuses for the few that choose to act like the animals we expect them to be? Every time my daughter leaves the four walls of our home, her clothing will be critiqued: by her peers, her school, her boss, or by the people passing her on the street; the least I can do is protect her from those judgments within them.

Growing up, I received those critiques and judgments in my own home, and I distinctly remember moments when my own mother policed what I wore. On my first day of high school, I so badly wanted to wear a new denim skirt — that went to my knees — with a pair of black high-heeled boots. My mom told me I had to wear my white Keds instead because my own choice of footwear was less appropriate for school and more "appropriate for street walking." I decided to compromise in the way that most teenagers do and wore my Keds out of the house but changed into the boots once I got to school. The flaw in my plan came when I didn't take the boots off to go home and my mother caught me walking through the door in them. On another occasion, I wore a shirt that didn't cover my bra straps. I sat in our car on the way up to the barn for my horseback riding lesson that evening, listening to my mom scold me for not wearing a strapless bra with that top because to do otherwise was "unladylike."

And there were other micro-aggressions: like when my mom would make a face at an outfit I'd put together or threw out a flippant comment about a new top I was excited about. All these small moments when I took pride in how I looked, when I felt good about what I saw in the mirror were dulled by the embarrassment of hearing my mom say, "What are you wearing?" And those bigger moments when I felt actual shame that my mom might have thought less of me, that she might have been disappointed in me. I internalized a lot of those experiences as a pre-teen and teenager and used them, I am ashamed to say, to judge my peers. To this day, I still catch myself seeing a woman's bra strap and thinking, "Is that really necessary?"

My mom's mom judged what she wore. My mom did the same to me. But my daughter will have a different experience.

I know, without a doubt, that my mother's reasons for policing my style didn't come from a malicious place. I took the opportunity to bring it up with her recently and she confirmed my thoughts. She didn't think I was a "floozy" — her favorite word to describe women with, what she deems, loose morals — or a loser. She wanted to protect me because "other people can be cruel." Boys can be mean, she said, and girls can be worse. She saw her child in adult clothes and could only imagine the negative comments I might hear. But by trying to protect me from them, she instead delivered those cruel words.

She admitted, quite bravely, that she had been judgmental. I appreciate my mother's candor and, now that I am a mom, understand her need to protect the one person she loves most in the world. But I also hope to break the cycle here. My mom's mom judged what she wore. My mom did the same to me. But my daughter will have a different experience.

Every day, I ask others not to judge me based on my appearance. I ask that if I have to be judged at all, that it be on my knowledge, my kindness, my contribution to the greater good. But if I really had a choice, I wouldn't be judged at all. My inherent value as a human being would be enough. How hypocritical of me would it be if I ask my daughter not to judge others based on their appearance, but I can't afford her the same basic right?

My daughter was blessed with her own beautiful body. Right now, it is small and soft. She has rolly thighs and chubby cheeks. Her wrists have creases and her elbows have dimples. One day she will grow taller. She might thin out and she might not. She might have long legs like me with the same strong thighs that made horseback riding so easy and finding the right pair of shorts so hard. She might have her father's thin waist or his hairy Hobbit feet. But at the end of the day, no matter what her body will look like, she can chose to dress it however she likes.

Her body, her rules doesn't only apply to her future dates. By teaching her that she can take pride in her body and that she can express that pride however she chooses will, I hope, gift her the confidence that I often lacked growing up. And taking pride in herself — for when her mom isn't there to protect her — is the best protection around for all those other people who will police what my daughter wears.