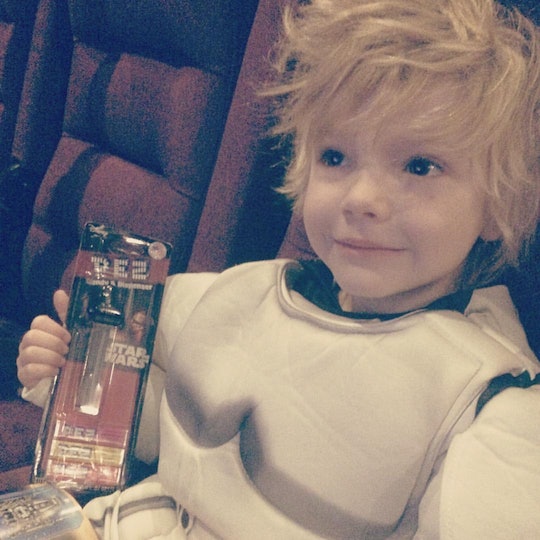 The One Reason Why I'm So Glad We Vaccinated

It began with an occasional cough. My husband was teaching English at a local university at the time, so he was exposed to every cold that rampaged through the freshmen dorms. But this cough… this cough didn’t shake in a few days. It lingered. Then it started to get worse. The cough turned to a mucus-y hack. I began to worry about our baby. What if he got this cough, a cough which turned to more of a mucus-y hack every day? I had no suspicions it would turn out to be so serious, but looking back, I'm so glad we vaccinated our son.

But neither of us ever started coughing. Instead, my husband's only got worse. The coughs doubled him over, left him blue and gasping. Talking brought the fits on quicker, but they still came, several times an hour. We thought it was bronchitis. I made him go to the doctor. Blaise had been vaccinated. I had been vaccinated. But we were still worried.

The doctor listened to my husband's coughing. He watched him double over, turn blue, and grab his sides in pain. “You have pertussis,” he said, “otherwise known as whooping cough. Are you in contact with any infants or immunocompromised people?”

Following the doctor's visit, my husband flew home in terror, coughing all way. He didn’t know if we’d passed the incubation period. He didn’t know if 6-month-old Blaise or I had been vaccinated, if we were going to come down with it next. He hacked and tried to watch the road. When he got home, he had the first asthma attack he’d had since high school. It wouldn’t be the last.

But we were safe.

In the hospital, after Blaise was born, they’d asked if I wanted the TDaP shot: the inoculation that prevents tetanus, diphtheria, and pertussis, according to the CDC. I said yes, because I couldn’t recall the last time I’d gotten a tetanus shot. I remember the Band-Aid, shiny and peach, with a cotton lump beneath. I held my baby while they did it.

But while I was blasé about injecting myself, I'd hemmed and hawed about vaccinating my son. I was worried about overwhelming his immune system, something that I now know is impossible. In my opinion, the CDC recommended so many vaccines too soon. The vaccines contain chemicals like mercury and formaldehyde, according to the CDC's ingredients list — bad things, as far as I'm concerned. Though research had debunked the Autism study, I didn’t really want to shoot my kid up full of aluminum. I’m a hippie at heart, and didn’t think injecting my kid with chemicals was a smart parenting decision. I felt like I could trust the herd immunity to protect my son. But I did my research. I read the scientific articles, back and forth; I dug through the pro- and anti-vaxx websites. And in the end, science won. At my son’s two-month appointment, he got the full complement of shots (excluding Hepatitis B) recommended by the CDC: the rotavirus vaccine, the pneumococcal vaccine, the HiB vaccine, and his DTaP. He also got an inactivated polio vaccine, which I was particularly proud of, because my father had been one of the last cases of wild polio in the United States.

My husband had pertussis, but I set my worry for him aside. He was busying with cough syrups and inhalers. I was worried Blaise would go into the hospital in respiratory distress. Right now, we couldn’t remember what vaccines Blaise had received. This was a Friday night. We called the emergency pediatrician line. They said they couldn’t pull his actual shot records, because they were at the office (my heart dropped), but if he had received the usual complement of two-month shots, he’d gotten a TDaP, which would protect him against pertussis.

My precious, perfect son could have cracked a rib, could have started asthma attacks and damaged his pretty pink lungs already, at 4 months old. He could have been sick beyond belief.

“He got them all but Hep B,” I sighed. I felt like I’d been holding my breath since I’d heard the word "pertussis." “What about you?” my husband asked. “I got a TDaP in the hospital,” I said. “You don’t remember; you had gone to get us breakfast.”

Blaise and I were safe. My husband, however, was not.

His cough, if it was even possible, got worse. It was a deep, phlegmy thing with the characteristic pertussis whoop. The coughing would start gently, then rise in intensity until he was doubled over, chest-clutching, blue. They gave him some serious cough syrup, the kind you don’t get unless you’re really bad off. He had to take medication to sleep, or the coughing fits woke him up (and me, and the baby). The serious coughing, the kind with the fits, lasted a month, and he cracked a rib from it eventually. All you can do is tape it up, so he did, and kept going. A more gentle, normal cough lingered for three months. He continued to have asthma attacks throughout, and now, six years later, still uses an inhaler. His last asthma attack was two weeks ago. His doctor says it’s damage the pertussis did to his lungs.

I thank God I fell down on the side of science. I thank God we didn’t miss our two-month appointment, or decide Blaise could wait on a TDaP. I never saw my son turn blue from coughing; I never saw my son unable to catch his breath. He’d have been hospitalized, at the very least, and subject to all the IVs and aspirators and nebulizers they had to shove at him. My precious, perfect son could have cracked a rib, could have started asthma attacks and damaged his pretty pink lungs already, at 4 months old. He could have been sick beyond belief.

But he didn’t. He wasn’t. All because of one small shot that saved him so much pain.

More Like This
Abbot's Formula-Producing Plant Can Reopen In As Early As 2 Weeks — Now What?
Can You Help Your Baby’s Hair Grow?
17 Best Potty Training Products For Toddlers
From Captions To Gifts, These Are All The Kindergarten Graduation Ideas You Need