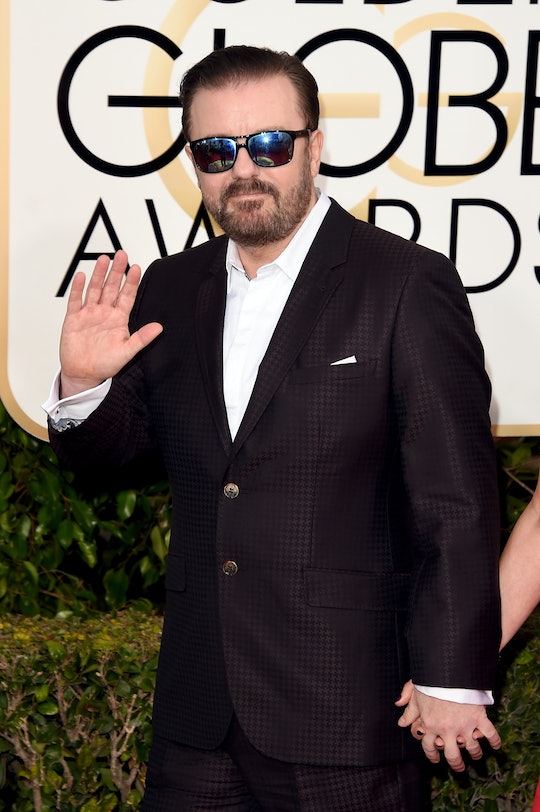 Everyone was waiting for Ricky Gervais to do or say something offensive during his monologue. And boy, did Gervais deliver in the first .5 seconds of the show. He did get a little nasty joking about Caitlin Jenner and Transparent, tasteless jokes about a woman and a series that mean so much to so many viewers and activists and individuals transitioning. But Ricky Gervais' jokes about the gender pay gap were real, on point, and as he said himself, "funny because [they're] true."

Of course, it's not funny that women in Hollywood are historically paid less than their male counterparts. Gervais began by pointing out Jennifer Lawrence's essay about equal pay that was published earlier this year. He then he reminded everyone that plumbers and working class people everywhere were wondering "how to live off of just a few $52 million a year."

After jumping to other jokes, he eventually came back to equal pay issues. Noting that there are lots of "all-female" remakes being done these days, like Ghostbusters. Instead of using that moment to capitalize on the power that these all-female remakes could have on the industry to revamp and rewrite its own compensation rules, Gervais, instead, had everyone sort of grimace-laughing at how much the studios can save on the cast and make money at the box office.

Twitter was torn about whether Gervais is a teensy bit feminist or just taking needless shots at women:

Joking about it might not get women anywhere when it comes to getting equal pay, but it never hurts to make sure everyone's talking about it. Still, there's no denying that Gervais could have done better.