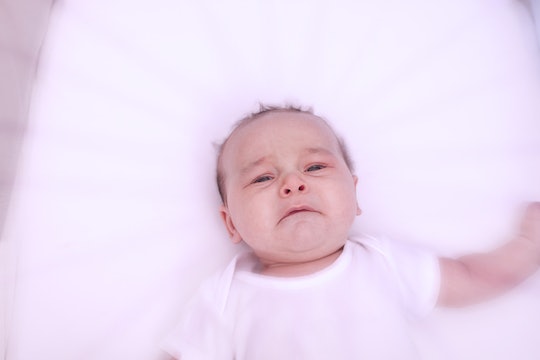 Sleep training your little one can be an arduous task. It can also be a bit defeating when your baby doesn't instantly take to it, and you're beginning to have doubts over the method you chose. The Cry It Out method is controversial, with some parents saying they'd never and others saying it's the best way to teach your baby to sleep independently. Once you recognize the one sign Cry It Out is working, however, you may be motivated to stick with it.

The Cry It Out method is exactly what it sounds like — parents or caretakers let the baby cry without going to console him until he eventually soothes himself. It can sometimes feel like a very effective form of torture for all those involved, but for some families it works like a charm. Although it may be difficult to embrace the method when you're in the trenches — trying to get your little one to go to sleep and enduring extended bouts of crying on end — that doesn't necessarily mean that the method isn't the right one for you. It may just mean that it's not coming as easily to your baby as you'd like. Additionally, as sleep consultant Nicole Johnson wrote on The Sleep Site, some babies cry again when sick or teething, which, of course, you shouldn't ignore.

Since Cry It Out is a relatively simple method, there may not be as many clues that it's working as there would be with another sleep training method. But the hint that it is working is your baby's crying bouts are getting shorter. According to the online message boards on the Berkeley Parents Network website, the first night of crying when using Cry It Out is typically the longest. Some babies are "trained" to sleep soundly after one night using the CIO method, while others need a bit more time. Some people argue that CIO stresses the baby out, but according to a 2016 study published in the journal, Pediatrics, a gentler form of Cry It Out, where the caregivers adjust the principles of the method to suit the baby's temperament and personality, helps babies sleep longer over time. As the study went on, babies woke less during the night, as well. Additionally, Dr. Marc Weissbluth, a pediatrician at Northwestern University and the author of Healthy Sleep Habits, Happy Child, told Slate that, if done properly, the Cry It Out method should work in about three days.

Though challenging, sleep training can be beneficial for babies, caregivers, and other family members alike. Cry It Out is just one (sometimes brutal) method of promoting sleep. But look for the ever-shortening crying jags, and stick with it, if you believe it's right for your family.