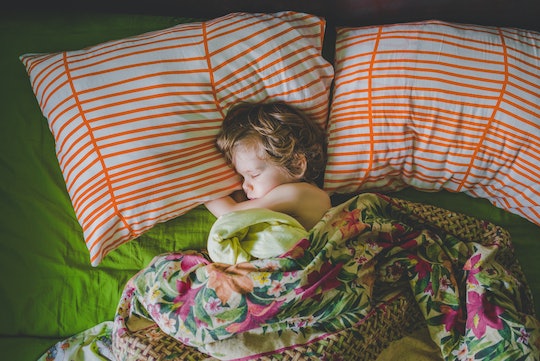 Why You Should Give Up On Sleep

Maybe you are one of those lucky people whose toddler likes to sleep. Maybe they crawl happily into their own cribs at night, stick their thumbs into their mouths, and are drowsy and docile as you read them a bedtime story. Maybe you’re able to creep out and leave your lovelies sleeping soundly in the glow of their nightlights for the next ten to twelve hours. Or maybe the idea that there is a “sleep solution” out there is a hallucination.

I don’t have any sound advice on how to beat the bedtime blues, not for baby mamas or for toddler mamas. I no longer believe in miracles, or sleep consultants, or logical outcomes to well-planned strategies. All I have to offer to moms new and old is this: bedtime is a bitch. It might be easy for stretches at a time, but it will, inevitably, be hard again because an evil jellyfish will take up residence under your child’s bed, or your daughter will develop a fear of the dark which no night-light will assuage because, as she will impatiently point out, when you close your eyes, everything is dark. Duh, Mom.

The problem isn’t the sleep-training methods themselves; it’s that my daughter is human.

My daughter has never been an easy sleeper. The hourly meltdowns that marked the four month sleep regression feel like only yesterday. I can still see my husband hobbling in with bags of wine and chocolate to prepare us for our first attempt with the “cry it out” method, which, miraculously, worked, until approximately 3 a.m. (It never, ever even once worked after 3 a.m., with my breaking point being approximately two hours of unceasing hysteria). And I can still summon the sick feeling that settled in my stomach as I listened to another worn out mom talking about the eight-month sleep regression. There is a 12-month regression, too, did you know? Then another at 18 months, and then comes the mother of all sleep regressions at 2 years old. What cruel game is this, where every time I figure out the answer, the riddle shape-shifts, I have often wondered. Or is a developmental calendar littered with “wonder weeks” and “sleep regression” minefields not cruelty at all, but a kindness, a device invented by an exhausted mother who understood that, sometimes, we need intermittent illusions of victory to get through another heavy-lidded day.

I don’t mean to knock the methods; in fact, I have no right to knock them, having relied on them myself. I’ve worked hard at establishing bedtime routines, creating sleep-friendly environments, honing my stamina to endure hour upon hour of pre-dawn screaming. And to some success; I’ve reaped many hours of uninterrupted sleep. The problem isn’t the sleep-training methods themselves; it’s that my daughter is human. As she grows and changes, so do her sleep issues, and at 2 years old, she is far beyond the reach of any sleep help book.

The only advice I have, which seemingly isn’t sound at all, is to give up.

First, stop searching for reasons why. I used to drive myself crazy, hunting for budding teeth in my daughter’s gums, pumping her full of Tylenol because there had to be a reason why she screamed bloody murder every time I lay her down in her crib. More recently, I’ve driven myself crazy wondering what my daughter saw or heard that convinced her there is a skeleton living in space between her bed and the wall. If there was something I was doing wrong that was causing her night terrors. Overstimulation? Insecurity because I left her crying at daycare drop-off? The truth is, most of the time, there are no reasons. For many, maybe even most babies and toddlers, sleeping poorly is normal. It’s linked to growth spurts, brain development, the staggering amount of sensory inputs they interpret during the day and process every single night.

Then, give up on trying to dictate what bedtime, and sleep itself, should look like. While I am pretty routine when it comes to what time my daughter goes to bed, I let her every-changing needs dictate what happens at light’s out. Instead of getting frustrated that “Twinkle Twinkle” and a back rub no longer does the trick, I focus on what does soothe my daughter, and do my best to make bedtime fun. We laugh, we sing, we kiss her stuffed animals and make up silly stories. If she’s afraid, I encourage her to express her fears, and invent solutions, like putting a witch hat on Peppa Pig so she can scare away pesky skeletons. I also leave both our bedroom doors wide open, so when my daughter does inevitably wake up in the wee hours of the night, she can easily toddle into my room and cozy up next to me in bed. Sleeping with my favorite little person nestled close to my heart certainly beats listening to her cry for hours on end, or enduring 5 a.m. wake ups with the grumpy toddler these moon-lit mornings inevitably spawn.

A lot of the time, my daughter doesn’t want to go to sleep because she is exuberant, full of joy over the simple fact of existing in this big, messy world.

None of this has made my daughter a fantastic sleeper. She still goes through cycles. There are weeks on end of wonderful sleep, bedtimes with no tears or tantrums. And there are weeks on end when bedtime is a battleground. What’s changed is that I’ve stopped getting frustrated and angry when she doesn’t sleep the way I’d like her to sleep. Once I see past my own desires, it’s easy to see things from her perspective, even to feel compassion for my thrashing little girl. Sometimes she’s scared. Sometimes she’s overtired. A lot of the time, my daughter doesn’t want to go to sleep because she is exuberant, full of joy over the simple fact of existing in this big, messy world. I understand, of course I understand. Most nights, I don’t want to go to sleep at bedtime, either. I, too, want to stay up late talking to my partner, reading books, listening to music, taking atmospheric walks, watching Bill Maher. There aren’t enough hours in the day for all the living I want to do, and I love that my daughter feels that, too.

What more could I ask for as a mother than a child who is so curious and engaged with the world that she has no time for rest? So happy that she wants to dance until dawn? When I spin it that way, I realize that I am one of the lucky ones, and I’ve been so all along. Even weeping hot tears from burning, sleep-deprived eyes at four in the morning.

More Like This
Here's When Your Baby Might Start Sleeping Through The Night For Real
17 Best Potty Training Products For Toddlers
From Captions To Gifts, These Are All The Kindergarten Graduation Ideas You Need
Fun Ways To Celebrate National School Nurse Day