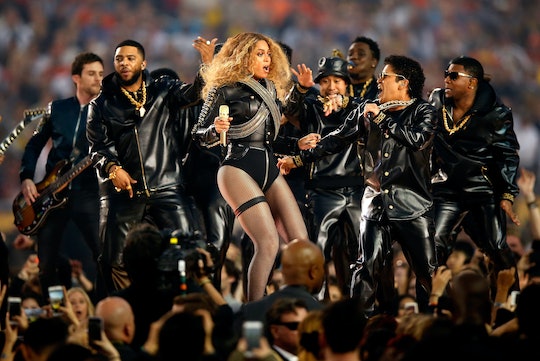 The One Super Bowl Reference You Didn't Realize Beyonce Made

The Super Bowl 50 halftime show was an interesting performance (because what else would you expect to come from sticking Beyoncé, Bruno Mars, and Chris Martin all on the same stage?). Beyoncé was fierce as ever, though, and looked amazing (nobody is surprised). One thing that most people missed at first, though, was how Beyoncé channeled Michael Jackson during the halftime show. Her black-and-gold leotard would have been gorgeous on its own, but was made even better when CBS revealed that it was a tribute to Jackson's Super Bowl XXVII performance. Queen of pop, meet the King.

Jackson gave a stellar halftime performance in 1993, and it often makes lists of top halftime shows in Super Bowl history. He was the first solo act to take on the halftime show, and viewership actually increased when he took the stage, according to Metro. Because it was Michael Jackson.

If anyone could don his threads, it'd be Beyoncé the day after releasing her call-to-action song "Formation." Between her fashionable nod to Jackson's legacy, the clips of Whitney Houston singing the anthem, and Bruno Mars killing it on stage? The Super Bowl did a great job of pulling past and present together to give viewers all the feels.

Take a look at the subtle tribute Beyoncé gave the king of pop below.

For those of us who didn't catch his 1993 performance, here's a peek at the greatness that was Jackson at the Super Bowl in 1993, where he seemed to emerge from the top of a screen to wow the crowds:

Needless to say, the internet loved it.

Thank you, Super Bowl. Now that was a much better throwback than Chris Martin's jacket. Long live the king.