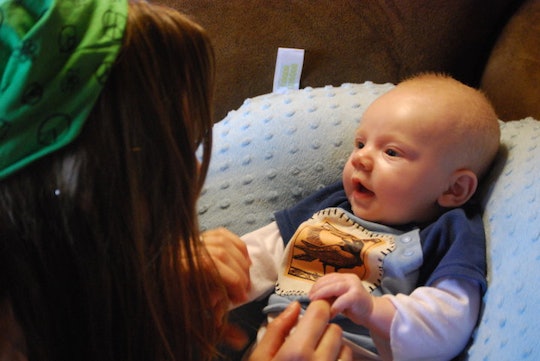 The One Terrifying Moment That Threatened My Breastfeeding Success

The day my 9 month old chipped his tooth, we'd gone to one of our favorite restaurants for lunch. They sat us in the back booths. Blaise ate our pickles while we dined on fancy salads and fried green tomatoes. He’d maul the middle until only the dark skin remained and I saved him a peach sliver from my salad. Blaise had behaved admirably through the meal: no outbursts, no wriggling. Everything was lovely until, just after the bill came, he stood up on the seat and, as if someone had kicked his legs out from underneath him, fell down.

More Like This
Experts Offer Tips On How To Wean — Whenever You’re Ready
18 Best Sand Toys In 2021 For Babies, Toddlers, & Kids
You Will Not Regret This Perfect Baby Pool From Target
Here's The Deal With Babies Who Sleep With Their Eyes Half Open

His mouth opened in a cry. On the way down, his front teeth hit the table with an ugly thunk. He screamed. We cradled him and shushed him and soon he had returned to his normal cooing self. Then we examined his teeth. His front left tooth had a teensy chip missing. I freaked out. “This is going to screw up breastfeeding,” I said to my husband. “It’s going to hurt. We have to get something done.” “It’ll be fine,” he said, because this is what he says in these situations, partly to make me feel better and partly as some kind of autonomic response. But I knew right then and there that it wasn't going to be fine. My baby's chipped tooth was the one terrifying moment that threatened breastfeeding success and ultimately, my relationship with my son as a breastfeeding mom. Since Blaise was my first son, I didn't know what, exactly, to do. I didn't know how a chipped tooth would affect us both. And that was terrifying for us all.

Unsurprisingly, Blaise's chipped tooth wasn’t fine. After lunch I lifted up one shirt, pulled down a cami underneath, and opened my nursing bra. Blaise lunged for my breast, as usual and a searing scratch, scratch, scratch shot through my nipple. It felt like breastfeeding Count Dracula. We needed this fixed, and fast — but it was a Friday afternoon.

We had no options other than to get this unknown dentist to treat my son. I'd beg if I had to. I 'd plead. I worried he wouldn't be great at dealing with babies. I didn't know what would happen, other than his tooth maybe getting shaved down. I had no idea what to expect.

I found the numbers for local La Leche Leaders and called. Because, I figured, this had to do with breastfeeding, and they were breastfeeding gurus, they could magically tell me how to fix it. Even though they’re supposed to be available 24/7, they have actual lives, so no one picked up until around 3 p.m. By now, dentists were closing and the situation was getting dire. Trying to breastfeed Blaise was agonizing and painful. But he needed to eat. After I'd explained the situation, the woman on the line asked, “Can you nurse through it during the weekend and get a dentist to file it Monday?”

My nipples would be shredded by Monday, I thought. And I thought Blaise had milk/soy protein intolerance, so pumping and using formula weren't an option. My kid couldn’t eat until this got fixed, and I needed that to happen preferably sometime within the next two hours. She thought, then she gave me the name of a dentist who had worked with nursing mothers before. “I don’t know if he’ll have an opening, though,” she cautioned. I figured they would shave the tooth down, but I didn't know how long it would take, or what it would involve.

We were told to sit and wait. I just wanted to breastfeed my baby.

I hung up. My husband called the dentist while I walked and jiggled the baby, who still wasn’t very happy that his boob had been taken away. “OK,” I heard him saying. “No, she can’t wait. OK. OK. Thank you so much.” He hung up.

“The doctor can see us as soon as we get over there,” he said. “They don’t close until 5.” So we strapped Blaise into his carseat and drove. And drove. And drove. Up one interstate, down the other, off into the sketchy side of town and through it. We finally ended up in a polite cul-de-sac headed by a enormous wooden building. Several dentists’ names adorned the sign out front. We were, at least, in the right place.

Blaise had fallen asleep. At least he wasn't hurt from the whole experience. I carefully unbuckled him and snuggled him on my chest in a woven wrap. He stayed down. Lucky for us, because when we went inside, a nurse met us with a mound of paperwork. After that, we were told to sit and wait. I just wanted to breastfeed my baby.

We waited. And waited. And waited, in a room full of toys and bead mazes and kids’ books. Clearly, these dentists saw only children. That gave me some confidence. I prayed Blaise wouldn’t wake up, because he’d want to nurse, and no way was I going through that situation again. Luckily my husband had given him some sips of water while we were making phone calls, so I didn’t have to worry about him dehydrating. Finally, they called us back to see the dentist.

Please God, I prayed, please don’t let this involve anesthesia or holding him down or painful pokey instruments. Don’t let this give him a complex for the rest of his life. I was terrified. We had no options other than to get this unknown dentist to treat my son. I'd beg if I had to. I 'd plead. I worried he wouldn't be great at dealing with babies. I didn't know what would happen, other than his tooth maybe getting shaved down. I had no idea what to expect.

The dentist introduced himself and shook our hands. I took Blaise out of the wrap and he woke up, wide-eyed. He looked around at the row of metal-and-cushion chairs. “So he chipped a tooth?” the dentist asked. “Let’s take a look. Mom, will you sit in the chair and hold baby facing away from you?” I felt more trepidation than any other time I’d ever been to the dentist.

He gently opened Blaise’s mouth. “Yep, he chipped that front tooth all right,” he said. “Let’s take care of that. Mom, hold him here and here.” He showed me two points of restraint. “I’m going to file it real quick. It won’t hurt him a bit.” Apparently, this is common practice for babies with chipped teeth.

I'm grateful I knew to call La Leche League, to ask for help, to be stern in my need for my son. I don't know what would have happened if I hadn't.

After all the fuss, it was anti-climactic. He came at Blaise with a file, and though Blaise tried to twist away, the dentist was quicker than I’d thought possible. He zip-zipped over his tooth and moved away. Just as soon as he'd started, he was finished.

“That’s it?” my husband asked in disbelief.

“It should be,” the doctor said. “Do you want to try nursing him?”

Blaise was crying. I pulled one shirt up and one shirt down, unhooked my nursing bra. Blaise lunged. But this time, I felt no pain, just the normal suck, suck, suck of a latched baby. He no longer had a chipped tooth. The dentist had fixed it. We thanked him profusely for saving our breastfeeding relationship, and on a Friday afternoon, no less. He waved it away. They also waved away payment, because it was so quick. After all the fuss and the driving and the worry, he’d saved my ability to nurse Blaise. He'd given us all relief.

I'm grateful I knew to call La Leche League, to ask for help, to be stern in my need for my son. I don't know what would have happened if I hadn't. Probably I wouldn't have nursed Blaise anymore — even after we found a dentist on our own, and took him there the next week, he probably would have lost his latch and gone to formula. I hadn't known you could shave a baby's tooth until Blaise chipped his, and then I kind of figured, well, that's what they did to my tooth when I chipped it. So I suppose that's what they'll do to Blaise's. And all my fears about the dentist were allayed. He even wanted me to nurse in the office, presumably to check his work. Blaise still has one tooth a teensy bit smaller and flatter than the other. You can't see unless you look closely, but it's there. A memory of some terror on my part — but a memory of relief, too. And a memory of gratitude.