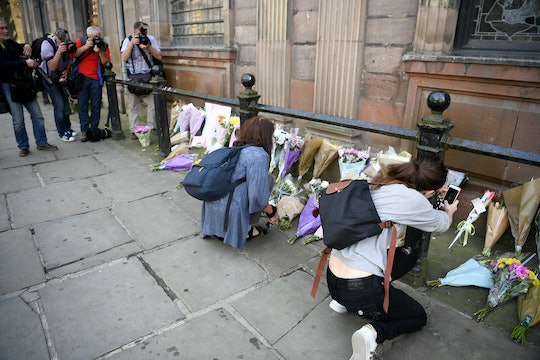 The One Terrifying Truth About The Manchester Attacks

I remember the excitement leading up to the night of my first concert — my fidgeting fingers, my impatient feet tapping the floor under my desk. I remember the looks my mother and I shared as I watched her apply her makeup while I put on her "special" earrings. I remember dancing euphorically with my mother, finding refuge in the music and with each other, as we tried to forget what we were leaving behind at home: my physically abusive father, who a few days before had pulled my hair, pushed me to the ground, and threatened to choke me.

It was not the first time my father had been violent, to either my mother or myself. The "excuses" behind his outbursts were endless, as was the violence itself, and my mother and I could only do so much to escape it. We both, however, had music. And that evening, for arguably the first time in my young life, I had a safe space where my mother and I could sing and dance and be ourselves, without fearing that we would be the targets of male violence.

I was reminded of this feeling last night, when I heard about the terrorist attack at an Ariana Grande concert in Manchester, which killed 22 people and wounded 59 others. As I read the stories of bombing victims like 16-year-old Georgina Callander, who tweeted to Ariana Grande a day before the concert, saying she was "so excited" to see her; or the terrifying eyewitness accounts from women like Nicola McGraw Murray, who told NBC about rushing out of the venue with her 12-year-old daughter Olivia to avoid being crushed alive, I remembered what it was like to be a young teenage girl looking for reprieve in a sea of other concert-goers, closing my eyes and swaying my body and letting music take me away from my life of violence.

Now, for so many young women who seek out the same, a pop concert is no longer a safe place. It is just another target of male violence. So now that a music venue is no longer a sanctuary, where can young women go? Where can they find comfort and safety in the melodies of others?

It's not yet clear who was behind the attacks, or what the attacker's motivations were. While ISIS has claimed responsibly for the attack, and the police have identified 22-year-old Salman Abedi as the bomber, they have not yet found evidence to support the former claim. Yet as many on Twitter have pointed out, the attack clearly seemed to be targeted at young women. Grande's fan base is predominantly young and female, and according to a BuzzFeed reporter who attended an Ariana Grande concert in 2015, the estimated average age of a Grande concert attendee is 16 years old.

Whether the symbolism was intentional or not, the bombing served as a sinister reminder that when you're a woman in the world, you're never truly safe. That's particularly true because it took place at a pop concert, an event that is a rite of passage for many and, for girls like me and women like my mother, nothing short of a sanctuary.

The bombing served as a sinister reminder that when you're a woman in the world, you're never truly safe. That's particularly true because it took place at a pop concert, an event that is a rite of passage for many and, for girls like me and women like my mother, nothing short of a sanctuary.

For me, pop music saved us from the terror of my daily life. I remember hiding in my room pretending to be a Spice Girl (Posh) or a member of Ace of Base, while my mother would stop during her mid-vacuum stride to strum an air guitar, carelessly swinging her blond hair in a circle. The moment the garage door opened, signaling my father's return home from work, we'd shut the music off and brace ourselves for the coming storm.

18 years ago, when I was 12, my mom found tickets for an Aerosmith concert. She'd bought the tickets with the "I'm sorry I hit you" money my father regularly gave her, and told me to prepare myself for an evening of respite from the horror that faced us at home. That evening out alone with my mother was arguably my first foray into womanhood. Even though we couldn't take that place or that music with us, we could take the memory of our first concert together, and hold onto it when we walked back into our home. Back into violence.

I was in the midst of developing my identity as a young woman when I attended that concert, and the same can be said for many of the young women who were either killed or whose lives have been permanently altered by the attack in Manchester. They attended a concert to be free, to look up to their idol Ariana Grande — who is unapologetically sexual, who exudes power when women are told they have none — and to be safe. They were in a space that openly celebrated womanhood in all of its complexity, and they were attacked because of it.

These girls were in a space that openly celebrated womanhood in all of its complexity, and they were attacked because of it.

The importance of pop music as a medium for allowing young women to forge their burgeoning identities cannot be overstated. For many young women, the first concert is a rite of passage, a way for them to assert their independence in the face of a society that is constantly trying to thrust them into pre-scripted gender roles. In a 2014 Telegraph article about teen-pop culture, Jude Rogers, a music journalist, recalls her New Kids On The Block fandom and her first concert during the NKOTB reunion tour, explaining how pivotal it was in shaping her overall identity:

The gig took me back to the days of being a fan for the first time. I looked around the room and saw women all the same age as me. We’d all grown up together and that gig took us back to this moment when we were first making our own identities that are distinct from our parents. It allows you to explore your own imagination, and your sexual feelings about boys in a safe way. When you’re 11 or 12 you don’t know what those feelings are.

An attack on a venue in which young women are not only free, but encouraged, to express themselves and explore a wide variety of confusing emotions that make up the female experience, sends a distinct message: women are safer if they are not seen. They are safer if they don't celebrate themselves.

But for the countless young women who were celebrating and exploring and defining their femininity with pop music, the threat of violence was no longer a threat. It was calculated, carried out, and purposefully realized. It destroyed the safety young women so desperately seek, once again making women ask themselves, the world over, where they can be safe.