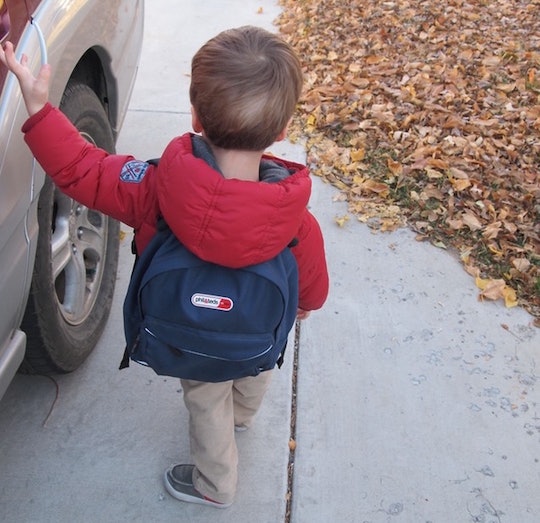 The One Terrorism Threat That The GOP Debate Didn't Cover

National security and the fight against terrorism took center stage at the GOP debate hosted by CNN Tuesday night. Before the debate even began, the intro showed a montage of ISIS footage mixed with the candidates on the campaign trail, promising to stand strong against the threat of terrorism in America. This debate was the first in the wake of the Paris attacks and San Bernardino shooting — the former the work of ISIS, the latter inspired by jihadism — and each candidate dove straight into their plan to fight the war against radical Islamic terrorists.

It makes sense for the candidates to highlight that threat. That kind of terrorism is terrifying. But it's not the threat that is on my mind each day. There are too many mornings when I send my son to school and I leave feeling panicked and sick. A scene from the news will flicker through my mind. I'll leave him after waking from a nightmare and wonder if maybe it was a premonition. What if all those close calls were leading up to today. What if?

That heart stopping fear I feel has nothing to with radical Islam and foreign terrorism. Those what ifs are there because of gun violence. That's a type of terrorism too, and it has nothing to do with ISIS. So why wasn't it a part of Tuesday night's conversation?

Each candidate opened with remarks on how to keep America safe from terrorism. Sen. Ted Cruz came into the debate strong with promises to “utterly destroy” radical Islamic terrorists. Chris Christie nodded to the terror threat made against the Los Angeles school district Tuesday morning, imploring people to think of the fear those children and their parents would feel as they returned to school the next day.

The candidates spent more than half of the debate talking tough against terrorism, but in spite of their strong words against terrorism in the United States, they failed to address gun violence throughout the debate. There was no mention of radical Christian terrorism in the wake of the attack on Planned Parenthood. There were no solutions given to curb the violence that truly strikes fear in the heart of parents and children across the country.

The candidates fed upon the fear that Americans feel in the face of ISIS threatening our country, but as a mother, I rarely feel unhinged by the fear of Islamic extremists opening fire in my parents’ church or creeping into my child’s preschool. I don’t feel that sort of fear when I look at my Muslim neighbors or when we talk about Syrian refugees. I feel fear, certainly, but the source of my fear is not what the Republican candidates were talking about.

The numbers don’t lie: there are far more Americans killed by gun violence and mass shootings than by acts of terrorism in the US. So if you want to talk about the real threat to our nation, maybe we should take a look at where our lives are being lost. Maybe we should focus on the staggering number of children we have lost to guns over the past three years: 555 children under the age of 12. If you want to placate the fear of parents, gun control needs to be a part of the conversation.

I am all about keeping America safe. That is why I think we need to address terrorism in all its forms. Of course ISIS is a major threat and concern. But it is not the ONLY concern. If the Republican candidates want to win my vote, terrorism needs to be addressed across the board. I want my children to feel safe when they go to school. I want to feel safe when I go to my OBGYN. Until sensible gun reform is on the agenda, that feeling of security will never be a reality. It's about time Republicans realized that the real fear facing America isn't "them," it's "us."

More Like This
Priyanka Chopra Posed On The Cover Of 'Vogue' With 1-Year-Old Daughter Malti
Does The FDA's Plan To Limit Lead In Baby Food Go Far Enough?
Marie Kondo Gives Up Tidying Post-Kids, Sparking Joy For Moms Everywhere
10 Great Podcasts That Will Keep Your Kids Entertained On Your Next Family Road Trip
What Parents Are Talking About — Delivered Straight To Your Inbox