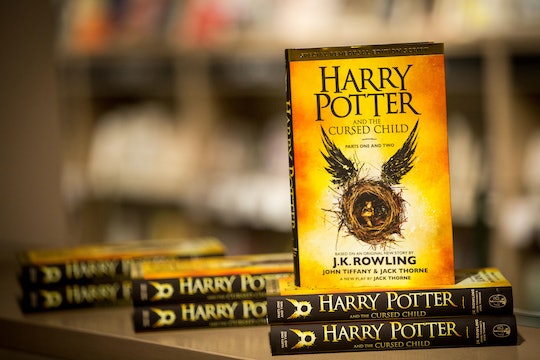 When we last left Harry Potter, he was loading his sons on the Hogwarts Express. His middle son had just turned 11 and was scared about attending school. “What if I’m in Slytherin?” a nervous Albus Severus Potter asks his father. Harry goes on about his son being named for a Slytherin, and says, basically, “It doesn’t matter to us.” But clearly, Albus thinks it does. And he worries about it even more in the play. For the record, you've been warned: there are spoilers for Harry Potter & The Cursed Child ahead. The play and the continuation of the Harry Potter story focuses on the universal difficulties, frustrations, and worries surrounding parenting, especially when the parent and child are having problems. In short, the conversation on parenting is the one Harry Potter & The Cursed Child theme that all parents should pay attention to — because it's something we can all relate to.

Of course, Albus is sorted into Slytherin with his new BFF, the geeky Scorpio Malfoy, whom he met on the train. And thus begins the real conflicts between father and son. Harry spends the play trying to figure out how to parent Albus and Albus spends his time inadvertently trying to be like his father: to fix what he sees as his mistakes. Albus also rejects his father’s attempts to parent him: to keep him away from Scorpius, to give him the old blanket that’s the last relic of Harry’s mother. A new character, Delphi, even gets in on the childhood angst when she’s revealed to be none other than the child of Bellatrix Lestrange and Lord Voldemort. But the heart of the story, as far as I'm concerned, is about learning to give your children what they need as individuals.

It's those generational mistakes, I think, that Harry's concerned about, the problems that pass down through families because of unexamined parenting. I worry about the same thing.

The Cursed Child is, at the heart, a play about parenting, about fathers and sons and fathers and daughters. Every parent will recognize themselves in it, Potterhead or not; Harry spends the play at sea with how to deal with Albus. He even confronts his own father figure, Albus Dumbledore. “I have proved as bad a father to him [Albus] as you were to me,” Harry tells his old headmaster. “Leaving him in places he felt unloved — growing in him resentments he’ll take years to understand. ”

I also worry that the damage from my childhood — the yelling, in particular — will emerge in my own parenting. It’s always hard not to yell. But it’s doubly hard not to yell when you come from a family of people who yelled. And every time I lose my temper and yell at my kids, I worry that I’m enacting my childhood. Harry worries about the same thing; he talks to Dumbledore’s portrait and talks about making many of the same mistakes with Albus that his father-figure made with him. It's those generational mistakes, I think, that Harry's concerned about, the problems that pass down through families because of unexamined parenting. I worry about the same thing.

I worry that, as the years go on, I won’t see him for himself, the way Harry won’t see Albus. I'll see, like Harry, a frustrated version of what I want him to be.

The relationship between father and son in The Cursed Child is tangled and complicated. Like Harry, everyone has a child they don't quite mesh with, because the child's a different a person entirely (a fact we sometimes forget in our desire to make our children in our own image). Harry says, “I’m a parent — who hasn’t seen his child. Hasn’t understood his child.” I worry about that, especially about my middle child, August. My other two sons are sunny (in fact, that’s the baby’s nickname), easygoing blondes, but August is dark-haired, broody, and obsessive about things, which right now include flashlights and Spinosaurus. He’s the most likely to throw a tantrum and hence the most likely to get yelled at for it. He’s just darker than his brothers, both physically and mentally. I worry that, as the years go on, I won’t see him for himself, the way Harry won’t see Albus. I'll see, like Harry, a frustrated version of what I want him to be. This is also a worry for new parents, who may be blinded by their own love — another thing Harry admits to — and see their baby as a blank slate on which to write (or rewrite) themselves.

The Cursed Child strikes me as close to my own fears, if not my own experience. My children are too young to have the complex issues that Albus and Scorpius face. I do worry about it in little things, however: August doesn't want to do Swim and Gym, a program at the Y where home-schooled kids swim and do physical education. My oldest lives for it. Should I make August go, because I think he should, or respect his desire to stay instead with me?

My father's father never said "I love you." In fact, my father said it seldom. And now, I just forget to say it. Will my children feel unloved because of this?

Harry and Draco discuss this when Harry says he's "a parent who hasn't seen his child — who hasn't understood his child." Draco hasn't understood Scorpius either; in his desire to shield his son from vile rumors, he's only made them worse. He seems unable to talk to his son, particularly about the death of Scorpius's mother, his beloved Astoria. I also worry about being unable to talk to my kids about serious subjects, though I try hard and I'm trying young. I tell them about my depression in ways they can understand; I ask them about how they feel. My commitment to attachment and positive parenting helps with that, and I hope it's enough for when they get older.

Harry also admits to Dumbledore that he didn’t tell Albus that he loved him enough. I worry about this constantly. Usually, my kids are the ones who initiate the “I love yous," and luckily they do that frequently, especially my oldest. But I worry I don’t initiate the “I love you” enough, mainly because I just don’t think to. It doesn’t occur to me. I grew up in a family where no one said "I love you" frequently — the way Dumbledore never said this to Harry, and now, after death, cries about it. My father's father never said "I love you." In fact, my father said it seldom. And now, I just forget to say it. Will my children feel unloved because of this?

Basically, The Cursed Child follows all of kids as they run around trying to be like their parents, or trying to reconcile their own personalities and needs with the ones they perceive their parents want from them. The parents, meanwhile, are not showing their kids what Ginny calls “specific love." She tells Harry that they're not "giving their sons, not what they needed, but what we needed.” And it's true. It's the one thing every parent worries about. There’s a terrible gulf between parent and child in this play, built of frustrated love on both sides. Rowling has written a cautionary tale of loving the wrong way. And though it’s reconciled, somewhat, particularly at the end, it’s still difficult, in the last scene, to bridge that gap. Kids need that “specific love,” as Ginny calls it, that takes in them as a full person with all their needs and wants. If we can take any lesson from Harry Potter and the Cursed Child, it’s that one.