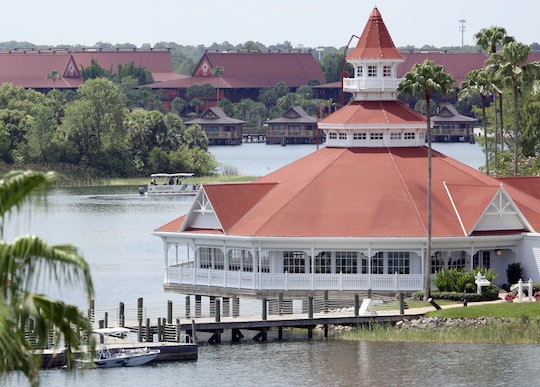 Late at night on Tuesday, June 14, a 2-year-old little boy was dragged by an alligator into the Seven Seas Lagoon at Disney World's popular Grand Floridian resort in Orlando. Although officials initially launched their search for the toddler hoping for the best, a source close to the investigation told CNN that the 2-year-old boy's body has been found. Even though my heart is aching for that poor family and the toddler who must have suffered (and words truly fail me at how horrible that is to imagine) and drowned, people have predictably taken to the internet to voice shame, criticism, and judgment for the family. And it's the wrong, wrong reaction. I think of that family, of the depth of their grief right now, and I know that what happened in the Disney alligator attack could've happened to anyone. It could've been you. It could've been me.

More Like This
How To Celebrate Pride As A Family
13 Things The Best Grandmas Do For New Big Siblings
The Cutest 4th Of July Outfits For Babies, Toddlers, & Kids
This USPS Mail Delivery Truck Ride-On Is A Tribute To Actual Heroes

Comments ranged from: "Prayers for the family, BUT parents need to keep a better watch on their kids especially if they are near alligator infested locations," to, "So what are they going to do about these negligent parents.. they were quick to pull the records of an[d] do something with the parents who let their kid fall into the gorilla exhibit.. They should of had that poor helpless babies hand at all times." When I heard this story, aside from sending up silent prayers that the poor child did not suffer and that the family will somehow be able to survive their anguish, I was horrified by the thought of how many families this easily could have happened to. Because the truth is, it could have happened to any family vacationing on the East Coast. In the blink of an eye, it could've been my own family.

Like any other toddler, she was running around and playing, and not once did I consider that she could be in danger. Not once did I worry that an alligator would come out of the water to snatch her up by the shoreline.

When our family stayed at Disney World in 2012, we couldn't afford to stay at the Grand Floridian Resort, but we did book a Cinderella character dinner at The Grand Floridian's restaurant, 1900 Park Fare, which was a wonderful experience for our children. After the dinner, we wandered out onto the commons area behind the resort, where there were many pools and a waterfront area that was practically empty. Much to our surprise, we were delighted to find that the area was the perfect spot to watch the fireworks from. It was late, well past 9 o'clock, similar to the time this family was relaxing, and you'd better believe my husband and I kicked back and let our kids run around play. At 7 months pregnant, I was happy to just sit down for a second.

Our youngest was only 21 months at the time, just under 2 years old, and like any other toddler, she was running around and playing, and not once did I consider that she could be in danger. Not once did I worry that an alligator would come out of the water to snatch her up by the shoreline. Though we weren't close enough to wade into the water, we definitely wandered around the resort. It was late and if there had been a sign about alligators, I doubt we would have even seen it, even though the resort posts "no swimming" signs. Though it's so easy to say that it would've "never" been us, or you, or that your kids "know better" or that your partner would've "fought that gator harder," the reality is that you don't know that. Now, looking back, what if it had been us on that beach? My family? My kid?

What if it had been yours?

I think a lot of people are imagining this as a family foolishly ignoring signs and letting their kid swim in alligator-infested waters, but I just don't think that's an accurate description. According to CNN, the family was at movie night at the Grand Floridian. These parents let their son walk on what, I remember, was the shoreline, just like I did four years earlier. They let him dip his feet into the water, maybe to cool him off. Maybe he was just playing. Maybe they'd been watching the fireworks, like we were, or unwinding after a long day spent at the parks, like thousands of other families have done and will likely continue to do. Maybe, just maybe, they blinked, and he was gone. Maybe, just maybe, they inhaled — and it was already too late.

Before news hit that the boy had gone missing after the alligator dragged him under (even though his dad tried to wrestle him free), this whole situation is something no one would have thought twice about. I know I wouldn't have. And to be honest, there is no one to blame for what happened because it was a perfect storm of failures. Alligators travel in water, so it shouldn't exactly surprise anyone that they might end up swimming around in an expensive beach in Disney World. Four years ago, that could've been us. And what then? What happened Tuesday night into Wednesday is devastating for everyone involved. I don't want to co-opt their grief, losing a child is something every parent can understand. It's our biggest, deepest nightmare. We understand how they must be feeling because we spend our lives hoping we won't ever have to feel that way. We hope and against hope that we'll never know what this feels like, because on any given moment, on any given day, there's no telling if it could be you. And there's no guide on what to do when it is.

Judging a parent whose kid falls into a gorilla exhibit or who is attacked at a Disney resort by an alligator doesn't prevent those things from happening.

Witnesses have said that the attack happened in less than 30 seconds and honestly, who among us hasn't looked away from our kid for less than 30 seconds? We all try to justify these types of situations, hoping that somehow our judgmental and insightful perfect hindsight in the face of someone else's tragedy will prevent it from ever happening to us. But sadly, it doesn't work that way. Judging a parent whose kid falls into a gorilla exhibit or who is attacked at a Disney resort by an alligator doesn't prevent those things from happening. It just makes us all look like horrible human beings for insisting to stand on our high and mighty pedestals. It's just another example of how judging each other as parents takes us to the extreme and still get us nowhere.

The bitter irony of this situation is that this family was likely having the time of their lives, finally enjoying a trip they'd maybe dreamed of and planned for years. They were probably just hoping to relax after a long day on the beach, looking forward to seeing the world-famous Disney fireworks. Then their child was pulled underwater, their world snatched from them in the blink of an eye. I do not want to judge these parents. They have suffered enough.