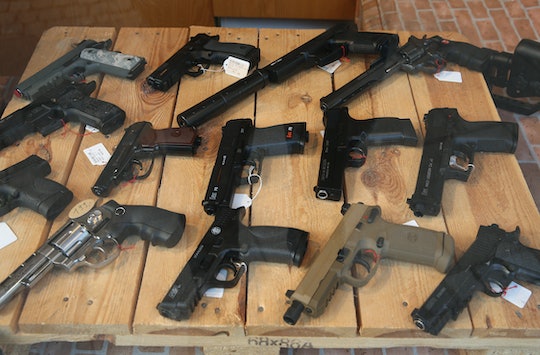 On Thursday, a gunman went on a shooting spree on a Kansas highway and at his workplace, Excel Industries, injuring 14 and killing three. The incident came just an hour and a half after the suspect, Cedric Ford, was served with a restraining order that prevented him from contacting a live-in girlfriend he had previously abused, according to NBC News. People have already begun to question what role mental illness had to play in the case, and the issue of gun control in the United States has, of course, been brought up. But there's one thing about the Kansas shooter that people should be talking about: why was a person with a history of domestic violence allowed to have a gun?

Earlier this month, a Kansas judge issued an order of protection from Ford's girlfriend, who wrote on Feb. 5, "[Ford] became physical by him pushing me then grabbing me. ... He placed me in a choke hold from behind — I couldn't (breathe). He then got me to (the) ground while choking me — finally releasing me." She described Ford as an alcoholic who was violent and depressed, according to CNN. It doesn't appear he was ever charged with a crime, even though the judge granted the restraining order. On the order, she wrote:

It's my belief he is in desperate need of medical (and) psychological help!

This wasn't Ford's first run-in with domestic violence allegations, either. In 2005, Ford was arrested for domestic violence in Florida and charged with battery, although prosecutors later dropped the case. He was still given a "stay away" order to protect the woman, however, who he allegedly grabbed by the neck and punched in the head, according to BuzzFeed News. According to The Washington Times and Heavy, Ford was also arrested in Kansas in 2010 on domestic battery charges, a parole violation, drug possession, traffic violations, and theft. While his criminal records are online, the outcomes of the previous cases were not available.

That means Ford had two alleged counts of domestic violence under his belt — a crime too many people might write off as a dispute between two partners that simply "got out of hand," or as a topic that should stay within a couple's private home. But, according to a report by the Washington State Institute for Public Policy, two or more instances of domestic violence — whether a felony or misdemeanor — puts people at a 50 to 55 percent chance of committing a felony, with a 21.6 to 36.2 percent chance of committing a violent felony, as Ford went on to do.

There is a long list of violent offenders with a history of domestic violence, and, too often, those histories have been ignored. People point to mental illness as a catch-all bucket to explain crime, when, in reality, these tragedies are more likely to correlate with domestic violence, racism, and homophobia. The École Polytechnique shooting in Montreal was fueled by sexism; the Isla Vista murders were committed by a man who resented women for not sleeping with him; the Lafayette shooter had a history of domestic violence — and the list goes on.

How does a person with such a long history of crime and two violent offenses against women get his hands on a semi-automatic handgun and an assault rifle? Why are people who have been convicted of domestic violence allowed to have access to weapons?

The first step we need to take in preventing these tragedies is to make it easier for women to succeed in court when they file domestic abuse charges. According to a 2013 FBI report, in 70 percent of domestic violence cases in which police officers are called to the scene, prosecutors do not file criminal cases.

This is often because there's insufficient evidence to push prosecution through. If officers take pictures of the appearance of suspects, victims, or damaged belongings, the chance of persecution increases by at least 58 percent. Finding witnesses, obtaining emergency protective orders, quickly submitting reports, and arresting suspects can all help push prosecutors to file the domestic abuse as a criminal case and raise the chances of a criminal conviction.

In other cases, victims are reluctant to testify or fail to report abuse in the first place, whether out of fear or hope that their partner may change. There needs to be increased support for victims to file protective orders and have them instated quickly (Ford's girlfriend's order alone took more than two weeks to be served to Ford after being stamped and signed). Victims also need to know that their chances of having their abusers prosecuted stands above 30 percent, and that abusers will be monitored if they're on probation.

The risk to victims is present even when it doesn't manifest in a mass shooting. Even if domestic abusers do not go on to commit shootings like some of the men mentioned, the risk of a domestic abuse victim being killed by their abuser increases by 75 percent when the victim chooses to separate or leave, according to Think Progress.

What the Kansas shooting — and the other mass shootings mentioned above — drives home is a fact that's been ignored for too long: domestic violence isn't a women's issue. It's not a niche issue. It's an everybody issue. There's a need to recognize it as a marker for further violence, prosecute it heavily, and institute meaningful consequences for those convicted. A very good place to start would be to take away abusers' guns immediately and bar them from obtaining further firearms.

So, there's a two-fold importance to recognizing when domestic violence or misogyny is behind mass killings. First of all, it attributes a crime to its real cause and highlights the dangers of ignoring warning signs. People have learned that killing animals is a red flag — and it's time people also acknowledged that domestic violence isn't simply something that goes on behind closed doors. It's a sign that points to deeper problems and an offender's inclination towards violence.

Second, what this case points out is that, while mass shootings are happening far too often, domestic violence is even more pervasive. The world wonders about what kind of a person manages to bring a gun to work and shoot 14 people, but it quietly ignores the fact that there are dozens of people out there who have to live with an abuser and the threat of the abuser's guns day in and day out. Nobody deserves that.

These mass shootings point to a much larger endemic in the United States. If any good comes from the Kansas shooting, it would be authorities learning to disarm domestic abusers — both for the safety of the public at large and for the immediate safety of the fathers, mothers, and children who deserve better.