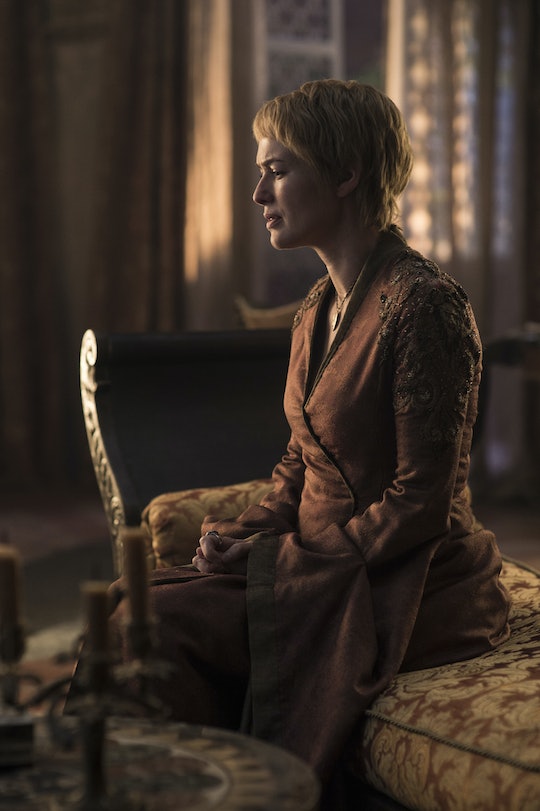 Knowing that Season 6 of Game of Thrones was beginning before the latest book was written to completion, is one of many reasons why avid viewers couldn't possibly assume what was or was not going to happen. Though there many unanswered questions we'd all hoped would be answered during the first episode of the Season 6 premier, one thing was made unapologetically clear from the very beginning: Cersei might be flawed, but she's still a fierce mother. The one thing Cersei's on the Game of Thrones Season 6 premiere got right about moms, and motherhood in general, is your undying wish for your children to be better than you are.

Cersei is flawed; we all know this. If you're an avid — or even passive viewer — you're aware that Cersei cares very little about the people who don't directly affect her in a positive way, and very much about her natural blood family. It's hard to like her, I'll admit that, but I can't help but wonder that it's difficult for modern society to like her because she's ruthless, or because she's a ruthless woman. Many male characters in Game of Thrones are heartless, yet Cersei seems to be the one character who is easily the most hated. I can't blame viewers — as I don't like her either — but what she does is arguably done out of fearless necessity. For her children, for their future, for her family's future, and for her ability to see both come to fruition.

In the Season 6 premiere, as Cersei hears and then witnesses her daugther's death, she gives a speech to her brother (and lover). In it, you realize that although Cersei may be fundamentally flawed in the worst ways, she is also a fierce mother at heart, and no matter what your feeling for her may be, her unyielding thinking when it comes to her children is something all women who are parents can relate to. She wants the best for her children, and is willing to sacrifice herself — or, at least, others — to ensure that her children will not end up like she did.

Talking about Marcella's earliest days in the realm, she recounted to Jaime:

She was good. From my first breath, she was so sweet. I don't know where she came from. She was nothing like me. No meanness. No jealousy. Just good. I thought if I could make something so good, so pure, maybe I'm not a monster.

That is motherhood, in a nutshell: the desire to give your children everything you didn't have; the desire to create human beings who are better than you could ever become. And even though Cersei's speech and her actions are indicative of her true character remains to be seen, one thing is for sure: when it comes to motherhood, no one fights harder, fiercer, or more ruthlessly for their children than the Queen Mother. And if Episode 1 was any indication of what's to come from Cersei, I'd say Westeros better brace itself for a mother scorned. Because that's more deadly to me than dragons or greyscale.