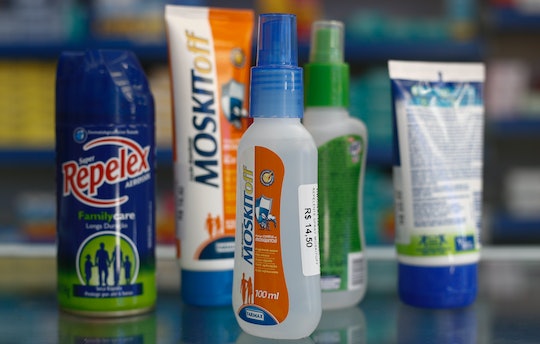 Lately, it seems impossible to avoid hearing about Zika virus. The mosquito-borne disease has become a serious health risk in Central and South America, and with summer around the corner, many fear that the United States may soon see an outbreak of its own. The connection between Zika and microcephaly in infants, a potentially fatal diagnosis, is a scary for women who are pregnant or trying to become pregnant. Many women are advised to use any measure necessary to prevent mosquito bites, including spraying heavy-duty bug repellant — sprays that include the same kind of chemicals moms-to-be are told to stay away from. So, what is more imperative for pregnant women: avoiding mosquito bites or toxic chemicals? Experts say avoiding the bites takes priority. So, the most important thing you need to know going into mosquito season is which bug sprays are safe for pregnant women.

The biggest worry associated with contracting Zika while pregnant is the virus being passed from the woman to her unborn child. When a fetus is infected with Zika, there is an increase risk of microcephaly and other severe fetal brain defects. The virus has also been linked to eye defects, hearing loss, and impaired growth in newborns.

The U.S. Centers for Disease Control and the World Health Organization urge pregnant women to avoid traveling to Zika infected areas—so maybe cancel that baby moon to Costa Rica—but if you cannot avoid your plans or you live in an affected area, you need to protect yourself against mosquito bites. The best prevention plans include multiple steps: wear long sleeves and pants, stay inside during peak mosquito hours, keep air conditioning on and windows closed, and use bug spray (preferably one with DEET or Picaridin).

Fortunately, most existing bug sprays are safe. When applied to the skin, only about 5 percent of the repellent is absorbed into your bloodstream. The CDC and Environmental Protection Agency consider insect repellants safe during pregnancy if used correctly (follow the instructions on the label), althought pregnant and breastfeeding women should make sure their repellents are EPA-registered. The EPA’s website even has a pretty cool search tool to help you find the right product for you.

If you are pregnant and living in an area with potential for mosquito-borne diseases, you should be using a repellant with high levels of DEET to avoid Zika, says Dana Boyd Barr, professor of exposure science at Emory University. While Zika poses a serious risk to the unborn child, Barr told Live Science, “There’s not any strength of evidence indicating that DEET is harmful to a fetus or harmful to a person.” Barr acknowledged that we don’t know the long-term effect of DEET usage, but when faced with the possibility of microcephaly, women are far more at risk by not using repellant than by using it.

Even with these facts in mind, there are some that want to avoid DEET or Picaridin altogether. That is fine, but just know that insect repellants with these ingredients are more effective and will last longer. Pregnant women are advised against using oil of lemon eucalyptus. Other “all-natural” bug sprays made from plants like citronella oil and cedar are safe and they do work but are, again, not as effective so you shouldn’t use them in high risk regions.

TL;DR: If you are pregnant or trying to get pregnant, it is better for you (and your baby) to avoid mosquito bites than to avoid insect repellants, especially in Zika-infected areas. No need to re-work your schedule or travel plans — or, more importantly, that well-deserved babymoon.