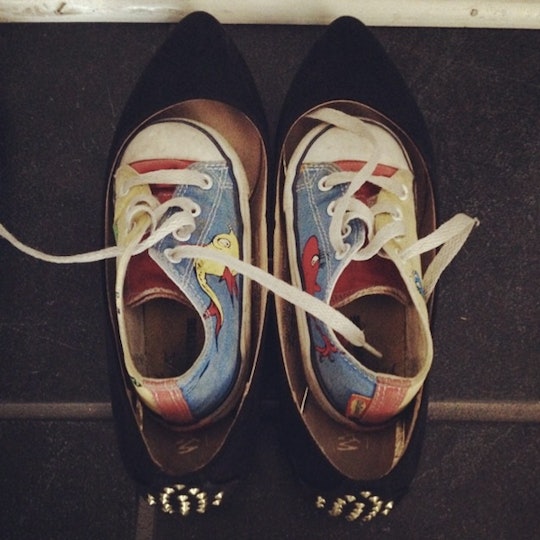 As a working mother, I'm faced with unique obstacles on a daily basis. My role, and any working mother's role for that matter, is a frequently misunderstood one. It's a role that is unfairly questioned, and though one might assume that a paycheck would compensate for the judgment that accompanies it, there really is no number capable of diluting the stigma attached to obtaining it.

There seem to be a troubling number of people who have not yet evolved their thinking beyond that of the Betty Draper era. Their assumption that a woman's only place in the world is basting a chicken or scrubbing a floor is both dated and misogynistic. There is absolutely nothing wrong with a woman whose job is to tend to her home and her family (nothing at all), but it's 2016, and if a career is an inherent part of a woman's identity, she should be able to pursue one without others questioning her motives. It really seems like none of this should need to be said anymore, guys. This all feels so painfully obvious by now that it almost feels like I'm talking down to you to give you such a basic synopsis of the right for women to hold complex identities, but as any working mom can tell you, it does still need to be said, and all too often.

It seems as though we're damned if we do and we're damned if we don't. If we choose to stay at home, we're negatively labeled as a housewife, a woman who serves the sole purpose of reproducing, cooking, cleaning, and rubbing her partner's tired feet after they've spent their day heroically bringing home the proverbial bacon (even though, you know, the house would completely crumble without the women that tend to their homes, their label still unfortunately holds negative connotations). But on the other hand, if women decide to pursue careers, they're assumed to be selfish, self-centered, money-hungry, mad moms who are incapable of feeling basic human emotions.

One of the many, many problems with these labels is that too often neither are seen in a positive or important light, and also that neither of them are always based upon choice, but rather necessity. I'm not saying that either job should garner pity, nor applause, but rather the basic consideration of allowing a woman to choose, to make up her own mind regarding what her role in this world should be.

Not too long ago, I was at the grocery store with my two boys a few hours before I had to head into work. We were perusing the juice aisle, minding our own business when an elderly woman stopped us to ogle over the adorableness of my kids' squishy cheeks. I mean, fair. I get it. She was kind and polite as she conversed with my toddler, and I patiently answered her many queries regarding their ages and names. A few minutes later she said, "Well, I better get out of your hair so your momma can go whip up supper." As I began to turn the cart away I smiled and politely responded with, "No, momma's got to get to work."

To me, the concept of a working mother is a normal one, one that I embrace and support, and it's a role that I happily own. But to her, it felt like my occupation was a red flag; it was a sign of trouble on the home front, an indication that I was somehow an inept mother or that I was being prostituted out into the big, bad world outside of my home.

"Oh, you poor thing." she said as she grimaced, "You must feel so bad leaving those sweet boys behind."

And there it was again: that view of my choices that said I was selfish, that assumption that said I should feel guilty for seeking life outside of a white picket fence that generations of women before me were imprisoned behind. She categorized me into an emotionless robot that was either self-serving and mentally ill, or a defenseless little fawn forced to work against my will because certainly no woman in her right mind would ever choose to subject herself to the elements of employment outside of the home.

But rather than get offended, I felt a similar sadness for her. "You poor thing," I thought. "You were raised in a time where women were belittled; a time when their opinions were irrelevant and their ambitions were inapplicable to their reality; a time when a woman was told where her place was, and a time when she had little say in what her life would entail." I felt bad for this woman who felt bad for me, despite the fact that neither of us knew anything about each other at all.

Oh, does it sound like I'm taking a hell of a lot of liberties in assuming how she feels, what kind of environment she was raised in, and what she believes? Yeah. It really sucks when people do that, doesn't it?

I didn't feel bad that she had likely spent her days in her home raising a family — that wasn't it at all. As I've said before, I think that being a stay-at-home-mom is an enviable role, an important role, and I feel like it too is often a misunderstood role. I didn't feel bad about her role at all. I felt bad about the fact that she likely didn't have a choice in the matter, and that based off of her bewilderment in regards to my employment she couldn't even wrap her mind around the concept that maybe I did choose to work, or that working is an integral part of my identity both as a mother and a woman in general.

Women have come so far in the last several decades, but the fact that there's still the assumption that guilt should follow us on our commute to work tells me that we've still got a long way to go. It wasn't OK in the '50's and it's not OK now.