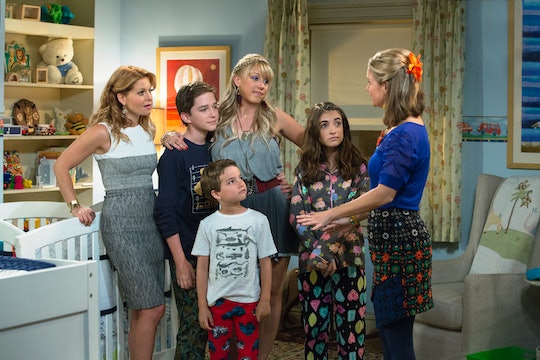 Earlier this week, I snuck downstairs to drink a pot of coffee and mess around on the Internet all alone before my gang of a million (OK, fine, four) children woke up. When I fired up the TV, I was surprised to see that someone had been binge-watching Fuller House. Unbeknownst to me, my husband had been secretly watching the new Netflix series and was only a little bit sheepish when I teased him about it. "Hey, it's nostalgic," he protested, and I guess he's right, although I've never really gotten the appeal of the show in the first place. But I was curious and bored enough to see what my husband had been indulging in behind my back, so I gave myself permission to binge-watch all of Season 1 to see what all the fuss was about.

I was actually never that big of a fan of Full House to begin with. Maybe I missed the heyday of it all since I was so young when it first aired, or maybe I was just the lone person on the planet who found the whole show kind of nauseating. Yet when I watched it this time around, I noticed one thing: Fuller House gets motherhood completely right, and it finally represented motherhood the way it looks for me.

There may be a lot of silly things about Fuller House, but I'll tell you the one thing the show gets right about motherhood: parenting is always a journey best made with help along the way.

Like the rest of the world, I marveled at the ability of John Stamos to defy age and time, felt my heart break a little at how old Steve now looks, and doled out my respect when the show threw some light-hearted shade at the Olsen's twins' for choosing not to appear in the reboot. But Olsen twins aside, though I found the whole Fuller House show a bit cheesy, especially in the beginning, I was also struck by how the entire premise of the show is built on a mother who doesn't to do or have it all, but still feels happy, fulfilled, and lucky to have friends and family on her side.

As I watched, my husband pointed out to me how the original Full House storyline had been built around the concept that a man obviously couldn't handle raising a bunch of girls on his own while working full-time (hence uncles Jessie and Joey moving in), but I wondered if, back when it first aired, could that original show have ever worked with a single mom at its helm? Or have we just always expected that women should be able to handle kids and work and the never-ending laundry list of surprises flown our way? And if the show had featured a single mom back then, would she be written in a way that we'd feel sorry for her because she needed help?

Fuller House challenges that concept, however, and even with something as silly as a nostalgic TV show, I actually found the message that a mother who doesn't have it all (or doesn't have to do it all) remarkably refreshing. D.J. doesn't have it all, and she's OK with that. She isn't a "pity" or a "disappointment" because of that, either. She's just real. Human. A mom. I feel like motherhood is always portrayed as this hectic, frantic, miserable, and relentless task by most TV shows and media, and in some subconscious way, seeing that message over and over sets the standard in our minds that motherhood is supposed to look that way. It's OK if we're all exhausted and miserable and hate our partners because that's the way it's supposed to be, guys!

I completely admit that I am so, so guilty of falling into this mindset, whether it's because I've absorbed it through our culture or whether it's my own personal weird issue, but I definitely glorify being the exhausted, overworked mother. It's like I use my level of overwhelmedness as a way to measure myself as a mom. How tired am I today on a scale of one to 10? An 11? OK, must have been a good day in mommying!

I was struck by the smallest things on Fuller House, like how other people feed baby Tommy his bottle. Or the fact that DJ literally has a tribe of women surrounding her at all times, something that almost made me want to cry because that stable of support looks so amazing.

But honestly, that's crap; both for me, my kids, and my partner. There's no reward at the end of life or along the way for being the most miserable mother. There's no trophy you get for doing it all yourself. All you do is burn yourself out, make yourself sick, and wind up miserable and cranky. You're not helping anyone when you're doing it all because doing it all has always been and will always be a myth.

And by "doing it all," I'm talking about the daily minutiae of life: the fact that on any given day, I have to hold the baby while I go to the bathroom or put on my makeup; I have to make lunches while emailing clients back; that I feel this insane amount of pressure to cook organic foods even though my kids will not even touch them. I'm talking about the million, zillion small ways that I (and so many other women) do it all without even realizing that we already are.

I was struck by the smallest things on Fuller House, like how other people feed baby Tommy his bottle. Or the fact that D.J. literally has a tribe of women surrounding her at all times, something that almost made me want to cry because that stable of support looks so amazing. I was struck by how D.J.'s portrayed as a mom who is beautiful and professional and educated and loving, but still is supported by about five other grown adults at any given time during the show. I was even struck by how she gets to drink a cup of coffee sometimes in peace because someone else is holding her baby for her, which yes, maybe sounds crazy, but if you're a mom you get what I'm talking about here. And I was struck that in light of all this, we're not asked to feel sorry for her, to pity her, or to think less of her because she can't do it all on her own. Instead, I felt proud of D.J. Proud that she is a shining example of what motherhood in the modern age is: people helping you out, lifting you up, and reminding you that being a martyr isn't helping anyone.

When you're a mom, it's the littlest things that matter the most to you. Like someone watching your kids so you can drink a cup of coffee or a friend eating an entire cake with you, or a parent dropping by just to tell you're doing a great job. To see such an honest reflection of motherhood staring back at me from my TV screen in 2016 felt incredible. It felt like somebody finally understood that having it all and doing it all is not any less valuable when you have a support system behind you. It isn't any less real. There may be a lot of silly things about Fuller House, but I'll tell you the one thing the show gets right about motherhood: parenting is always a journey best made with help along the way.