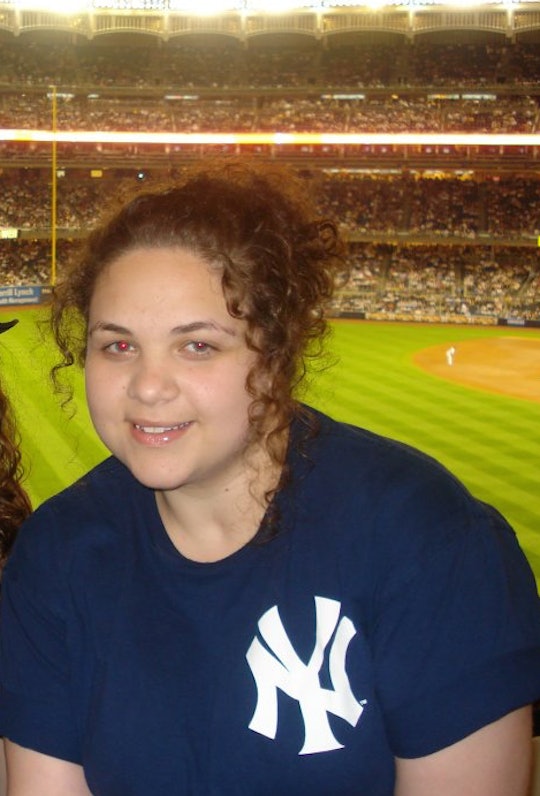 I never lived in downtown Brooklyn in my mid-20s (look, I’m rich in love, not rich in actual dollars), but I did find a home away from home there. It was in the luxurious, lovely Brooklyn Heights that I sat for twin 5-month-old baby girls. Their parents were a successful couple who were also warm and generous and smart and friendly and funny and treated me like family the minute I walked in the door. The mother, a lawyer, greeted me with a hug and a smile at the door. The father, a writer, joked that we’d get along just fine because I was wearing a Yankees sweatshirt. For the first time in months, I felt at ease. Looking back, it's the one thing I want the family I nannied for to know: they were my home away from home.

As anyone who lives in, or has lived in, New York City will tell you it can be an extremely lonely place. Yes, there are a million things to do and millions of people (roughly 8.5 of them) creating its vibrant, frantic energy, but it can often feel like a terribly isolating little island, too. When you’re young and broke like I was, those millions of exciting things can seem like nothing more than a daydream. And those 8.5 million people you could meet at any moment? Well, they wish you’d walk a little faster down the subway steps.

Being a part of their lives remains one of the greatest things that happened to me while I was in New York.

I didn’t take on babysitting jobs to not only feel less lonely and feel like part of a family, but that’s exactly what happened with one family in particular. Since I had the great pleasure of graduating into the working world riiiiight as the economy fell to pieces in 2008, having one job to stay afloat was out of the question. I pursued my dreams of having a career in journalism and sunk my teeth into the Big Apple with a high-profile internship. It was a fantastic, once-in-a-lifetime experience that also paid $10 an hour. It wasn’t quite cutting it.

As fate would have it, I worked closely with an editor who also happened to be the mom to two adorable, 1-year-old twins. As we looked at pictures of her giggling, bouncy twins, I mentioned that I’d been babysitting since I was about 12. I talked openly about how much I loved my best friend’s two young kids, and how much I love kids in general. While I have no desire to have my own, I’ve always enjoyed spending time with them, and watching those close to me grow up into incredible people. This was music to my editor’s ears. She asked if I wanted to watch her kids. I was flattered and excited at the opportunity.

I’d never watched twins before, but when it was for two babies as well-behaved and sweet as these two, it wasn’t double the anxiety, it was more like double the joy. She was so happy with how things went that she asked if I’d be interested in being put as a recommended babysitter on a Manhattan mailing list for parents of twins. I said of course. Not only because I remembered how much I enjoyed being a caretaker for kids, but two kids also meant more pay. When you’re 24 years old and trying to keep your head above water in the Greatest City in the World, you’ll babysit octuplets if it means you’ll be able to pay your rent and have dinner that week.

There was something special about this family, and the fact that they were inviting me into their home, to be part of their lives, to help take care of their wonderful kids, was better than any night at a bar.

My editor must have written a glowing post, because the requests came in fast and furious. I took on as many gigs as I could on nights and weekends, from families living in ritzy Manhattan high-rises to humble hippies out in the depths of Queens. Sometimes I’d sit for these families once or twice, always doing my job, but never feeling like I wasn’t a stranger in someone’s home.

However, all that changed when I met one family in particular from Brooklyn. They had two gorgeous, blue-eyed babies who weren’t identical, but they were tough to tell apart. I adored them from the minute I met them. After sitting for them one random Saturday night, they invited me to have a standing schedule with them: every Saturday I’d come by, whether it was to give them an extra hand with the girls throughout the day, or put them to bed at night so they could grab dinner or see a movie. I could see how some people my age would have scoffed at the idea of “losing” their Saturdays, but I jumped at the opportunity. There was something special about this family, and the fact that they were inviting me into their home, to be part of their lives, to help take care of their wonderful kids, was better than any night at a bar.

I knew that I would be properly fed and that I wouldn’t have to take the subway home after midnight, as they always called me a car. I knew that I would feel more like a big sister and less like a babysitter to these girls who were growing stronger and sweeter and funnier by the day.

I loved those Saturdays. Not only because the girls were such delights to watch, but because it felt like a home away from home. The mother was smart and beautiful and successful, and encouraged and supported me, whether I was telling her about an article I was currently working on, or a boy I was thinking about dating. The father was funny and easygoing and we talked movies and shared a love of Diet Coke. I told those baby girls everyday how lucky they were to have such awesome parents. They usually just gurgled and then averted their attention back to Yo Gabba Gabba.

New York can be a lonely, terrifying place. My diet maintained mostly of mac and cheese, or whatever I could nab from my internship’s cafeteria. I had a few friends, but everyone else was just as lonely and terrified and trying to figure out what they were doing. I took the subway late at night when I definitely should have taken cabs. I was scraping by most months and it was a constant struggle between feeling like I was following my dreams, and keeping my utter, crushing homesickness at bay.

I was invited to birthday parties and outings at country clubs and for family walks along the Brooklyn Heights Promenade and field trips to museums. We talked openly about our own lives and our families and I felt accepted and happy and at home.

Maybe it was because the parents of the girls I was nannying for, in a way, reminded me of my own parents, or maybe because the girls were so much fun to be around, but whatever it was, I felt less lonely and scared about the future when we were all together. I knew they would be happy to see me, and when you live in NYC, strangers scowling at you can become part of your routine. I knew that I would be properly fed and that I wouldn’t have to take the subway home after midnight, as they always called me a car. I knew that I would feel more like a big sister and less like a babysitter to these girls who were growing stronger and sweeter and funnier by the day. I loved teaching them new things and listening to them pick up on certain things. (One day when they were getting ready for their nap, I told them it was time to “get comfy cozy.” The next time I saw them, one of the twins told me it was time to “get comfy cozy.” My heart melted.)

I was invited to birthday parties and outings at country clubs and for family walks along the Brooklyn Heights Promenade and field trips to museums. We talked openly about our own lives and our families and I felt accepted and happy and at home. And let me tell you, as a newcomer to NYC, that’s an incredibly rare feeling. Eventually the family had another baby girl and I had the honor of watching her, too. (Yes, three baby girls under one roof, which is the loveliest kind of chaos.)

I watched the girls for over three years until a personal tragedy brought me back home to Philadelphia and, thus, in and out of New York City for some time. I've managed to keep in sporadic touch with them since I left, and being a part of their lives remains one of the greatest things that happened to me while I was in New York. Sure, it was a great “gig” that paid well, but it was so much more than that. I became part of a family when I was away from my own. When I was with them I felt safe and appreciated and that someone was always looking out for me, even though I was hired to look out for their three little baby girls.

This generous family and their warm, lovely home became my own sanctuary. A place that made the pressures and fears of living in a wonderfully messy city fade away, even if only for a few hours. The love was strong in their household, and I was so grateful to be part of it. It’s a lucky thing to be invited into a family to take care of their precious children, it’s another thing entirely when you are invited to be part of it. I don’t miss the hustle of New York, but I do miss that family and everything they gave me during that time of my life.

More Like This
Tips to Beat Jet Lag, For You & Your Kids
The Best Travel Tips For Solo Parenting
40 Valentine's Day Outfits Your Girls Will Adore Showing Off This Season
These 72 Instagram Captions Are Perfect For Your Snow Day Pics
What Parents Are Talking About — Delivered Straight To Your Inbox