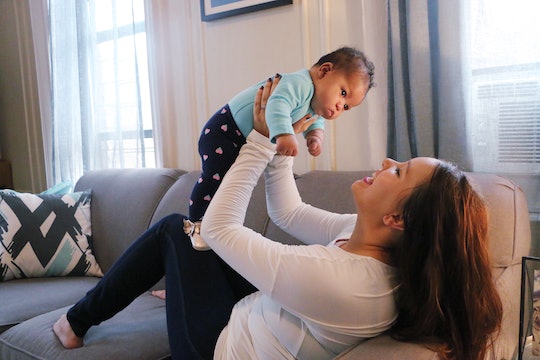 The 1 Thing I Wouldn't Sacrifice During My Labor

During my second pregnancy, I became obsessed with having a medication-free delivery. The word "obsessed" is often overused, but in this case, it's true: I was absolutely unwilling to consider anything but a medication-free birth, and it’s pretty much all I talked about to anyone who would listen for nine months and beyond. I was certain I wanted to have an unmedicated birth and even though I questioned myself once labor began, I'm glad I stuck to my convictions.

Why was I so insistent upon an unmedicated delivery? Like many, I watched The Business of Being Born documentary because it caused such a media frenzy that I needed to check it out for myself. It more than got my attention. It shook me to my core. It opened my eyes and left tons of lingering questions: Is delivering a baby is truly a business? Are hospitals doing everything they can to keep the money coming in, sometimes despite the mother’s wishes? While yes, those were pretty dramatic claims, what stood out to me most was the doctor's talk about the "love cocktail" — his term for the hormones oxytocin, progesterone, and oestrogen — released after a baby is born that bonds mother and baby, and I don't think I had that amazing moment during my first pregnancy because I was so numb.

This led me to the Internet, where I scoured endless article that eventually helped me form my strong opinion that I did indeed want to have a med-free delivery. I needed to experience what that was like. I had a yearning inside to feel what it was like to bring my daughter into the world — I didn't want any harmful chemicals pulsing through me that could negatively impact her later on in life. I wanted to give birth on my terms and without interventions, unless it was an emergency.

I laughed and cried all at the same time while delivering our little man, and I felt a bit out of control, almost drunk from the medications. Loopy, strong highs and lows — this was how the Pitocin made me feel and I didn't like it one bit. So I promised myself that I would have a different birthing experience if I ever had another baby.

And no, before you try to call me out, I’m not one of those judge-y women who look down on anyone who had an epidural. In fact, I had one with my first pregnancy. Eight years ago, when I was delivering my son, I had all the drugs. I even delivered in a hospital in my hometown that was nicknamed “the baby factory” because they're quick to get that Pitocin drip going as soon as you're admitted to move things along. I laughed and cried all at the same time while delivering our little man, and I felt a bit out of control, almost drunk from the medications. Loopy, strong highs and lows — this was how the Pitocin made me feel and I didn't like it one bit. So I promised myself that I would have a different birthing experience if I ever had another baby.

Of course, everyone in my life had their own opinion of what I was about to experience in that delivery room. My husband went along with it all and supported my decision fully. From most people though, I got a lot of, "wow, you're so brave!" and, "I could never do that!" Some vocalized concern — "what if there is an emergency?" — to which I constantly assured them that if there was one (though I am perfectly healthy and there weren't any predicted complications) I'd be fine with interventions in that case.

I went straight to triage, where they immediately began giving me fluids to replace everything I'd lost when the most unexpected thing came flying out of my mouth.

So, almost five month ago now, I went into labor with my daughter, and as soon as my water broke and those strong contractions started, I knew it was the most painful thing I'd ever experienced in my life. But I was expecting that. Our New York City apartment was just four blocks from the hospital I planned to deliver at and the whole time I was pregnant, I'd planned to walk there. It might sound crazy, but I thought I could do it and no way was I paying for a cab to go such a quick distance. When the night came, I went into labor at 7:30 p.m., starting with light, manageable contractions. Then, something unexpected happened: I had major vomiting and diarrhea after going into labor (something I didn’t even know would happen, since my first pregnancy I was hooked up to machines so quick and did not labor at home at all). This can happen "because of the pain you're experiencing or as a result of food sitting in your stomach (digestion usually stops during labor)," according to Parenting.com.

I wasn’t prepared for this, and it made me so sick and lethargic that I couldn’t even stand. So we ended up having to call an ambulance to go those four stupid blocks and get my pregnant ass to the delivery floor.

I was the only one there to deliver at 3 a.m. that morning, so I was able to scream without scaring the sh*t out of anyone else. I did just that and shrieked, feeling the pain pulse through my body. I went straight to triage, where they immediately began giving me fluids to replace everything I'd lost when the most unexpected thing came flying out of my mouth.

“OK, honey, as soon as we get you all checked in, we’ll place that order for you," the nurse replied.

Did she not hear me correctly? I needed it right then and there because my body wasn’t able to handle the pain any longer. Not one more second. This baby wouldn’t be born without those drugs, even though this was the one thing I thought I wasn’t willing to budge on.

But as soon as those words left my lips, I realized I was shaking and twisting and kicking so much in that hospital bed that there would be no way for a doctor to put that needle in my back. They didn't tell me that I couldn't have the epidural at that point — I'd been told I was 5 centimeters dilated even though I suspect I was actually further along — but reality washed over me and one thing became very clear: I was going to have to deliver this baby if I wanted this extreme pain to stop.

I was then wheeled into the hallway heading towards my delivery room and that’s when the urge to push began. In that short period of time when I was laying in triage, I went from 5 centimeters dilated to ready to push. Only 10 painful minutes later, the pain ceased and our beautiful little girl entered the world. Though it felt like I'd been pushing for an eternity, I hadn't. She was here in my arms, skin-to-skin, and I had somehow pushed through the med-free delivery I was so focused on having to begin with.

Thinking back on that day, I'm often asked if I would do it the same way if we had another child. I'm confident that I could do it, but not sure if having a drug-free delivery was worth the pain. I know that this is what our bodies are made to do and women are strong and can handle it, but it's a lot of pain to put yourself through. Plus, there's nothing wrong with having medical interventions in your labor. It's your body. Do what you want with it. For me, in retrospect, I'm so happy I got to have that experience, because it was exactly what I wanted. If I have another child in the future, I'd probably say yes to getting the epidural and no to any other drugs that would speed up the delivery. I still want the chance to let me body do its thing.