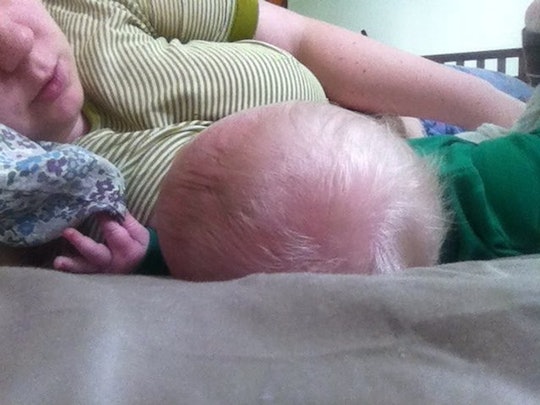 The One Thing I Won't Ever Do While Breastfeeding In Public

I’ve been breastfeeding my baby for what feels like my entire life now, and in general I’ve actually had pretty good luck with breastfeeding in public. I’ve never been asked to cover up, never got any rude comments at all, and have very rarely even had someone look at me funny. Maybe it’s the area that I live in, maybe it’s the types of establishments I frequent, or maybe it’s just dumb luck, but whatever it is, I like it. I’m so used to public breastfeeding being no big deal, though, that I find myself in total shock when people suddenly care. Recently, and one of the few times this has come up in my life, someone suggested that if I wanted to avoid negative attention while feeding my kid in public, I could just use a breastfeeding cover. I don’t have a problem with breastfeeding covers in general, and I realize that they make some nursing parents feel more comfortable while nursing on the go, and I’m all for that, but personally there's one thing I won't ever do while breastfeeding in public: I won't ever use a breastfeeding cover. I tried it once, and that, for me, was enough. And I don't feel bad about it.

Contrary to what many people seem to believe, I find that attempting to cover up just makes breastfeeding harder for the two people who matter most: the nursing parent and the baby. Once upon a time, against my better judgment, I did attempt a sort of makeshift cover while nursing my baby. The circumstances were not great, I was waiting for six hours in a crowded ER, and I was seriously worried that pulling my breast out would make someone uncomfortable. So I attempted to nurse him while hiding my scandalous boob behind ones of those ultra-light muslin swaddling blankets. It was a total disaster. I was miserable, but more importantly my baby was miserable, and I realized that it just wasn’t fair to put that on him.

Though a specifically designed cover would likely be easier to navigate, the biggest issues I had with covering up to feed my son were far more than simply the blanket falling down or being awkward to position. Plain and simple, breastfeeding babies get warm, and covered breastfeeding babies get hot. When I breastfeed my baby, he’s right up against one of the warmest parts of my body, and he’s eating. If I nurse in a traditional cross-cradle position, the baby’s belly is also right up against my belly. All that body heat has to go somewhere, but even the lightest of covers can trap it in, and that leaves me with one sweaty, slippery baby. So when I did cover up, I was amazed to sneak a peek at my nursing newborn and find him completely drenched in sweat. As a mother, I felt horrible for letting him risk overheating, just to avoid risking offending someone with my scandalous breasts.

When I did try to cover up, it wasn’t about making me more comfortable, it was about trying to appease other people.

Another issue is positioning. With young babies, latching them on isn’t always a walk in the park. And if my baby needed a little guidance latching on, or I needed to fiddle with the positioning to get us both comfortable, any kind of coverage would just make it impossible for me to see what I was doing. Improper latch can affect how much milk the baby gets and be utter hell for the breastfeeding parent, leading to chafing and all sorts of nastiness.

And now that my baby is bigger and able to latch on pretty easily, I still can’t imagine how breastfeeding with a cover would even work. I can’t even wear a light scarf around my neck during a breastfeeding session because he’ll grab it and pull it every which way. So what would stop him from just removing the stuffy uncomfortable cover? Probably nothing. It would just leave both of us frustrated and unhappy, rather than allowing us to enjoy a nice relaxing breastfeeding session like we want to.

I don’t shame or belittle anyone for wanting to cover up while breastfeeding. And I definitely don’t want to guilt them for enjoying the coverage a cover provides. But personally, I realized that when I did try to cover up, it wasn’t about making me more comfortable, it was about trying to appease other people. I feel really strongly that all parents, no matter who they are, constantly have to decide which things to prioritize in our lives. Ultimately, I decided that my baby’s comfort, as well as my own, had to be more important to me than other people’s delicate sensibilities. So far, it's worked out for us both just fine.