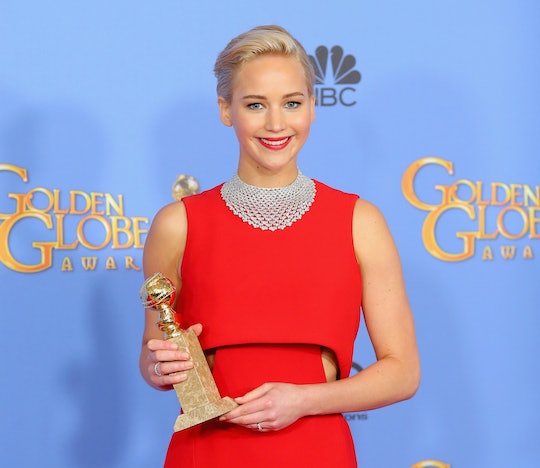 You know how the saying goes: After the party, there's the after party. And that's where we're at now. Jennifer Lawrence stopped by E!'s Globes After Party show and spoke with host Maria Menounos about her win. But before J. Law makes her way to the hotel lobby (it follows the after party, duh), we should talk about what the Golden Globes winner said live on air. Was Lawrence funny? Obviously. Relatable? Of course! A little disappointingly body negative? Unfortunately.

The actress, who took home the trophy for her role in Joy, was watching the playback of herself walking up to the stage to accept the Globe when she said to Menounos, "God, I have such a man back." She then went on to call out her pimples. This, mind you, was after some back and forth with Menounos about Bud Light. Naturally, Lawrence was thrilled with the beer and said she recognized what brand it was, even though it was hidden in a koozie, by its screw top.

She is all of us.

And the comment about her back is all of us, too. Same with the "you can see my pimples, I just checked the screen," which was followed it up with an eye roll: "I have zits too, OK?"

All of it is OK. It's more than OK. It's just too bad, it's really too bad, that our trained female instinct, no matter if we're one of the most beautiful, most beloved people in the world, is to draw attention to our flaws. To make sure that we're seen as humble, or worse off than you, no matter if you're a complete stranger, a friend, or a partner. You're better. We're nothing.

Here Lawrence is, watching herself accept one of the most prestigious awards in her field, and she's pointing out that she has a "man back" and pimples.

We've applauded Lawrence for years for how real she is — she was called "real" during this interview with Menounos countless times — because she is different from the veiled versions of so many actors. She speaks her mind. She's achingly funny. She watches Bravo, she kicked ass in a female-led hero franchise, and she talks a lot about pizza.

And Lawrence's realness has meant great things for women, like when she wrote her essay about the gender pay-gap. In it, she acknowledged a very real truth: sometimes women are afraid to ask for more because we don't want to be seen as "difficult."

In the essay, Lawrence says she didn't need the extra millions of dollars her male co-stars were getting and decided not to go after the money, not because she already had enough, but because she didn't want to make anyone angry.

And here we are with the "I have such a man back" comment and the zits thing. That's real. That's how she felt. We like her realness, we need her realness, and her realness has been helpful, but this comment, as painfully relatable as it is, might be something we could use less of from Lawrence, from our female friends, and from ourselves.

Lawrence's friend Amy Schumer's skit "Compliments" went viral because it highlighted the fact that women put ourselves down when faced with a compliment. The skit is as hilarious as it is bitingly sad.

Lawrence doesn't have a "man back." She may have pimples, but no one noticed. She's one of the most successful women on planet Earth. She doesn't have to apologize for doing something great by pointing out a perceived flaw.

She doesn't owe it to anyone but herself to try to stop the self-negging habit that's so familiar to so many of us. There are always going to be other people trying to bring us down; no need to add to their noise.

Because, yeah, f*ck that.

More Like This
Why Babies Love Water, According To Experts
Why It's Crucial to Get Good Sleep As A New Mom — Plus, Tips On How To Do It
Everything You Need To Know About Colostrum Harvesting
Barack & Michelle Obama Shared The Most Adorable Baby Photos Of Malia On Her Birthday