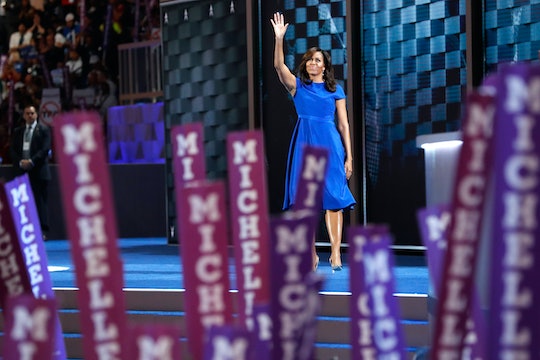 Last night the Democratic National Convention opened in Philadelphia and many of the party's most respected members took to the stage in support of Hillary Clinton — First Lady Michelle Obama among them, giving a speech that brought the house down. The evening had gotten off to a somewhat tense start, though. Throngs of Bernie Sanders supporters booed very mention of Clinton's name and, at times, drowned out the speakers. Sanders actually sent a text message to his supporters imploring them to tone it down and urged them to unite in support of Clinton.

It was Michelle Obama's speech, however, that really elevated the tone of the night. The First Lady's opening remarks highlighted, first and foremost, her family and began with her memories of sending daughters Sasha and Malia off to school for the first time — burly, gun-packing secret service agents in tow. When their father became president, the girls were just 7 and 10 years old.

"I realized that our time in the White House would form the foundation for who they would become, and how well we managed this experience could truly make or break them."

The First Lady spoke of how, over the last two terms of the presidency, the girls have come of age under a unique — and at times blinding — spotlight. Every single time their father's citizenship was questioned, or he was maligned by the press, or he had to address yet another shooting, the girls saw and heard everything. Social media, too, has made it even harder to shelter any young person — not just the president's teenage daughters — from the hatred, bigotry, and sexism that plagues our world (and the 2016 election, unfortunately). But Michelle Obama has long been determined to make sure that her girls — that all girls, everywhere — understand that this hatred does not, and should not, define America.

"We explain that when someone is cruel, or acts like a bully, you don’t stoop to their level — no, our motto is, when they go low, we go high."

Parents have always had the responsibility to help their children interpret the world around them, but what Obama has reminded people of is that the actions of any adult in a child's life will always speak louder than their words. What is demonstrated, what a child observes — and it's a lot more than we think, and at younger ages than we realize — is what will most inform a child's view.

In her speech, Michelle Obama reminded parents that it goes both ways: they can set good examples and bad examples. No parent, no adult, is perfect. Sometimes parents tell their children, "do as I say, not as I do." But how children view the world, how they relate to it, is something much bigger than each individual choice their parents' make. It's about how parents behave over time as their children are growing up.

"I watch my daughters — two beautiful, intelligent, black young women — playing with their dogs on the White House lawn. And because of Hillary Clinton, my daughters — and all our sons and daughters — now take for granted that a woman can be President of the United States."

Hillary Clinton's campaign released a powerful ad last week that showed American children watching Republican nominee Donald J. Trump speak. The children in the ad did nothing but watch and listen as Trump said things like, "I could stand in the middle of 5th Avenue and shoot somebody and I wouldn't lose any voters," and clips from various speaking engagements where he has been unapologetically racist, homophobic, and sexist.

Trump has not even been elected president, but just by being in the race he has already exposed all of us to vitriol that certainly won't "Make America Great Again."

And if he does win? How could any parent look at their child and tell them not to be a bully when that's what the leader of their country is? How could any child of color growing up in America feel that they are safe and deserving of the opportunities this nation affords when their president believes that they are fundamentally less than?

How could any young girl growing up in America during a Trump presidency believe that she had value outside of her appearance, or that she has agency over her own body, when the leader of her country sexually aggrandizes women while at the same time, blames them for sexual violence?

In her speech, Obama reminded all of us that America is a country that was built on a foundation of courage and unity in the face of the many egomaniacal powers that have tried to divide us.

"That is the story of this country, the story that has brought me to this stage tonight, the story of generations of people who felt the lash of bondage, the shame of servitude, the sting of segregation, but who kept on striving and hoping and doing what needed to be done so that today, I wake up every morning in a house that was built by slaves."

In her speech, the First Lady spoke passionately about her family, America, and our responsibilities to the next generation of Americans — and in doing so, she gave adults a powerful example to start with when they interact with young people throughout the remainder of the election year, and during the presidency to come: Obama showed us the weakness and danger of Trump's rhetoric without slinging a single insult his way, because that is the kind of example that real adults set for the next generation.