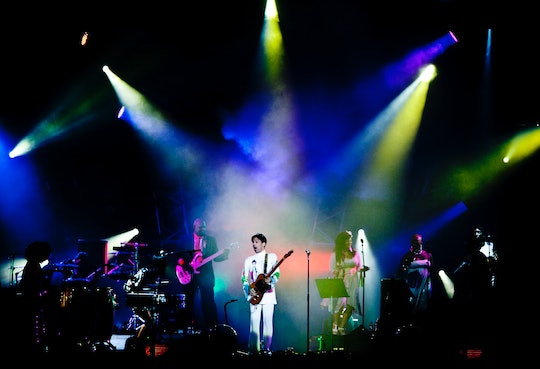 I spent the beginning of my Thursday morning blissfully unaware that I'd be paralyzed by the sudden and unexpected news that music icon, legend, and pioneer Prince died at 57 years old. After the loss of Bowie, and so many other quintessential artists, 2016 seems hellbent on breaking us all in the worst way possible: by taking away those who've helped us all keep it together. But today, Prince's untimely death cuts deep. He, and his music, were there for me in ways I'll never be able to pay back. And now that he's gone, I'll never be able to properly thank him.

I spent the majority of my toxic childhood listening to Prince. My abusive father was an avid fan. He collected every CD ever released or re-released or digitally re-mastered, and would insist on turning up our over-priced speakers when any one of his many hit singles were on the radio. Purple Rain — both the album and the movie — provided colorful background music to an otherwise dark and painful adolescence. My father put multiple holes in the wall of our home's entryway while "Let's Go Crazy" played in the background; he threatened my mother in our kitchen as the words to "When Doves Cry" struggled to drown him out; he called me names and pushed me to the floor of our living room, "Little Red Corvette" failing to catch me.

I'd watch his HBO specials and his music videos, staring and marveling and utterly transfixed at this androgynous, unapologetically sexual, seemingly other-worldly man, entirely confused as to why the only man in my life — my abusive father — was a huge fan of such a sensual, soft-spoken, and kind artist.

The only man in my life hit me and screamed at me and hurt my mother regularly, but on television or through a stereo, I listened to the falsetto voice of a gender-bending artist who didn't care if he was viewed as powerful or scary or in control; he just cared about making the world better.

The death of Prince feels like the death of a part of my father I never knew; a part I hoped he had underneath all the anger and manipulation and violence. I held onto Prince's music, to his movements, to his subtle gazes and his sexual charisma as a reminder that not all men were like my father, and a hope that eventually, my father wouldn't be like himself either. The obvious differences between a man who was hellbent on expressing his strength through physical violence and a man who expressed his strength through unapologetic, arguably "feminine" attributes was not lost on me. The only man in my life hit me and screamed at me and hurt my mother regularly, but on television or through a stereo, I listened to the falsetto voice of a gender-bending artist who didn't care if he was viewed as powerful or scary or in control or any other stereotype our society convinces men they should embody; he just cared about making the world better, making music and, I'm convinced, helping people get off. The man I knew taught me hate, but the man I never met — the man who loved purple — taught me love.

The man I grew up with told me that I was worthless, useless, and incapable of making something of myself. A man I never met, however, taught me that you can redefine yourself in a million ways, a million times; transforming yourself into whoever — even whatever — you want to be, at your own creative and artistic discretion. The man I grew up taught me that women are powerless to control their own lives, their own destinies, and even their own bodies. Yet a man I'd never met showed me that I didn't always have to be the scared girl from an abusive home; one day, I could be the confidant woman who ended a cycle of violence and refused to become everything her toxic father promised her she would be. Prince once said, "There were so many different ways to be beautiful," so I knew there were so many different ways I could put a painful past behind me and give myself the love and support I deserved.

I find myself learning to let go of a man who couldn’t be what I needed, and holding that much tighter to two men who are exactly what I want and need and deserve.

Which is why, as I say goodbye to the man who subtly and often sensually whispered a promise that not all men are the same, I also celebrate that promise, and the fact that I've learned it's undeniably true. I watch my partner dance with our almost 2-year-old son to “Let’s Go Crazy” and “When Doves Cry” and “Little Red Corvette,” and I know that the dream I once had when I listened to Prince as a little girl has come true. I hoped I wouldn't be afraid or in pain. And I'm not. When Prince comes on, it's not to cover up the sounds of screams or the throw of a punch into a wall. Instead, there’s laughter and dancing and joy.

Just as Prince left this world, I find myself learning to let go of a man who couldn’t be what I needed, and holding that much tighter to two men who are exactly what I want and need and deserve. For my son, Prince will be nothing more than a timeless artist who made his father and mother move awkwardly together and, in turn, made him belly laugh until his cheeks hurt. That’s the Prince I want to know. And luckily, that's the Prince I get to know now.

So sure, Prince gave us 39 studio albums and countless hit singles. And yes, I will always roll my windows down — regardless of the weather — and come dangerously close to destroying my vehicle's speakers anytime "Kiss" or "Cream" or "Why You Wanna Treat Me So Bad" are played; dancing with reckless abandon and little self-consciousness and until it seriously threatens to impair my driving. But what Prince gave us — gave me — that makes his exit from this world so painful, was hope. Hope that it really does get better. Hope that you can redefine yourself and your future. Hope that what we've endured will not dictate our chances at potential happiness.

And that hope is why today I'll sit on my couch with Purple Rain on repeat and know that I'll never be alone. Prince may have left me (and us all) for another world and another stage, but when I listen to his music, I'll always feel seen and heard and found. I'll always have hope.