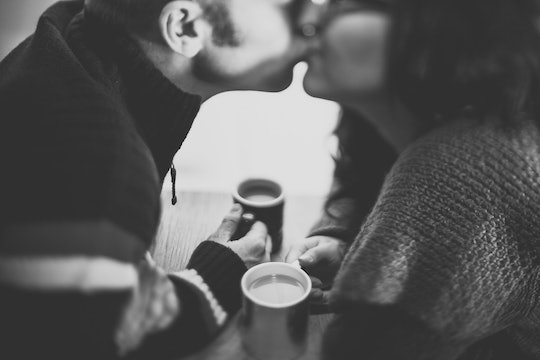 I’ve been with my partner for 12 years. He’s a white cisgender man. I’m a white cisgender woman. We’re monogamous. We’re married. We’re so very typical and privileged. I’m very happy in our partnership and I wouldn’t change a thing, but a few years into our relationship, when I became more aware of the vast range of sexuality and gender, I started to question my own identity and place on the spectrum. And although my partner and I talk about everything, this was a topic that was so fraught, we’ve rarely talked about it since I brought it up earlier this year.

When we met, we were both in college. I’d never had a romantic or sexual relationship before. Aside from a few kisses and many crushes, I was completely inexperienced. I never thought I was anything other than straight. Most of my crushes were on men. The only thing that maybe felt a little different about me was that I seemed to skip the phase where I would squeal over how hot celebrities were. I still remember being in fifth or sixth grade and all the girls in my class passing around a magazine cover featuring a shirtless and long-haired Brad Pitt. Some of my friends would blush, others would stare, but most of them made a big show of fanning themselves. I seriously did not get the big deal. I thought it was because I was a late bloomer. I didn’t start puberty until almost high school.

Eventually I developed crushes and felt a little more like my peers. I always felt a little bashful around my older brother’s friends as well. But mostly I liked celebrities with nice eyes and nice smiles and beautiful voices. I wasn’t drawn to hyper-masculine men. When I met my partner, my crush on him was instantaneous. We weren’t friends first. We went right from meeting each other to flirting, to dating, to falling in love. And that was that.

I've always found him attractive. Always. But it isn’t the kind of attraction that makes me want to rip his clothes off and jump him. In fact, I’ve never really felt that kind of attraction to anyone. The times in my life when I’ve ever felt “horny” I could count on one hand. It just isn’t an important part of my experience. But that wasn’t ever an issue for us. I just liked being with him. I still find sex pleasurable (even though it was always more difficult for me to become aroused or achieve orgasm). I love the closeness of it and the physical sensations and the warmth. And I love him.

As the years went on and we got married and started having kids, things slowed down in our sex life. I was very reassured when I read in dozens of magazines and online communities that it was normal. And it really didn’t bother me. I knew he missed sex, so we still made time for it, even if it was much less frequently than before. But things had shifted. I really did not enjoy kissing. At all. I wanted our sessions to be quick, because I so rarely got anything out of it. And, yeah, I was definitely suffering from a good bit of sexual dysfunction from taking anti-depressants and from breastfeeding, so I chalked up all my disinterest to that. Why bother with the (very time-consuming) process of trying to get me aroused if I couldn’t orgasm?

I turned to him and said: “I hope you know that if you ever decided you were trans or identified a different way, I would still love you exactly the same.” I expected him to say: “me too,” but he didn’t.

Around the same time, I became an ally to the LGBTQA+ community. I try to learn and understand the experiences of people with different experiences from mine. That’s when I learned about asexuality, which is the absence of sexual attraction. I learned that it was a spectrum — the presence of sexual attraction isn’t an all or nothing thing for some people. And I started to wonder if I fell somewhere along that line between sexual person and completely disinterested person. There’s a difference between sexual feelings and romantic ones. I definitely have a lot of romantic feelings. But I was starting to realize that sex was just not as important to me as a lot of people. And that the attraction I felt to people was more romantic than sexual.

Plotting out my coordinates on a spectrum aren’t going to change how I feel about my husband. But there’s also nothing wrong with wanting a label. In fact, when I heard terms like “panromantic” and “demisexual” I felt a great relief. Panromantic means that any romantic attraction the individual experiences isn’t based on gender or biological sex. And demisexual means that there can be some sexual attraction or desire to have sex, but it generally goes along with a deep emotional relationship. Knowing these terms, and that I identify with them, is important to me as an individual.

I started to tell him how I was maybe discovering that I was not as sexual as he was, or maybe as much as most people, and how I was OK with that. He was not OK with it — in fact, he so upset that he almost cried. To him, it was like I was saying our whole relationship had been a lie. That every time we had sex, I was just putting up with him.

I didn’t know if it was important to broach the subject with my partner. Mostly I wanted him to know that any lack of interest (or the fact that my interest in sex was not as intense as his) had nothing at all to do with my love for him. I wanted him to know that while I might not have the I-want-to-throw-you-down-and-ravage-you urges, it didn’t mean anything bad. But the issue came up when we were watching TV. I think it was Orange is the New Black or it might have been Transparent. There was a trans storyline, and I turned to him and said: “I hope you know that if you ever decided you were trans or identified a different way, I would still love you exactly the same.”

I expected him to say: “me too,” but he didn’t. He couldn’t believe I felt that way. I told him that the fact that he was a man didn’t have a lot to do with how I felt about him. And that’s another facet of my sexuality that’s different from his. Yeah, most of my romantic feelings are toward men, but I find woman and some trans people and queer or non-binary people attractive as well. The most attractive people to me are people who are unapologetically themselves. And my partner fits that bill. He’s a really sensitive guy who is artistic and thoughtful. He’s not the poster boy for masculinity, even though he is muscled and handsome. Gender is just not that important to me. I said as much to my partner, and he was shocked.

He finds me physically, sexually attractive as I am, as a cisgender woman. And he can’t imagine being sexually attracted to anybody else like he would be to a straight cisgender woman. So, I learned, there is no what-if scenario for him. He knows exactly what he likes and wants. And I started to tell him how I was maybe discovering that I was not as sexual as he was, or maybe as much as most people, and how I was OK with that. He was not OK with it — in fact, he so upset that he almost cried. To him, it was like I was saying our whole relationship had been a lie. That every time we had sex, I was just putting up with him.

I can understand why he’d be upset by this. If he told me he didn’t find me sexually attractive (which isn’t exactly what I said to him, though that’s certainly what he heard), I’d be hurt too.

After that conversation, I had to clarify so many things. I wanted to make sure he heard the positives about how much I loved him and truly enjoyed our intimacy. I did a lot of reassuring. Though sex wasn’t something I never really sought out, I enjoy sex with him, and I certainly like that he finds me attractive and that I can please him and be intimate with him. I wanted him to know that.

The bottom line is that he’s my partner, and I want him in my life and to be close to him and to share everything with him.

I’ve also sort of let go of the need to label myself. I’m a mostly-straight, somewhat-sexual woman who loves my partner. I don’t love him because of a six-pack or a penis. I love him because of who he is. It hasn’t even really changed our sex life. I’m sure he’d like to be intimate more often than we are, but that’s no different than it was before.

We haven’t discussed it much since that one time, but I think he knows that my sexuality is more fluid than his. Ideally I’d like for him to love me even if I decided I wanted to play with gender. I don’t see myself as anything but a cis-woman, but I never knew how dependent his attraction to me was on my gender identity. Since I put so much less emphasis on sex and gender, I was honestly a little surprised that he put so much more emphasis on it. But I have to respect that his desires and attractions are different from mine.

The bottom line is that he’s my partner, and I want him in my life and to be close to him and to share everything with him. I don’t see any new self-discoveries as any cause for our relationship to change. And nothing really has changed. I don’t feel as if I’m hiding a part of myself, but I don’t feel the need to discuss this over and over with him. If anything is different, it’s that our conversations have shifted to putting the emphasis on what we want from each other and what we can give each other. It really is a partnership. We still have sex. I still love being close to him, and find sexual pleasure when we’re together. I wouldn’t change a thing. If you asked him, he’d probably say that, yeah, he’d like it if once I laid eyes on him, I felt the need to jump him and tear off his clothes, but that’s never been our reality. It’s about love and family for me, so much more than it is all of the other stuff.