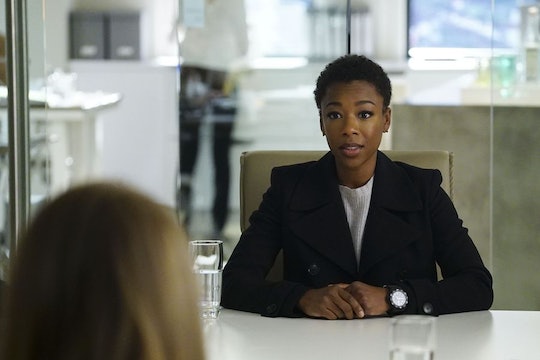 The One Thing 'The Catch' Got Right About Women In Charge

If you're a fan of Shondaland, strong female characters aren't something new to you. So, when Shonda Rhimes premiered her new series, it was no surprise that The Catch was full of women who kick ass and take names. On Thursday's episode, guest star Samira Wiley — or Poussey if you watch Orange is the New Black — played Nia, a soldier that was the first woman to become a Ranger. Unfortunately, because she was the first woman to hold such an important title, she began to receive death threats, warning her to leave her new position. Not willing to back down, she went to Alice & Co. for help. After many false leads, and a cute little flirtationship between Nia and Danny, it was discovered that the perpetrators behind the harassment were actually Nia's friend, Captain Todd, and her brother, Brian.

When asked why he did it, Brian explained that Nia didn't have any friends amongst the Rangers. Most of those men hated that she had become a Ranger and they wouldn't have her back out in the field, an unfortunate side effect of men who aren't quite ready to realize the equal potential awesome badass women have when reporting for duty. (For example, real life Army Ranger graduate, Capt. Kristen M. Griest, who became the first woman named as an infantry officer after graduating from the Army's Ranger School.)

Brian seemed to be coming from a place of protection, telling Nia that if she went and served, she would die, and he didn't want to see that happen to her. Nice. In other words, he threatened his sister and made her feel more unsafe in her own home in an effort to protect her.

After Brian then explained that he "respects" Nia and thinks she's the bravest woman he knows, he then pleaded with Nia to not go, and to instead serve in another branch of the Army. Nia seemed to consider the idea, but also mentioned how all she'd ever wanted to be was a Ranger, like her dad and brother, but that's when Alice finally cut in — "You are a Ranger," Alice said rather forcefully.

I'm so tired of hearing men say they're trying to protect us when what that does is take away our choices. This is your life, these are your choices to make but they're yours. Not his.

In one effortless swoop, Alice dealt with an issue that most women have dealt with at some point in their lives. Whether it was being told something was "too dangerous", or "too risky", or just for boys or, later in life, men. Women are more often told what they can't or shouldn't do instead of being encouraged to try anything — and that was clear in this scene. Brian's misogyny was thinly veiled behind concern for his sister, but it was evident that behind his pleas Brian was essentially telling Nia, "You can't."

He was saying, "You can't survive out there. You can't get these Rangers to support you. You can't change their minds. You can't do this." It wasn't until Alice spoke up, even though Brian didn't want her to, that Nia was reminded she could. And thus, Alice (a powerful woman in her own right) continued the awesome Shonda stream of women who encourage other women to take charge.