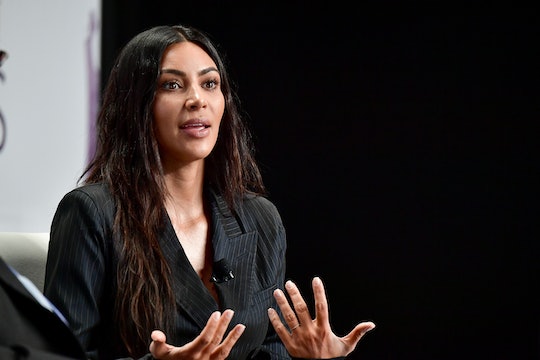 Who Cares Why Kim Kardashian West Has A Surrogate?

Today, multiple outlets reported that Kim Kardashian and husband Kanye West are reportedly using a surrogate to carry their next child, due to her medical issues while she was pregnant with her son Saint. On last season of Keeping Up With The Kardashians, Kardashian West discussed the possibility that she would use a surrogate to carry a third child, yet today, a "source" (presumably, a member of the well-oiled Kardashian West PR machine) confirmed it in an article in People. The internet responded in typical internet fashion: by shaming the crap out of her. The reactions ranged from mild bemusement over a wealthy woman having the means to pay a reported $113,000 for the privilege of having another person carry her child, to people accusing her of having faked previous medical issues as a smokescreen for her own vanity, so she could preserve her body.

Both of these groups of people seem to have forgotten two key facts: a) that being pregnant often sucks, and b) if you had the money to carry a child via a surrogate, and our culture didn't tell us you'd be a bad bad selfish selfish woman if you did, let's be real — you probably would, too.

Kardashian West has made no secret of the fact that she did not enjoy either of her two pregnancies. After she became pregnant with her second child Saint in 2015, she published a blog post saying, ""I'm gonna keep it real: For me, pregnancy is the worst experience of my life! LOL! I don't enjoy one moment of it and I don't understand people who enjoy it....Maybe it's the swelling, the backaches or just the complete mindf—k of how your body expands and nothing fits. I just always feel like I'm not in my own skin."

In our culture, there is a dominant belief that motherhood must be synonymous with total self-sacrifice — and Kim Kardashian West is directly challenging that.

At the time, media outlets applauded Kardashian West for her candor, and it's completely obvious why. Even if you're the type of pregnant person who walks around barefoot and poses nude for sexy maternity photoshoots and glows like you'd just come back from testing a bunch of highlighters at Sephora, pregnancy can be an incredibly disempowering experience: it's easy to feel like your body is not your own because it isn't, so much as it is a rapidly expanding vessel for another person's body. And when Kardashian West revealed on Keeping Up With The Kardashians that she had been diagnosed with placenta accreta, a serious condition where the placenta becomes embedded in the uterine wall, people reacted sympathetically, even praising her for highlighting a condition that is not often publicly discussed.

Yet for whatever reason, the second Kardashian West revealed that due to her previous pregnancy complications, she would be hiring a surrogate — something that nearly 750 mothers in the United States do per year — people reacted with outrage and skepticism. There was widespread disbelief that anyone would be vain and silly and self-absorbed enough to outsource their pregnancy to another woman, regardless of the reason. (Even though, let's not forget, Kardashian West has already demonstrated twice that she is willing to endure considerable physical transformation and pain to carry and deliver her children, as she's spoken openly about how difficult her labor with Saint was). If she wants another child, the reasoning goes, she should be willing to sacrifice everything for that child — up to and including her health and safety.

In our culture, there is a dominant belief that motherhood must be synonymous with total self-sacrifice. To have a child, the reasoning goes, you should be willing to not only sacrifice your physical comfort for nine months, but also your personal identity for arguably the rest of your life, not to mention your ability to comfortably wear any item of clothing without a Spandex waistline.

This narrative is dangerous for multiple reasons — it's sexist (fathers are not expected to make the same sacrifices that mothers do), and, as we are increasingly learning with the rise of postpartum depression, it's doing a real number on new mothers' mental health. But the worst thing about it is that it shames women like Kardashian West simply for telling the truth: that pregnancy and labor can be really awful and traumatic, and if many women had the choice, they would absolutely avoid going through them.

Let's be real: if you had more than $100,000 burning a hole in your pocket, and you desperately wanted another child, wouldn't you do the same thing?

If we take Kardashian West at face value and conclude that she hired a surrogate because she didn't want to put her health at risk to have another child, that alone should be reason to leave her alone. In fact, the appropriate response to that is sympathy. As difficult as pregnancy is, any woman who wants another child and cannot carry one will tell you that it is a tremendously painful experience.

But let's assume she's lying. Let's assume that Kardashian West just straight-up didn't like being pregnant, and that she's just not willing to put her body — which, let's not forget, is her primary source of income — at risk to carry another child.

So what? Who cares? And let's be real: if you had more than $100,000 burning a hole in your pocket, and you desperately wanted another child, wouldn't you do the same thing?

Let me be the first person to stand up and say: Yes, I absolutely would. I did not have a complicated pregnancy, but it was nonetheless difficult, for both physical and mental health-related reasons: I was nauseous pretty much all the time, I basically had a nine-month-long UTI, and I found it incredibly difficult to reconcile my aggressively career-oriented self with the mommy I was about to become. These feelings, combined with me losing my job when I was four months pregnant, sunk me into a deep depression.

Now that I actually have a child, I know what every other mother does: that having him was the best decision I ever made. But had I had the option, could I have done without the ridiculous pressure to breastfeed and spending the past 6 months hooked up to what is essentially a cow-milking machine, or the lack of sex with my husband as a result of discomfort from breastfeeding? Could I have foregone the subsequent enormous changes in my body, that I have neither the time nor energy to try to change? Hell yeah, I would.

Was I willing to sacrifice my body, both during pregnancy and afterward, in order to have my son in the world? No question. Would I make that choice again? Sure. But I don't think it's a fair trade, and had I had the option, I absolutely would've hired another woman to make those sacrifices for me. I wouldn't have even given it a second thought. "Good luck, lady," I would've said as I shoved money in her fist and prenatal vitamins down her throat. "I'll just be over here, drinking an Old-Fashioned, and admiring my non-swollen ankles, which I can still see quite easily."

Ultimately, being pro-choice is not about supporting a women's right to choose whether to carry a baby to term; it is about supporting a woman's reproductive choices, full stop, up to and including how she carries that baby. Kim Kardashian West's reproductive choices should be absolutely none of our business. But now that she, in true Kim Kardashian West fashion, is making it our business, if you believe in a woman's right to choose what to do with her body, it's ridiculous to judge her for doing something that a) is arguably a medical necessity and b) that many of us, given the financial resources, would do ourselves.

Yes, motherhood entails sacrifice. But it is not up to us to decide for other mothers which sacrifices are worth making, and why they are making them.

More Like This
Ginger Zee Had A Perfect Response After A Troll Asked Her "Who's Raising Your Kids?"
Keep Talking To Your Kids About Abortion — It's More Important Than Ever
Kim Kardashian Didn't Introduce Pete Davidson To Her Kids Until 6 Months Into Dating
Kim Kardashian Celebrates "Best Dad" Kanye West On Father's Day With Sweet Posts