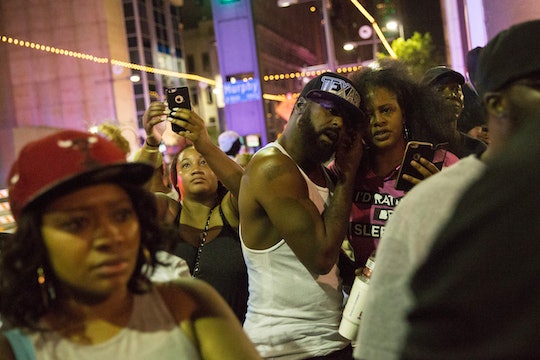 The One Thing We Shouldn't Say About The Dallas Shootings

In the wake of great tragedy, it's easy to feel helpless, hopeless, and daunted by the onslaught of injustice. Last night, at a peaceful demonstration protesting the deaths of two black men shot by police officers, violence was answered with more violence. Shooters staged high up about the crowds in downtown Dallas, Texas, killed five police officers and injured six others. At this time of division and mourning in the United States, it's crucial to galvanize feelings to action; it's crucial to be an ally; it's crucial to speak up. But, the one thing we shouldn't say about the Dallas shootings, no matter who you are, is that "all lives matter."

The phrase, "all lives matter" has come to be a sort of response to the chant of the Black Lives Matter movement. While it sounds inclusive and empathetic, it's sorely not. The phrase is another tactic to erase the struggle of black people in America. Saying "all lives matter" is a verbal sign for turning a blind eye toward the continuing problem of inequality in this country, particularly under the law.

The phrase effaces years of injustice and loss by essentially saying, well, we all have problems. "All lives" do have their problems and struggles — it's true. But the problems of people of color and minorities in America are singular and remain in stark contrast to the privilege white people continue to enjoy. Saying "all lives matter" means that you are choosing to ignore that unequal distribution of privilege and, in doing so, letting it persist.

The deaths of the five police officers in Dallas, Texas, are tragic. The deaths of Alton Sterling and Philando Castile are tragic. The fact that a little girl in the backseat of a car in Falcon Heights, Minnesota, watched a loved one die is tragic. What's becoming increasingly clear is a message we've already learned: the cycle of violence does not resolve the issues of division and inequality. It sustains it. The deaths of law enforcement officials — no matter how unjust and devastating — do not justify undermining others' continued pain and death. There is not an invisible "only" before "black lives matter." Saying "black lives matter" does not mean all other lives don't, but instead means that because of persistent, systemic racism, police brutality, and inequality toward black lives, action is necessary.

The deaths of those in Dallas, Texas, do not change the need to say that black lives matter; that fact needs to be asserted more now than ever. No matter how much it may make sense, don't say, "all lives matter." At this sad moment in our history, time and time again, we are being shown that it is just not true. Until you join the fight to truly make all lives equal, the phrase is worse than meaningless — it's hurtful. Until all lives truly do matter, the phrase is worse than a lie — it's denial.