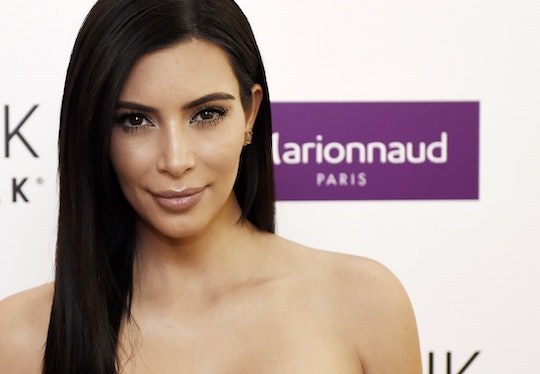 The One Thing We're Not Saying About Kim Kardashian's Selfie

When I saw Kim Kardashian's selfie, I was proud of her for putting herself out there and for celebrating herself so openly in a society that's all too quick to shame and insult. I want to be capable of doing that. But then I thumbed through the comments on the picture and the stories circulating about it online and I realized that the public perception of the photo was mixed — so many people felt like she'd done women a disservice by posting a nude photo. I disagree. She may not be the perfect role model for body positivity, but the one thing we're not saying about Kim K.'s naked selfie is that she doesn't have to be a "perfect" role model in order to inspire thousands of women. In fact, she already has.

Kim is most widely known for two things: her TV show and her body. Though she has a stunning entrepreneurial career, a successful app, a clothing company, a beauty brand, and a successful book, most people know that everyday she spends about two hours on her makeup, and she's the queen of selfies (hence the book). Kim Kardashian has never been shy when it comes to her flaunting her body, and after posting her most recent naked selfie on her Instagram, the debate was not how Kim Kardashian views her body, it was about whether or not she's doing what's right for all women by posting it on the Internet.

You don't have to be perfect to inspire other women to feel proud and capable in their own bodies.

Though Kim K. might not be the most shining example of body positivity we have, it's definitely none of our business what she wants to share when it comes to a body she has ownership over. And it's definitely not helping women anywhere by lecturing her on whether she's a good, or good enough, role model for body positivity. Yes, Kardashian subscribes to a beauty ideal we can all agree is problematic — she waist trains regularly, reportedly changes her diet every 10 days, and routinely posts pictures on social media lamenting the fact that she's not as skinny or thin as she used to be —but you don't have to be perfect to inspire other women to feel proud and capable in their own bodies.

Think about this, for instance: When a male actor posts selfies that are next to nude on his social media, he's not inundated with other men and women telling him to put his clothes back on, to think about the younger boys who look up to him, or worried about anyone using his former "transgressions" against him. He isn't haunted by any past mistakes he's made — because they've all already been forgiven. Instead, we give it a double tap and move on. This isn't the case with women, least of all Kim Kardashian.

Who are we to judge her feminism? Her self-worth? Her body confidence? If Kim looks good and feels good, then we should step aside and let her celebrate that.

In her open letter that Kim penned after posting her nude selfie, what stood out to me the most was when she said:

I shouldn’t have to constantly be on the defense, listing off my accomplishments just to prove that I am more than something that happened 13 years ago.

No, Kim K. shouldn't have to apologize or prove that she is good enough "despite" the fact that she made a sex tape 13 years ago. She shouldn't be on the defensive over something that happened more than a decade ago. Something that space, time, and overwhelming success should have separated her from. Kim should be able to share in those embarrassments alongside her accomplishments the way we all do. Who are we to judge her feminism? Her self-worth? Her body confidence? If Kim looks good and feels good, then we should step aside and let her celebrate that.

I want my daughter to know pushing limits on what's acceptable and what feels good for her own body is something no one has privilege over but her.

Some of the responses on Kim's photo surprised me. And what was most disappointing was that they were made by other women. People said that young girls "shouldn't look up to" Kim, but what's wrong with a woman who celebrates her body? As a mother who is finally learning to embrace and love my own body, I have no qualms with my daughter seeing more women like Kim who feel strong and capable in their bodies. I want her to know that her body is hers, and that her body is always worthy of praise; it's perfect, because it belongs to her. I don't exactly think Kim is the role model I'd like my child to mimic in all areas of her life, but in this, I stand behind her.

I especially loved, and was surprised, when I got to this part in Kim's letter:

Maybe they weren't posted directly onto social media, but imagine all of the millions of women who follow Kim Kardashian and took to their own mirrors or their own cameras and looked at their bodies with newfound respect and inspiration. Imagine all the women who felt inspired to feel good. Proud. Happy. Powerful. Sure, we might not all have the means to look like Kim Kardashian does, but we can all feel inspired to be proud of our shapes and sizes. To me, that was one of the most beautiful things to witness. There are still so many antiquated beauty ideas that society expects us to follow, yet when we break them, we're "too out of line," or we've gone "too far." But I want my daughter to know pushing limits on what's acceptable and what feels good for her own body is something no one has privilege over but her.

I am so proud of the women who could care less about the judgments of others. They care so little about everyone, but so much more about themselves, and the love they possess for themselves is wonderful. It's hard to grow up as a woman in a society that is constantly trying to sexualize you, according to its own rules, and the minute that you step out of that box and embrace your sexuality, they pick you apart.

I wouldn't call Kim brave, because she's made a living off of showing her body, but I would call her inspiring. And if that's the one thing we take away from this, that's enough. Women don't need an ideal of perfection when it comes to finding examples of body positivity to look up to. We need lots of women standing up for what they feel is right for their own bodies. If we want to inspire each other, let's start by being exactly who we are.