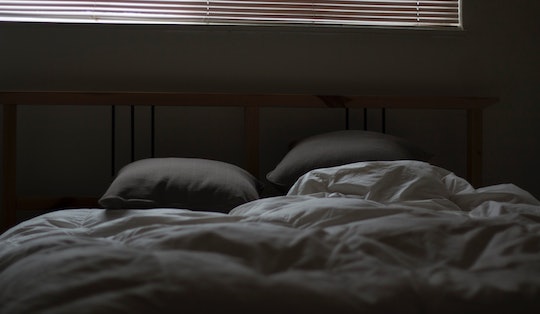 Congratulations on your new baby! Whether you adopted, or became a parent via surrogacy, or pushed it out, or had it yanked out by a surgeon, or you didn't know you were pregnant and thought you just had to poop really bad and then found a tiny infant in your toilet (thanks TLC's I Didn't Know I Was Pregnant for making me scared of pooping), this is a big event. Babies are great. Yes, I'll give the standard disclaimers that they are time consuming, often demanding, and a massive emotional, financial, and logistical responsibility. But they're also a source of awe, amazement, and adoration that only increases day by day. But one thing that doesn't mesh well with having a new baby is having sex... at all, and for so many reasons. I want to talk about the one thing you should know about this common and thorny issue, but first, let's talk about all the reasons that make "sex after baby" a tall order sometimes.

Why Sex After Baby Is Hard

So let's start with the idea that the spirit may be willing but the flesh is weak. Despite their size — you don't get much smaller when you're talking about humans — babies have the unparalleled ability to put their parents through the wringer, physically speaking. If you gave birth, that of course means the horrible things they did to get out of you. They say the vagina is designed to stretch and accommodate a baby coming out of it; while this is true, that doesn't mean the vagina (or the person attached to the vagina) is necessarily happy about it. If your baby decided to be a rebel and be like, "Oh, one designated exit? I don't think so! I make my own exits!" and you had a c-section, that's a whole other level of physically obnoxiousness. And if you're breastfeeding, there's a decent chance, to quote my OB,

Hormonally speaking, you're basically going to be like a post-menopausal woman down there, so use lots of lube.

But even if the baby did not spring from your loins, you're still physically going through an ordeal. You're tired, you almost certainly don't have much time to devote to self-care (exercise, eating properly, mental relaxation, showering), your stress levels are probably high, and if you're anything like me, your middle and lower back will be in constant agony from lugging around a baby all day (for months). So when the baby is asleep and it's just you and your partner, even if you're awake enough and really horny and your brain is like, "I am going to get laaaaaaaaaaaaaid,'" your body is like, "Uh UH! UH UH! No. Hell no. Brain, I like you and all, but I am shutting this sh*t down." And Brain is like "Body. Come on. I respect that you've been through a lot lately, but I'm asking you to take one for the team here." But Body is vigorously shaking her head, "I know you're usually the thinker, but I am telling you this is a horrible idea and I am just shutting it all down before you destroy us both. You'll thank me later."

And Body is probably right. (Sometimes Brain needs to shut up and we need to listen to Body.)

There's also a very real possibility that the flesh is willing but the spirit is weak. Maybe your body is totally fine with doing the dirty, but your brain is so stressed out that it's shutting down your sex drive. There's certainly no dearth of issues to stress out new parents: adjusting to their new role, worrying about finances, worrying about their baby, worrying about getting back to work or leaving work or how to balance a baby and work. Lots of worry is pretty normal is what I'm saying.

But even if your Brain and your Body are on the same level (it totally happens!), you have another brain and body to deal with: your baby's. And, by and large, babies do not want you to have sex. I've long theorized that infants are nature's birth control, because they don't want to have to compete with siblings for parental resources too early. I've also theorized that babies are tiny jerks who don't want you to get off in an attempt to assert their dominance (don't let the doe eyes and inability to hold their head upright fool you). It's like they know when you finally mustered the energy and physically wherewithal to bang and that's when they start wailing.

And here it is. Queue up the fanfare:

In some cases, there is absolutely nothing you can do about the fact that you aren't getting laid for a while; that is normal and that is okay.

I know, I know. It's a bummer right? Whether we're talking having way less sex than you'd like, less enjoyable sex than you'd like, or absolutely no sex at all, sometimes it's just out of our hands. But this realization can be a good thing, because in admitting that the situation may well be outside of your control, it's my sincere hope that people can "forgive" themselves for not fixing it right away. There is a level of guilt that goes along with not having sex in a committed relationship. You feel bad for not taking care of your own sexual needs, you feel bad for not being able to fulfill your partner's needs, you feel bad that even though your doctor or midwife gave you the green light to get back in the game you still haven't been able to muster the courage, energy, or drive. But you know what? You have so much going on at this point in your life, it's OK to say, "This is something I would like to fix, but right now, for whatever reason, I can't." I'd also like to highlight the word "normal." While most people get the go-ahead to resume sexual activity around six weeks post-partum, there is no standard birth recovery.

Some people are ready to start back up even before six weeks. Others need another week or two after they've been told they can do it. And there are some who are not ready for any number of reasons months and months after birth. Each of those scenarios is totally normal.

Of course I will admit, even if you can take your relative powerlessness over the situation as a reassurance, I know how intensely frustrating that can be.

So What Can You Do When There's Nothing You Can Do?

While there are no fool-proof methods to fix things, there are some things you can attempt to ameliorate the situation, even if you don't solve it completely. They will require a little creativity and (potentially) a lot of patience.

One thing you can do to help this situation is broaden the way you think about intimacy. For heterosexual couples in particular, "sex" is often thought of in sort of limited terms. Like "If it's not P in V it's not really sex". Ummm... why? There are lots of deliciously satisfying, intimate, sexual situations you can find yourself in that may be more compatible with your post-partum sex drive, physical capabilities, and time limitations. Not to mention that switching up the bedroom routine a bit might be just what you need to get the engine running again.

Speaking of switching things up a bit, some people feel that they can't have sex in their bedroom anymore because their baby is in there. This could be logistical (as in your baby wakes up if you so much as blink too loudly), or it could be that you're weirded out by having your kid in the room while you go at it (understandable, even if they're asleep and otherwise completely unaware of what's happening). So journey beyond your bedroom! It sounds like a "no duh" piece of advice, and it probably is, but there are a couple good reasons to go for it. Not only does it address logistical concerns, but having sex in exotic new locations (like... the couch or on a table... so exotic!) is that you may necessarily have to try different positions which, if you're having physical difficulty getting back into the swing of things, might help you out. (Warning/Admission: This bit of advice might be a little difficult if you have other kids in the house... especially kids who wake up after bedtime and quietly wander the halls like malevolent little specters.)