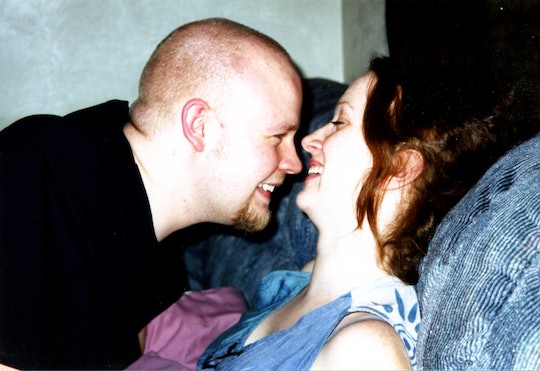 To the uninitiated, trying to conceive can seem like a fun idea. If, like me, you own ovaries and a uterus, and your partner owns sperm, an initial thought of, "Woo hoo! I get to have lots of sex!" will probably bombard your mind. However, conceiving isn't always as easy as scared teenagers on MTV would have you believe. As time goes on without a positive pregnancy test, the pressure to make a baby may start to effect your relationship. That's why there's one thing you need to know if you feel disconnected from your partner while trying to conceive, that will not only help you feel closer to your partner, but will help you gain a little perspective while you continue to try and grow your family.

In the middle of ovulation cycles, pregnancy tests, and the perception of failure, try to remember that your relationship is more than your ability to conceive.

This may seem like a given, but the harrows of trying to conceive when it doesn't happen right away, or you lose one or more pregnancies in the process, can take a toll on even the most stable relationship. If you're anything like my partner and I, it's not that you suddenly start believing you're only in love to have babies. Rather it's that you forgot there is so much more to the two of you than your combined ability to conceive.

Our first two babies were conceived without either one of us really trying all that hard. Because of that privilege, I truly had no idea the toll a year and three miscarriages would take on us. Feeling sexy was the farthest thing from my mind, especially when I felt like my body was broken. If you can find ways to make sex exciting and intimate again, amidst the pressure of trying to conceive, please do. Your relationship will thank you for it.

Feeling sexy was the farthest thing from my mind when I felt like my body was broken.

However, it wasn't just the sex or my ability to feel sexy. My partner truly is my best friend. While we were trying to conceive, succeeding, and then suffering through miscarriage after miscarriage, it was impossible not to lose sight of our friendship. Activities of daily life still continued. I still had to go to work. We still had to parent our two other children, one of whom has special needs. I also had to manage my depression through all the chaos. Where was the time to connect emotionally with one another? Where was the time to grieve the losses of wanted pregnancies? You see, dear reader, my partner and I have very different processing styles. We've honed our communication over the years so that both of us can either get our needs met, or confront the issue of not getting our emotional needs met. But in the midst of all we faced when we were trying to conceive, there genuinely was not enough energy left for emotional labor beyond what I was already doing.

The truth is that it is normal to feel disconnected from your partner while trying to conceive. Sex can become rote, and you might begin to shut off your ability to connect entirely because you are so sick of feeling disappointed. But your relationship is more than your ability to conceive. If you want to have a relationship at the end of all this trying, no matter the outcome of your efforts, you have got to remind yourself of that simple fact.

For us, somewhere within all the trying we stopped being each other's best friend and just became each other's co-parent. We were still kind to each other, besides the occasional snark, but we were more like roommates than partners. It wasn't until months after I had our Reiki Rainbow baby that we finally found the time and space to name what had been going on in our relationship.

For us, somewhere within all the trying we stopped being each other's best friend and just became each other's co-parent.

What we found is that even though we were 13 years into our relationship by the time I experienced my first miscarriage, and had already been through all the highs and lows 13 years can bring, we could not rest on the laurels of past relationship success. We needed to actively honor our history together and continue to cultivate the connection that led us to want to have children together in the first place.

I wish we had been able, throughout the hardships of trying to conceive, to remember our relationship was so much more than that. I think actively acknowledging this undeniable face, especially in those moments of loss and pain and disappointment, would've made for less isolation, depression, and resentment for both of us. My gift to you, dear reader, is the gift of acknowledgement and intention. Now that you know, I hope you won't have to wait two years and contemplate ending your relationship before you decide to actively reconnect.

More Like This
How To Ask Your Partner For Help Around The House
I’m A Newly Single Mom. How Do I Get Over My Body Insecurity?
Reddit Applauds Mom Of Five Who Stood Her Ground & Left Sleeping Dad Behind
21 Back-To-School Instagram Captions For All The Feels