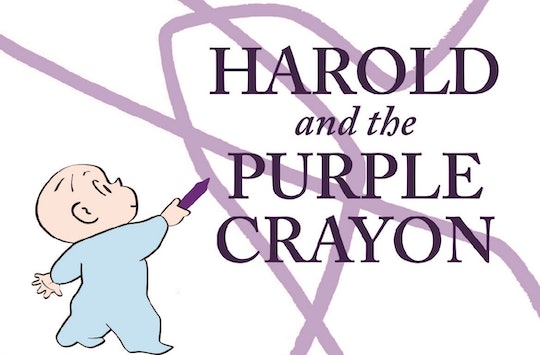 Harold And The Purple Crayon is the charming story of an imaginative boy and his artful adventures, and it has delighted readers since its publication in 1955. If you have a kid, there's a good chance you're read the story a couple times (or a couple hundred). But even if you have the entire story memorized, there is probably one thing you never knew about Harold and the Purple Crayon by Crockett Johnson.

For someone climbing up into his 60s, Harold has aged remarkably well. The book is widely considered a classic of children's literature, and it was listed among the New York Public Library's 100 Great Children's Books. Of course, the minimal but impactful illustrations seem tailor-made for the screen, and the IMDB lists several film and TV adaptations ranging from 1959 to present day. And Harold has soared into the tablet age as well. As PR Newswire explained, when the Harold and The Purple Crayon interactive book was released by Trilogy Touch Interactive Storybooks in 2011, it immediately hit the top of the iPad Book App Chart. It's clear this sweet story has had a lasting cultural impact for generations. That's why it's all the more shocking to learn that the original submission for Harold and The Purple Crayon was almost rejected by publisher Harper & Row in 1954.

According to NPR, Ursula Nordstrom, who served as director of Harper's Department of Books for Boys and Girls for over three decades, initially waffled on the decision of whether to publish Crockett Johnson's book. In a letter to the author, she wrote, "It doesn't seem to be a good children's book to me, but I'm often wrong," as further noted by NPR. Fortunately for Mr. Johnson (and the rest of the world), she sat with the story for a couple of days and ultimately decided to publish it. Before you get up in arms about the fickleness of editors, remember that she was a legendary force in children's lit who helped classics such as Goodnight Moon and Where the Wild Things Are come into being, as explained in Leonard S. Marcus' book, Dear Genius: The Letters of Ursula Nordstrom. Because of her careful decision, generations of readers have enjoyed the many worlds that can be created with a little imagination.

More Like This
Prince Louis Looks Like Kate Middleton As A Baby In This Never-Before-Seen Photo
42 The Office Quotes About Love That Will Make Your Heart Soar
25 Children’s Books About Death & Grief, To Help Get The Conversation Started
How To Talk To Kids About Tyre Nichols & Racist Systems
What Parents Are Talking About — Delivered Straight To Your Inbox