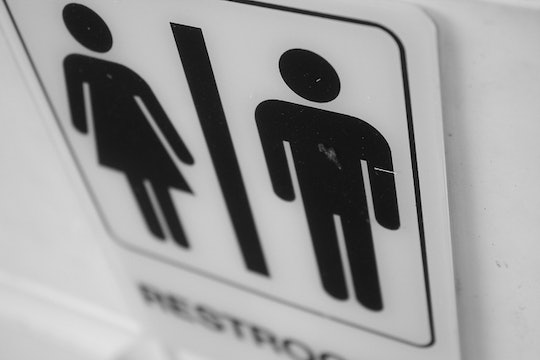 On Monday, New York City took another big step towards equal rights for transgender people. Mayor Bill de Blasio signed an executive order allowing trans individuals to use city-owned bathrooms and locker rooms based on the gender with which they identify, rather than the gender they were assigned at birth. These new bathroom laws are popping up in states across the country, but they're getting defeated in plenty of states too because of a persistent myth. So here's the one thing you need to know about transgender bathroom laws: they don't lead to higher incidences of sexual assault.

Some opponents of these laws like to promulgate the idea that, if transgender people are allowed t0 use the bathrooms in which they feel comfortable, rapists will don dresses and wigs en masse in some sort of nefarious twist on Some Like It Hot. They'll pretend to be transgender so they can sneak into women's rooms and assault unsuspecting bathroom-goers. Or, as Republican former Arkansas governor Mike Huckabee said, ever-so-hilariously, in 2015, "Now I wish that someone told me that when I was in high school I could have felt like a woman when it came time to take showers in PE." Really great guy, that one.

But there's a major problem with the panic. The evidence just doesn't support these claims.

Media Matters reached out to experts in twelve states with anti-discriminatory bathroom laws to ask if the incidences of sexual assault had increased since the laws were enacted, and the answer was a resounding "no." Or, more specifically, as Christopher Burke, the chief of the police force in Cambridge, MA, said to them in an email exchange, "There have been no incidents of men dressing up as women to commit crimes in female bathrooms and using the city ordinance as a defense."

Or, in the words of Amy Sneirson, the Executive Director of the Maine Human Rights Commission, "I know that this concern persists but I personally have not seen any factual basis for it."

Or as Minneapolis police spokesman John Elder told Media Matters, sexual assault due to the new bathroom laws has been "not even remotely" a problem, and the idea that men will pretend to be transgender women to sneak into women's restrooms "sounds a little silly."

The list goes on and on. According to The Huffington Post, of the seventeen states and 200 cities that have these sorts of ordinances, exactly zero of them have reported increased bathroom sexual assault as a result.

This is not to say that sexual assaults in bathrooms never happen, because they do. But they're generally not committed by men disguised as women. And it's not like these new laws would somehow legalize bathroom sexual assault. Hey, what happens in the bathroom stays in the bathroom, guys! No, it would still be illegal, and prosecuted to the fullest extent of the law.

You know where sexual assault does happen a lot? To transgender people. Sometimes in bathrooms, sometimes out of them. If the debate about these bathroom laws shows us anything, it's that transphobia is alive and well.

So if non-discrimination ordinances allow transgender people to answer nature's call in a place where they actually feel comfortable, rather than somewhere they're afraid of being beaten or harassed, here's hoping that the rest of the country soon follows New York's new lead.

More Like This
The President Of Ireland Wants To Get Rid Of Homework & Honestly, He's Onto Something
Jennifer Lopez Says Blending Families With Ben Affleck Has Been An “Emotional Transition”
Prince Harry Says He’s Worried One Of Prince William’s Kids Will End Up As “The Spare”
Reddit Backs Mom Who Got Scolded By Teacher For Not Inviting 30 Kids To Birthday Party
What Parents Are Talking About — Delivered Straight To Your Inbox