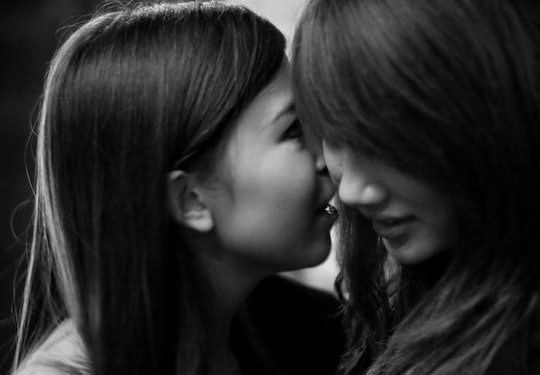 When my friends come up to me and say, "Hey girl, what relationship advice would you give a child-free person like me? What should I do before I have kids?" do you know what I say to them? (I mean, literally nobody has ever asked me that and I would be truly shocked if anyone ever did, but do you know what I would say to them?) I would say, "Friend, embrace all the casual sexiness in your life right now, because after kids sexiness will almost always require more effort."

Now, I'm not saying child-free couples live a Dionysian existence void of responsibilities. Neither am I saying that parents are soulless, assexual malcontents. Sexiness won't disappear (by any means), it just won't be...effortless. But the truth of the matter is this: When you don't have kids, you have at least one less responsibility than your peers with children, and it's a pretty enormous, all-consuming responsibility at that. Plainly put, child-free people are — *drumroll* — freer. And freedom is sexy. But here's the melancholy truth about that freedom, though: Most of the time, we don't recognize our unfettered liberty as the source of tremendous sex appeal until we no longer have it. It's so woven in to the fabric of a relationship that it's mistaken for the relationship itself; it's all lazy Sundays...

...Friday nights at your favorite bar...

...and the freedom of giving the lion's share of your emotional support and energy to one person.

This last one is huge. Not to say, of course, non-parents don't have vast networks of other friends and family upon whom they expend emotional energy, but once you've seriously entangled yourself with another person romantically, they're your primary focus. We have a word for that person: That word is bae, and the acronym that says it all. But when you have kids, things get a bit more complicated when it comes to interpersonal priorities.

In my humble experience, I have never seen new parents struggle with the sexytimes aspect of their post-kids relationship without struggling with other aspects of it as well (barring, of course, child-related medical issues). A relationship's sex appeal doesn't just vanish... but the freedom does. And, as discussed, freedom is often the gracious harbinger of sexiness. But here's the thing: Freedom is not in and of itself the source of a relationship's sex factor. When you're freer, less tied down, it's easier for couples to retain their relationship's spark, but there's sensuality aplenty out in the wide world, even in the parenting world, waiting to be discovered (or rediscovered) by anyone dedicated enough to find it.

There are also some magic words. Two little words that can help anyone (but especially those among us with children) keep the home fires burning until our wee ones fly off on their own. One thing that, if said every day, can keep your relationship hot in the face of responsibility, stress, and small children constantly vying for all of your attention. Ready?

And the magical phrase is:

Think of it in terms of the greatest '80s movie of all time, The Princess Bride. Westley was a farmhand for Buttercup's family, and she delighted in ordering him around. After each of her demands, Westley would simply reply "As you wish."

It was all he ever said to her. But over time, Buttercup realized something:

She was amazed to discover that when he was saying 'As you wish' what he meant was 'I love you.'

Funny how language works, huh? While we should always say what we mean, sometimes shorthand is necessary. Because when it comes to love, especially a lasting love, it's hard to put it into words every day. But when you make a habit of demonstrating mindful appreciation for one another, "thank you" comes with an emotional asterisk that leads to a footnote saying, "I truly and sincerely appreciate everything you do, including that last thing you just did. Because that thing you just did helped make this larger thing we're doing together, this whole family thing, run more smoothly. And on top of loving and being grateful for you, I love and am grateful for this life we have together. It can be a lot of work sometimes and I know it can leave us both exhausted, and that makes it hard to tell you every single day that you continue to be one of the most important people in my life."