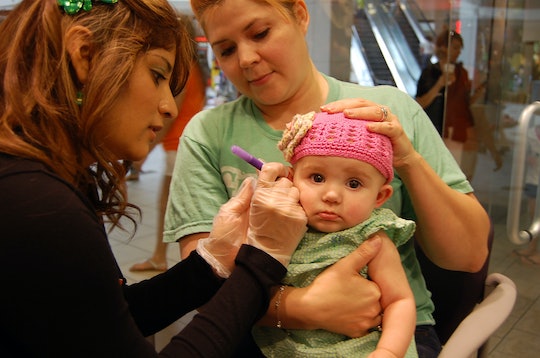 My ears have been pierced since I was approximately a year old. I have zero memories of actually getting them pierced, nor of what it’s like to not have holes in your ears to fill, or to not have a collection of tiny metal baubles and precious stones (both real and fake, let’s be honest). I've never really asked the question of how old or how young you should pierce a kid's ears because I've really only known the answer to be one thing.

It’s never bothered me that my parents made the decision for me. In fact, I can’t recall a single time in my life when I wasn’t happy to have pierced ears (okay, except for the occasional infections that plague all of us with piercings). I got a second hole pierced in each ear when I was in middle school and had some sense of what I was getting into. When I worked in an office, forgetting earrings in the morning was something that was sure to throw off my day. It would be slightly inaccurate (and also cliché) to say I felt naked without them, but still, it felt weird, like I had a sock on inside out, or a tag that wouldn’t stay put or, something equally annoying yet subtle to everyone else around me.

As you can see, I'm fairly attached to my pierced ears. However, now that I’m a mom, it’s occurred to me that, despite my own personal comfort with the decision my parents made, it’s actually kind of a big deal to make a permanent choice like that on behalf of your child’s body and physical appearance. If I had a daughter now, would I make the same choice? I’m not sure, to be honest. My own child is a boy, which is not to say that he’ll never get his ears pierced, but that my partner and I haven’t considered having it done for him at his young age. But if we had a girl? If we ever have a girl? I’m still not sure.

It’s actually kind of a big deal to make a permanent choice like that on behalf of your child’s body and physical appearance.

But here’s what I do know: I know my mom had to wait until she was an adult to have her ears pierced, and she didn’t want that for me. I know she took me to a doctor’s office and had a nurse do the actual piercing. I know she took care of the cleaning and care of my ears for years, until I was old enough to do it myself. I know she realized that, if I didn’t like it, I could let the holes close when I got older. I know she heard the occasional comments from judgmental strangers (which, even now, she sticks up for them with more patience than I probably would have, acknowledging that it’s not wrong to make a mom think about the choices she's making for her kids). I know my dad was in full support of the idea. I know it was the '80s, before conversations about consent and bodily autonomy and body positivity and gender neutrality were as common as they are now, and where brightly colored, neon-pink feminine stereotypes were the norm (for the record, I didn't get to wear brightly, colored, bold earrings; I got tiny studs).

I know that, in my family, growing up with pierced ears was considered special. Why make their daughter wait, my parents thought, when they could provide it for her now?

It's a different mindset than many of us have now when it comes to pierced ears. I see that, and so do my own parents. In a lot of ways, I’m proud of them. When I’ve brought this up with my mom recently, she was quick to acknowledge that she’s not sure if she’d make the same choice now. I think this shows that she’s thoughtful and open to discussion, and she doesn’t make decisions lightly, now or then. I think it also shows that she did what she thought was best at the time, with the information she had.

Isn't that what we're all doing?

There’s so much mom-shaming and judgment out there that’s it’s a wonder that it’s not yet an Olympic sport.

But perhaps instead of jumping quickly to the “how could you?” we could instead gently ask, “Why did you?”

Because there are often reasons. And if those reasons don’t affect the health and well being of the people around them, and if they’re doctor-approved, who are we to judge?

I suppose it’s lucky that it turned out I’d be as happy as I am to have pierced ears of my own. I used to jam my own rhinestone studs into the ears of my teddy bears when I was a little girl. Perhaps even at that young of an age, my parents knew a thing or two about their own daughter.