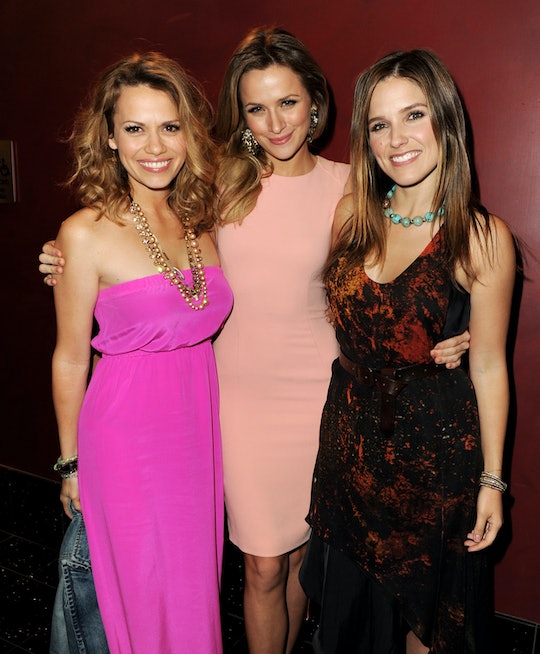 Swiftly following the massive (and viral) coverage of some of Hollywood's biggest sexual misconduct scandals, former One Tree Hill writer Audrey Wauchope revealed on Twitter over the weekend the reportedly toxic work environment the popular teen show was for women. And, much like the previous accusations and revelations in the industry, women flooded to her side — specifically her female co-workers, women on the cast and crew of One Tree Hill. Now, the One Tree Hill cast and crew has jointly accused creator Mark Schwahn of alleged sexual harassment in a letter published by Variety that both calls Schwahn out for his alleged actions and reaffirms the women's support for each other. (Romper reached out to Schwahn's attorney and agent, but did not hear back at the time of publication. The article will be updated to reflect any statement Schwahn may release.)

Wauchope detailed Schwahn's supposed past behavior in a series of tweets without mentioning him by name. She described her first writing job, alongside writing partner Rachel Specter, as initially thrilling — though it didn't remain so for long. "To say we were excited was an understatement," Wauchope wrote of being hired for the show. "To say we left that job demoralized and confused is also an understatement."

Wauchope reports that female writers were hired for the show based on their looks, and the experience of working on the show was often dehumanizing. According to the tweets, some women were allegedly victims of unwanted touching by the showrunner, who would reportedly pet their hair and massage their shoulders. Though Wauchope did not name the show or showrunner, Twitter, and fans of the show, quickly began to suggest who the thread was about.

One Tree Hill cast members made it clear that they supported her and any other women who might come forward. That culminated in a letter, published by Variety, signed by 18 former co-stars and crew members: Sophia Bush, Hilarie Burton, Bethany Joy Lenz, Danneel Harris, Michaela McManus, Kate Voegele, Daphne Zuniga, India DeBeaufort, Bevin Prince, Jana Kramer, Shantel Van Santen, Allison Munn, Audrey Wauchope, Rachel Specter, Jane Beck, Tarin Squillante, Cristy Koebley, JoJo Stephens, and "all the rest of the women we worked with who are finding their voices as we speak."

The letter in Variety expressed how much their time on the series had impacted them because of the alleged behavior occurring. The effects were long-lasting in more ways than one, they stated.

All of the female cast members of One Tree Hill have chosen this forum to stand together in support of Audrey Wauchope and one another. To use terminology that has become familiar as the systemic reality of sexual harassment and assault has come more and more to light, Mark Schwahn's behavior over the duration of the filming of One Tree Hill was something of an "open secret." Many of us were, to varying degrees, manipulated psychologically and emotionally. More than one of us is still in treatment for post-traumatic stress. Many of us were put in uncomfortable positions and had to swiftly learn to fight back, sometimes physically, because it was made clear to us that the supervisors in the room were not the protectors they were supposed to be. Many of us were spoken to in ways that ran the spectrum from deeply upsetting, to traumatizing, to downright illegal. And a few of us were put in positions where we felt physically unsafe. More than one woman on our show had her career trajectory threatened.

The through line in all of this was, and still is, our unwavering support of and faith in one another. We confided in each other. We set up safe spaces to talk about his behavior and how to handle it. To warn new women who joined our ranks. We understood that a lot of it was orchestrated in ways that kept it out of sight for the studio back home. We also understood that no one was fully unaware. The lack of action that has been routine, the turning of the other cheek, is intolerable. We collectively want to echo the calls of women everywhere that vehemently demand change, in all industries.

Many of us were told, during filming, that coming forward to talk about this culture would result in our show being canceled and hundreds of lovely, qualified, hard-working, and talented people losing their jobs. This is not an appropriate amount of pressure to put on young girls. Many of us since have stayed silent publicly but had very open channels of communication in our friend group and in our industry, because we want Tree Hill to remain the place "where everything's better and everything's safe" for our fans; some of whom have said that the show quite literally saved their lives. But the reality is, no space is safe when it has an underlying and infectious cancer. We have worked at taking our power back, making the conventions our own, and relishing in the good memories. But there is more work to be done.

We are all deeply grateful for Audrey’s courage. For one another. And for every male cast mate and crew member who has reached out to our group of women to offer their support these last few days. They echo the greater rallying cry that must lead us to change: Believe Women. We are all in this together.

In the letter, the women explained how much they looked out for each other throughout their days on One Tree Hill, something that has clearly continued long past the show's finale in 2012. They were able to confide in and comfort one another, and now they can stand together behind this incredibly powerful message. In the wake of the letter, other women from the show have come forward to add their names to the list and male co-workers have also expressed their support.

Despite that outpouring of support, it remains unclear what the next step will be. Schwahn is currently the showrunner of E!'s The Royals, and has yet to release a statement of his own.