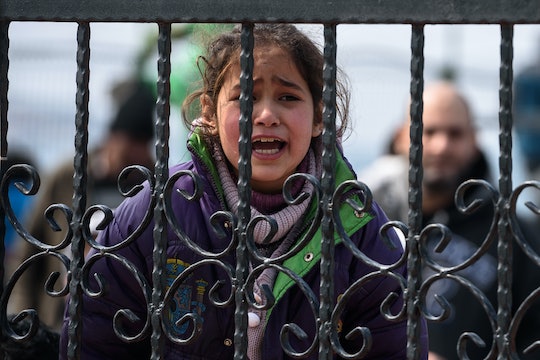 After three bombs exploded in Belgium's capital of Brussels Tuesday morning, the country raised its terrorism threat to its highest level. The city is still reeling from the attacks, and many people have shared their shock and support online with phrases such as "Je suis Bruxelles," "Pray for Belgium," and heartbreaking drawings of the famous Belgian cartoon character Tintin crying. However, some have used the Brussels attacks as an opportunity to blame refugees for terrorism. It's a belief that's built on faulty logic and racism, and there's one tweet that perfectly summarizes why refugees are not to blame for the attacks in Brussels.

This finger-pointing is not a new problem. After the Nov. 13 terrorist attacks in Paris, many were quick to blame the influx of Syrian refugees to Europe. None of the attackers were actually refugees, although one attacker may have posed as one, according to the BBC, and most of the Paris attackers were in fact European nationals. While it would be blessedly simple and easy to simply blame a group of people for these horrific acts, it would be both incorrect and ineffective. Even blaming radicalization of religious beliefs is proving to be fruitless — the American Civil Liberties Union has pointed out that the concept that radicalization breeds terrorism is based on a disproven theory.

"Nobody watches YouTube or reads Inspire and becomes a terrorist. It's absurd to think so," John Horgan, the director of Pennsylvania State University's International Center for the Study of Terrorism, told Rolling Stone. People are drawn to terrorism for many reasons: they might be angry about government policies, racism, or the way they are treated, or they're drawn to the idea of camaraderie, excitement, and purpose that terrorists groups promise. "There are the bigger social, political, and religious reasons people give for becoming involved," Horgan said.

And yet, the attacks in Brussels are still breeding commentary such as this:

Blaming refugees or Islam for terrorist attacks is not only senseless, but it feeds into creating divisiveness, which is exactly what ISIS is aiming for. Blaming Muslims or refugees for the attacks is like saying all of Christianity was responsible for the Planned Parenthood attack in Colorado. It's important to remember that there is so many more factors in these situations.

British journalist, broadcaster, and How to be a Woman author Caitlin Moran tweeted in response to hateful commentary about refugees, and her words sum it up best. Islam is not the problem, and refugees are not the problem — terrorists are. The same fear and shock that ripples through Brussels, Paris, and the world after these attacks is the same shock and fear refugees have faced when choosing to flee ISIS' violence in their home countries.

It's a good reminder that we're all on the same side here. As LBC radio host James O'Brien put it on Tuesday morning:

The usual characters will be trying to tie this into the unfolding refugee crisis across the world. You have to respect people's right to do that. But I would remind you... the massive, massive, massive majority of people fleeing Syria and Iraq in particular are fleeing a world in which occurrences like the one in Brussels today are utterly, utterly normal. They are fleeing a world where seeing people blown up in front of them or beside them or returning to buildings that no longer exist is absolutely run of the mill.

Seeing the chaos and heartbreak that emerges during terrorist attacks in Europe should only be an even stronger reminder of why our borders need to stay open to refugees — because that violence is exactly what they are fleeing from.