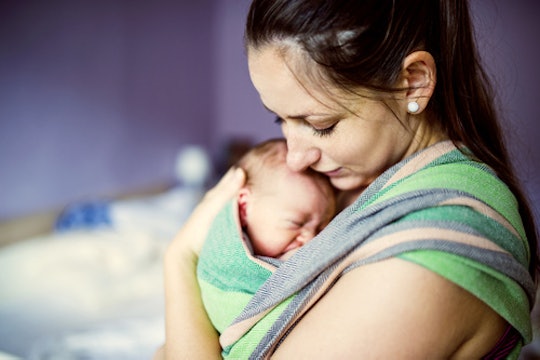 The One Word That Will Save You Postpartum

By the time I came home from the hospital after having my first baby, I hadn’t slept in three nights. I was cramping and bleeding for way longer than I’d anticipated, and everything just hurt. I also had a chain of stitches underneath me that forced me to sit on a Boppy at all times and made going to the bathroom pretty damn unpleasant. I was a wreck, until I learned the one word that made my life so much easier postpartum.

When I got home from the hospital, I just wanted to curl up under the covers and sleep until I felt back to normal or close to it. But of course, I couldn’t do that. I had a newborn baby and suddenly her tiny life took complete and total precedence over my aches and pains. Even my sheer and utter exhaustion seemed unimportant. I had a tiny human to keep alive, and that was all that mattered.

The need to take care of myself didn’t exactly enter my brain. I felt like I was in overdrive, and that all of my new responsibilities were weighing on me. There was so much to do and not enough time to do it. But I didn’t want to fail in my first test of new motherhood. I decided I could handle it all. I would be Super Mom. I would embrace motherhood, and no one would see me falter.

I don’t remember trying to rest or relax during the newborn days, and I certainly didn’t ask anyone for help. I paced around my house, constantly rocking a fussy baby and learning how to do everything with one hand. Otherwise I was nursing, learning how the hell to strap a baby in a carseat, or watching The Happiest Baby on the Block DVD on repeat when I couldn’t calm my baby down on my own. (I didn’t have time to read the book and the soothing techniques were incredibly necessary). When the baby finally did go to sleep, I’d sprint around the house during that 20-minute catnap, trying to load the dishwasher or throw in a load of laundry from a pile that had become so high I wondered if I might drown in it.

I could barely put my baby down. How was I supposed to be practicing self-care?

When people mentioned “self-care”, I imagined escaping outside for a hot stone massage or a haircut. I read articles online about how important self-care was. But the whole concept seemed so out of reach. I could barely put my baby down. How was I supposed to be practicing self-care? There was hardly time to shower or wipe the crusted breast milk out from under my boobs, let alone actually give myself some TLC. There was so much to do and I was determined to do it all. In my new mom haze, I couldn’t really foresee another option.

What made the transition even harder, though, was that on top of my new responsibilities, everyone wanted to come and meet the baby. I felt like I was hosting a never-ending gathering of family, friends, and curious guests on an incredibly limited sleep schedule. The days and nights alone were enough to drive me to the brink. But the endless cycle of visitors was a lot to handle, too. Somehow, I figured it was all par for the course. Instead of asking anyone to wait to come over, I tried to accommodate them. I didn’t want to hurt their feelings, especially since they were excited to meet the baby. It didn’t occur to me that perhaps I was trying to do too much, too soon, and was probably why I’d become so depleted, so quickly.

When I became a mother for the second time, I remembered just how draining my first postpartum experience had felt. Now that I had two kids to care for and not just one, I was even more nervous. Just thinking about the word “postpartum” gave me anxiety. But I knew I wouldn’t be able to do things at the same speed. And while I didn’t know exactly how much “self-care” I could manage, I knew that I could slow things down. I wouldn’t try to be Super Mom this time. I wouldn’t feel guilty if friends had to wait a week (or two) to meet the baby. I would exercise my right to take my time getting back on my feet, and that would have to be good enough.

With two small children always attached to me, I realized that doing everything and saying “yes” to everyone wouldn’t be an option. So I simply started saying “no” — and I said it a lot.

With two small children always attached to me, I realized that doing everything and saying “yes” to everyone wouldn’t be an option. So I simply started saying “no” — and I said it a lot. Cleaning the house? Nope. Having a steady stream of constant visitors? No way in hell. I might not get a break all the time, or even once in a while, but I sure could keep things simple, so that’s exactly what I did. In fact, minus a walk around the block with the baby wrapped in the Moby, we didn’t leave the house for close to a month, and it was exactly what I needed. Instead, I laid around topless, breastfeeding on demand, eating whatever food was lying around and letting my older child snuggle up, hold the baby, or watch TV. That, to me, was self-care.

By the time we ventured outside, I felt ready to deal with the world. When we had visitors, it was enjoyable instead of exhausting. By the time I ran the vacuum, I had to dump the filter three times just to clean the playroom carpet. Still, I had more time to simply snuggle my new baby and my big kid, which is really what the postpartum period should be all about.

When you’re a new parent, saying no to caring friends and family can be intimidating. We aren’t all used to being assertive. But we can’t please everyone all the time and it’s really not our job to do so. We have a much bigger, more important job, and if people don’t understand that, there’s really nothing we can do about it. There's no use trying to be a people-pleaser once you become a parent.

“Self-care” the way we’re used to thinking about it isn’t going to happen, at least in the immediate postpartum period. You have to adjust your expectations and find a new speed. You have to learn to say no.

Self-care, when you’re a new mom, might sound like a total joke. But the truth is, it just comes in small packages. Like actually sleeping when the baby sleeps, or letting the housework go. It might look like learning to baby-wear and taking a long, peaceful walk around the neighborhood, or popping your baby in a bouncer and doing a few gentle yoga poses. It might look like turning on daytime TV or bawling your eyes while watching Gilmore Girls.

“Self-care” the way we’re used to thinking about it isn’t going to happen, at least in the immediate postpartum period. You have to adjust your expectations and find a new speed. You have to learn to say no. The most important thing to realize is that you just had a baby and you don’t have to do it all. In fact, you don’t have to do anything but heal and figure out this whole mom thing. And that alone is totally enough.

More Like This
Paris Hilton Is Officially A First-Time Mom
When Does A Baby Recognize Their Father? A Pediatrician Explains
The Best Travel Tips For Solo Parenting
Does The FDA's Plan To Limit Lead In Baby Food Go Far Enough?
What Parents Are Talking About — Delivered Straight To Your Inbox