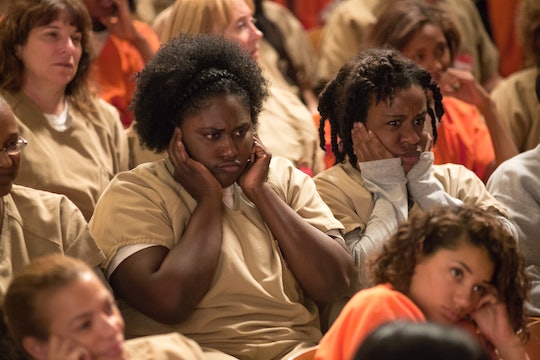 The First Look At 'OITNB' Season 5 Is Intense

Orange Is The New Black ended its fourth season on an explosive cliffhanger. After tensions at the prison reached the breaking point, the inmates turned on the guards, with Daya picking up a gun and pointing it at a guard just before the episode ended. A brand new look at the new season picks up just where the last one left off, and the Orange Is The New Black Season 5 clip shows Daya still locked in the standoff.

The clip doesn't reveal Daya's decision – will she use Humphrey's own gun to end his life or not? – but instead captures how overwhelming the moment is. All of the inmates are shouting, pushed to the edge due to the constant harassment from the guards and Poussey's very recent death, and they want Daya to take action now that she has the upper hand for the moment. But even after everything that happened, murdering a guard would be serious; it would be a choice Daya might not come back from. The clip provides no answers, though a gunshot is heard as it ends.

Piper and Alex also make an appearance in the clip, vowing to turn and walk away from trouble from now on – which they promptly do when they see the riot going on.

According to a Netflix press release, Season 5 of Orange Is The New Black will take place in real time over the course of just three days. It will start right where Season 4 finished and presumably explore the fallout of whether or not Daya actually kills Humphrey. Whatever she decides to do, the situation at Litchfield has become so tense that something will need to be done to restore peace – if peace can even be restored.

An interview with actress Dascha Polanco provides a hint about whether or not Daya could pull the trigger. Polanco believes that after everything Daya has been through, she's definitely capable of doing so. She tells The Hollywood Reporter, "The boiling point has tipped over. At this point, Daya is thinking, 'F**k everyone. I’m going for it.'"

Later on in the interview, Polanco continues, "She's in a dark place. Dayanara's a victim of her circumstance. It's a cycle that keeps on repeating itself. She's been fighting it for so long and now there's no way of her fighting it. Right now it's her accepting things and I think she's over it." That definitely makes it sound like Daya could choose to end Humphrey's life, which would have major repercussions not only for her, but for everyone at the prison.

Season 5 of Orange Is The New Black will debut on Friday, June 9 on Netflix.