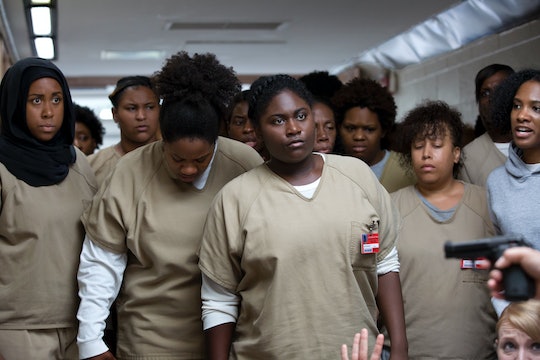 Let's Talk About That Ending On 'OITNB' Season 5

The riot at Litchfield took up the entirety of Season 5 of Orange is the New Black, but unfortunately it may have done more harm than good. Warning: spoilers ahead! Negotiations between the inmates and the administration dragged on for episodes without agreements being reached, and when it finally seemed like they might accomplish something, all hell broke loose. The only leverage the inmates had were the guards they were holding hostage, but when they were set free the inmates lost their advantage. The prison was stormed by men in riot gear who took it back by force, and the Orange is the New Black Season 5 ending left the fate of all Litchfield inmates up in the air.

Most of the inmates were taken into custody by guards and counted before being loaded into buses, their destination unknown. One officer did remark that they weren't going to let any of the inmates back into Litchfield, so it's very possible that the women will all be transferred to other prisons. Litchfield may end up closed entirely, or populated with a new group of inmates who had no connection to the riot. But there were a group of women who were not rounded up with the rest, and their fate is even more uncertain.

A group of inmates had taken refuge in an unused part of the prison: an old pool that Freida had turned into a survival bunker. Taystee, Cindy, Suzanne, Piper, Alex, Freida, Red, Gloria, Nicky, and Blanca had all evaded initial capture by taking refuge there to avoid the fighting. The problem is that they were assumed to be violent and planning an attack because they chose to hide out. The guards were prepared to take them by any means necessary, even if their methods resulted in casualties.

Season 5 ended without revealing what happened to those women. They stood holding hands in the empty pool, waiting to be found while explosions hit just outside the door. It was clear that the officers didn't care about hurting them, so there is a chance that one or more of the women might end up dead. There was already one casualty in Piscatella, who was shot accidentally by a careless guard.

The group of women left behind in the bunker were some of the most popular characters on the show, and it's unlikely that all of them will be killed off. The likelihood of there being no casualties at all, however, is just as implausible. The fate of the women of Litchfield remains more uncertain than ever and the only thing that seems definite is that Season 6 will be different than any season that has come before it. There's no telling what the future will bring.