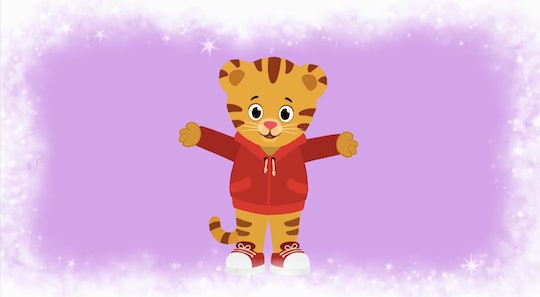 When my daughter Claire became old enough to watch television shows, Daniel Tiger's Neighborhood was one of my first picks. Sure, it's educational and, man, are those easy-to-remember songs a helpful parenting tool, but the real reason I was jazzed about the show had something to do with a piece of my childhood history and the program I grew up knowing and loving — Mister Rogers' Neighborhood. And in case you still aren't seeing the link, let me fill you in on the one thing you never knew about Daniel Tiger's Neighborhood: The show is a Mister Rogers' spinoff. And all of those sweet characters your kids are falling in love with? You've kind of seen them before, too.

And with that little fact, it's easy to see not only why so many parents love Daniel Tiger's Neighborhood (hello, nostalgia), but also why the show is so effective in teaching children about emotions, conflict, and just basic life skills. Because, guys, Fred Rogers was a pro at all of that stuff. No matter whether it was his soothing voice, cheery red sweater, or the way he said, "Won't you be my neighbor?" kids and adults alike have always loved what Rogers had to offer.

On April 5th, 1954, Daniel Striped Tiger appeared for the first time on the first episode of "The Children's Corner," a live, weekday afternoon show on WQED-TV written by Rogers and host Josie Carey.

"Originally, a bird was supposed to come out of the clock that was drawn on the set wall. The night before, WQED Station Manager Dorothy Daniel presented Fred Rogers with a tiger puppet as a gift at the program's launch party. He decided to use the tiger puppet instead of the bird and named the puppet Daniel, after the person who gave him the gift."

And, so, Daniel Tiger was born. When Mister Rogers' Neighborhood aired in 1968, it was with Daniel Tiger at Mr. Rogers' side. But, this isn't the Daniel Tiger your kids know and love. According to the PBS website, while Daniel Striped Tiger was the original puppet, the animated Daniel Tiger singing about going potty, trying new foods, and dealing with frustrations, is actually the puppet's 4-year-old son. In fact, all of the children you see on the show, like Prince Wednesday and Katerina Kittycat, are children of the original puppets Mr. Rogers used on his show. Guys, how sweet is that?

Not to mention that little Daniel Tiger on the show is a direct representation of Mr. Rogers himself. "Like Fred, Daniel wears a red sweater and sneakers and speaks directly to preschoolers to include them in his day," the PBS website noted. Which is just one reason why the show gives us all the feels.

With more than 870 episodes, Mister Rogers’ Neighborhood is one of the longest-running programs in television history, according to PBS.org. Fun fact? That’s almost five times as many episodes as Friends. In 2012, PBS’ Daniel Tiger’s Neighborhood hit the airwaves — just in time for a new generation of kiddos to fall in love with the show's core themes.

Other fun facts from this Pittsburgh gal? I'm pretty dang proud to know that the city I was born and raised in was home to a stellar individual like Fred Rogers. Every time they pan to the human neighbors in a Daniel Tiger episode and I see our city backdrop — yes, they film those in Pittsburgh and, yes, you better believe I will wiggle my way on to a set one of these days — I smile knowing that the Fred Rogers' legacy lives on in a GRR-rific tiger named Daniel.

Last fun fact on my end: Rogers was the officiant for a family friend's wedding. (Which means we are basically related, right?) Apparently, in the midst of a lifetime of amazingness, Rogers also had time to become an ordained Presbyterian minister. Um, yeah, so he was as awesome as you already thought.

This past February, Mister Rogers’ Neighborhood celebrated its 50th anniversary. In a celebratory piece for the Pittsburgh Post-Gazette, Kevin Conrad — a WQED employee who worked on the show with Rogers — told writer Maria Sciullo about Rogers: “He had that amazing way of making you feel like the most important person in the room. Even if you were in the middle of a studio day and there were a million things going on, he’d take the time to talk to you and ask about your kids.”

Which is exactly what kids and big kids alike see in lovable Daniel Tiger. There's that Fred Rogers' magic paired with new, fun songs for little viewers that make them feel like there really is someone — a neighbor even — who just gets them.