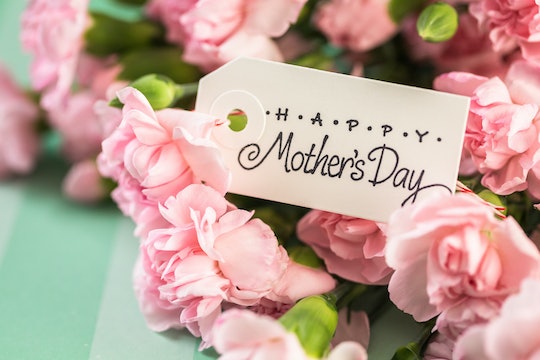 The Origins Of Mother's Day Aren't As Happy As You'd Think

In the U.S., Mother's Day is celebrated every year on the second Sunday in May. Families commemorate the day in a variety of ways: picnics and cookouts, family outings, cemetery visits, gifts and cards, the list goes on and on. But how did this day come about? And why is it celebrated in May? The origins of Mother's Day, while a bit more complicated than you might think, are actually pretty interesting.

To start, American Mother's Day was first celebrated in 1908, according to the website for The History Channel. Although American Mother's Day is very commercialized, with children, partners, and other family members often giving gifts and cards to the mother figures in their lives, it didn't always start out that way. Anna Jarvis, the woman who created the day, didn't intend for it to be this way. According to National Geographic, Mother's Day was supposed to be a day for women in mourning to remember soldiers who had died and fight for peace.

The idea of Mother's Day, however, actually began much earlier than that. According to the website for the Legacy Project, the day can be tied to springtime celebrations in Ancient Greece and Rome. Both civilizations had celebrations for their "Mother of the Gods," which included offerings like cakes and flowers. Additionally, as mentioned in the post on the Legacy Project website, in the U.K., Mothering Sunday is celebrated on the fourth Sunday in Lent, before Easter. Originally, people who worked as servants in households far from home were given the day off to travel home and spend the day with their mothers.

In the aforementioned National Geographic article, historian Katharine Antolini said that, Mother's Day unofficially originated in the U.S. in the 1850s. As she explained, Ann Reeves Jarvis (Anna's mother) would gather "Mothers' Day Work Clubs" of women in West Virginia to fight for improved milk for infants and more sanitary conditions for all. After the Civil War, Reeves Jarvis expanded the groups' efforts to include "Mothers' Friendship Day," which brought together mothers and both Union and Confederate soldiers to promote peace, according to the previously-mentioned article on The History Channel's website. The goal was to get the two sides to reconcile, with moms acting as the ultimate mediators.

When Reeves Jarvis died in 1905, Anna Jarvis was inspired to create a day that celebrates mothers and all they do in an effort to honor her own mother, according to the National Geographic article. The article goes on to note that the first Mother's Day was held on May 10 of 1908, in Jarvis's Grafton, West Virginia hometown, Philadelphia, and a few other cities around the country. Jarvis held Mother's Day annually, expanding her reach to include more cities each year, according to The Huffington Post. After a few years and a successful letter writing campaign, Woodrow Wilson made the second Sunday of May the official Mother's Day holiday in 1914, according to The History Channel.

The site also noted that Jarvis thought the day should be spent celebrating your individual mother or attending a church service. As the day grew increasingly commercialized as years passed, Jarvis fought to counteract all of that, campaigning against any company or industry who profited from the day. Before her death in 1948, Jarvis had even gone so far as to try to get the holiday removed from the calendar.

Also important to the origins of Mother's Day is a short-lived holiday celebrating mothers and peace that was created in 1872, after the conclusion to the Franco-Prussian War. Julia Ward Howe penned her "Mothers' Day Proclamation" in 1870 and created the day a couple of years after that, according to the website for the National Women's History Project. This day was celebrated annually at first, but lost popularity before Wilson signed the congressional resolution that officially created Mother's Day as Americans know it now.

Although Americans will still commemorate the day in the commercialized way that Jarvis despised, at the end of the day, the second Sunday in May is about spending time with the maternal figures in your life and showing how much you appreciate them.