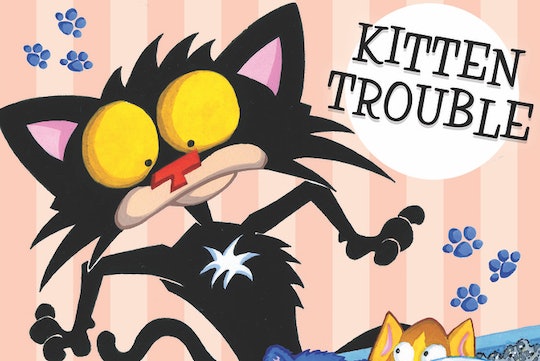 The Ornery Cat Standing Up To Anti-Immigrant Policies

My mother has a story she likes to tell. There’s no predicting when she’ll tell it. We could be talking about dogs or cats or the weather and she will suddenly tell this story as if for the first time, because this story is always present with her like a nagging mosquito inside her subconsciousness. The last time she told me this story, we were sitting at a diner together talking about what to order.

“Do you know what happened to me as a child?” she asked.

“No,” I responded, knowing for certain what would come next. “Tell me.”

When my mother was a child growing up in war-ravaged Shanghai, she would sometimes be sent out on her own carrying a silk dress or perhaps some jewelry hidden in her pockets to trade for food, because even in a war zone a 6-year-old was less likely to be robbed or accosted or assaulted. But not always.

One time, while walking alone outside on a mission, she was spotted by a young Japanese soldier who had just rounded the corner. Without saying a word, the soldier ran to her and grabbed her by the arm. My mother was too small, too weak, and too slow to resist him as he scooped her up and threw her violently into a trash can. He then flipped the canister over, trapping her inside, covered in garbage. My mother was horrified, but knew better than to protest or cry out, which was for the best because moments later an entire squadron of Japanese soldiers marched down that same street. She could hear the screams and gunfire that followed them.

This act of cruelty, my mother would recognize in hindsight, was also the greatest act of kindness anyone had ever shown her. This Japanese soldier took action to save her life in a way that has always stayed with her and always will.

I am not a child of immigrants. I am a child of refugees. My parents didn’t come to America; they ran for their lives to get here.

My father had a similar story. When he was 7, his mother decided to take him and his sister out of Philadelphia and move back to Antwerp, Belgium, to be closer to family. My aunt, being much older than my father, worked during the day, leaving my father alone to his own devices. It was a lonely existence for my father who had difficulty acclimating himself to his school and never really managed to master any of the litany of languages Belgium had to offer. By age 9, my father often found himself spending time in the public library, poring over the American newspapers he sometimes found there.

When some of the old men in the library learned that my father was American, they spoke frankly to him about the horrors that were about to befall them all. There was a nightmare coming, they would say, but at least he could escape back to America. Their words terrified him and, as my father would tell it, he would run home every day screaming and crying and begging my grandmother to take them back to the States. Remarkably, my grandmother relented and they would soon return to America, resettling in New York, where my parents would meet a quarter century later. Less than a month after my father’s return with his family, Hitler’s army would invade Belgium, murdering 88,000 people in the process.

It wasn’t until recently that I realized that I am not a child of immigrants. I am a child of refugees. My parents didn’t come to America; they ran for their lives to get here.

This realization came to me shortly after Donald Trump assumed the presidency and announced that his administration would limit the number of refugees admitted to 45,000. While the number still seemed large, a little research revealed that the overall number of asylum seekers in 2017 alone was 331,800, according to the UN. To make things worse, my media feed became inundated with punditry claiming that this decision was necessary for the safety and security of our nation, that somehow these refugees were a danger to society. They might even be “terrorists.”

This didn’t make sense to me. Certainly my mother and my father, children running from countries either ravaged by war or about to be, weren’t security threats to America then. What about now? Again, a small amount of research revealed that more than half of all refugees are under the age of 18. In 2016, an estimated 28 million children were refugees worldwide, and that number has since grown. Roughly 1 in 200 children in the world is a refugee. The numbers were and are staggering. I tried desperately to think of something I could do, however small.

The answer came to me as I was driving to pick up my daughter from school. My local radio station WNYC had a brief but uplifting report about a man named Luke Miller of Real New York Tours who was similarly distressed by this overwhelming refugee crisis and asked himself the simplest of questions: “What can I do to help?” His answer was obvious. He owned a tourism agency! He could give free tours of the city to newly arrived refugees, giving them the kind of welcome a new family in unfamiliar surroundings could use. And that’s precisely what he did.

The challenge, of course, was to cover a very serious topic while keeping the book fun and silly in a way that Bad Kitty fans expected it to be. Just as challenging was to avoid any compulsion to slip into a didactic wormhole in which I put my message in front of my story. Children are tougher than they might seem and can take on difficult topics in their reading material. But if the message is wrapped in a dull story, then they will not hesitate to close the book and toss it across the room.

In the time it took me to write and illustrate Bad Kitty: Kitten Trouble, the environment for refugees in this country grew even worse.

Bad Kitty: Kitten Trouble tells the story of how Kitty’s owner becomes inspired to bring three kittens into their home who have been displaced by the conflict in a nearby neighborhood. Kitty, being a cat and none too keen on sharing her food and toys, predictably hates this idea and does whatever she can to sabotage the plan. Her behavior becomes so awful that her owner has no choice but to bring in Uncle Murray, who so often acts as the moral center in these books. His reaction, however, to seeing three more cats in the neighborhood is surprisingly negative.

In the time it took me to write and illustrate Bad Kitty: Kitten Trouble, the environment for refugees in this country grew even worse. The Trump Administration further limited the number of refugees allowed into my country to 30,000, a moot number considering that only 21,000 settled here the previous year. Meanwhile, the Justice Department initiated a policy that forcibly separated families seeking asylum as they crossed the border. The policy has since been rescinded, but as I write this, hundreds of children have yet to be reunited with their parents and may face a grim future without them.

It came out on December 31, 2018. It is a simple, heavily illustrated chapter book about an ornery pussycat. But I do hope that my readers will be able to see through the feline zaniness to embrace the themes of compassion and conflict resolution that I think are at the heart of this book. I further hope this book can initiate discussions at home and in the classroom.

And maybe, just maybe, I’ll be able to honor the struggle of those two children who eventually became my parents.

Twenty percent of proceeds from Bad Kitty: Kitten Trouble will be donated equally to UNICEF, The International Rescue Committee, and Doctors Without Borders.