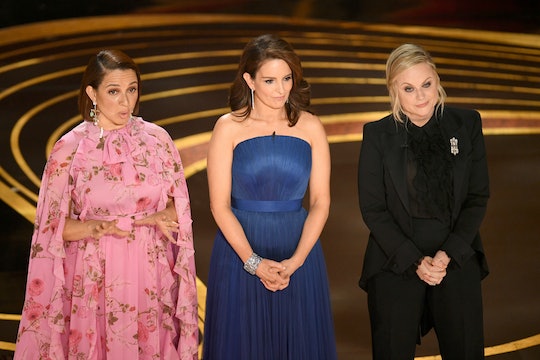 When Kevin Hart opted not to host the Oscars as originally intended, some fans were worried about how the ceremony would proceed without an official MC. It turns out these concerns were unfounded because Amy Poehler, Tina Fey, and Maya Rudolph nailed the Oscars opening monologue. The ladies did so well, in fact, that some fans want them to host the ceremony going forward.

I know this isn't a hot take or anything, but I can't get enough of Amy Poehler, Tina Fey, and Maya Rudolph. Whether all three of them appear together or switch things up as a duo (remember when Poehler and Rudolph's skit at the 2019 Golden Globes stole the show?) these ladies are perpetually on fire. From their wit to their overall likability, it's difficult to find fault with anything they do.

So, when the group showed up to deliver the opening monologue, I had a good feeling it would be a hit. For starters, the trio didn't skirt around the awkward hosting controversy that preceded the show.

"We are not your hosts, but we’re going to stand here a little long so that the people who get USA Today tomorrow will think that we hosted,” Fey joked, according to Hollywood Life.

Rudolph went on to add: “Just a quick update. There will be no host tonight, there won’t be a Popular Movie category, and Mexico still won’t pay for the wall.”

Poehler then addressed another controversy surrounding the Oscars —the Academy's nixed decision to hand four awards during the commercial breaks.

"But we will be presenting commercials during the awards," Poehler quipped about the unpopular choice, according to The Hollywood Reporter. "So if all the winners could please say, 'Hellman's Mayonnaise, we're on the side of food' instead of your speeches, that would be great."

The comedians also poked fun at the year's nominated films, as is customary.

"Roma's on Netflix," Fey said, according to Vanity Fair. "What's next, my microwave makes a movie?"

The 30 Rock alum also made a reference to the disastrous Fyre Festival, saying, “Look under your seats. You’re getting one of those cheese sandwiches from the Fyre Festival!"

As for fan reactions to the opening monologue? It's safe to say people are rooting for the group to host the 92nd ceremony in 2020.

Someone tweeted: "Petition to start every award show with Tina Fey, Amy Poehler and Maya Rudolph."

"Amy, Tina, Maya. The hosts that we didn’t deserve and therefore didn’t get," one person joked.

"I mean, OR they could have just gone ahead and paid Maya, Tina, and Amy a sh—tload of money to host, but NO ONE ASKED ME," one person rightfully commented.

Perhaps I'm biased, but I think the ladies would be great hosts for the 2020 show. Not only are they beloved by fans, but they can carry a major awards show. It just works, right?

So, here's to hoping the Academy takes tonight's feedback to heart and enlists Rudolph, Fey, and Poehler to host next year. Fingers crossed.