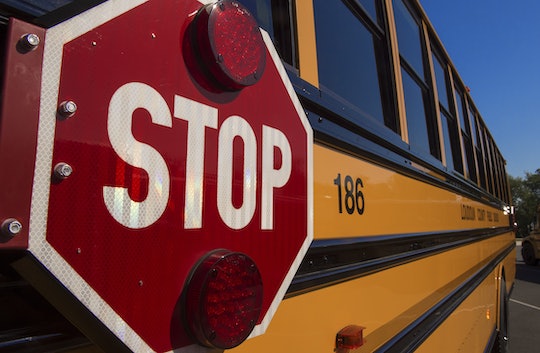 The Other Reason Why The L.A. School Terror Threat Is Stressing Parents Out

On Tuesday, inhabitants of Los Angeles heard the words that any parent would dread: A terror threat has closed all schools in L.A. According to authorities in the school district, the "credible terror threat" was made against "many schools," despite reports that a single school board member had received a bomb threat. And though little else is known about the nature of what was threatened, officials have said that it involved something "electronic." The circumstances surrounding the threat are frightening enough for anyone in the area, but, for parents, there is a long list of fears following the school closures. Will their children be safe? (The Los Angeles Police Department is trying to ensure so.) How long will schools be closed? (Until Wednesday, authorities say.) And how can L.A. parents arrange last-minute childcare following the threat? Well, that's a question that's a little more difficult to answer.

Because, following the threat Tuesday, parents are scrambling, attempting to fully understand the threat that faces their children while trying to care for their children in the present. It's a struggle that authorities already, thankfully, recognize — according to Daily Beast reporter Katie Zavadski, school officials have asked that companies take into consideration staff members who are "primarily mothers and and fathers today."

But not all employers are as accommodating. And the sad statistics about parental stress reflect that — the Bright Horizons Modern Family Index reported in 2014 that a whopping 48 percent of working parents "fear their family obligations could get them fired." And whether an unexpected snow day or an entirely unexpected terror threat (ugh, the fact that that's even a thing, you know?), a last-minute school cancellation makes family obligation more important than ever. And, often times, that means a parent must work from home, sometimes less efficiently, in order to care for their child.

And, of course, childcare is just the first stress when it comes to parents facing the terror threat, which comes just weeks after a married couple who pledged allegiance to ISIS killed 14 people in San Bernardino, California. Even though schools will reportedly reopen on Wednesday, school violence is hardly a rarity these days — according to Everytown For Gun Safety and Moms Demand Action for Gun Sense in America, as of October, there had been 142 school shootings since 26 people were killed in the Sandy Hook massacre in Newtown, Connecticut in 2012. And, considering the L.A. school cancellations come just one day after Sandy Hook's third anniversary, that's a fact that's likely weighing heavily on the minds of all parents — whether on the West Coast or not.