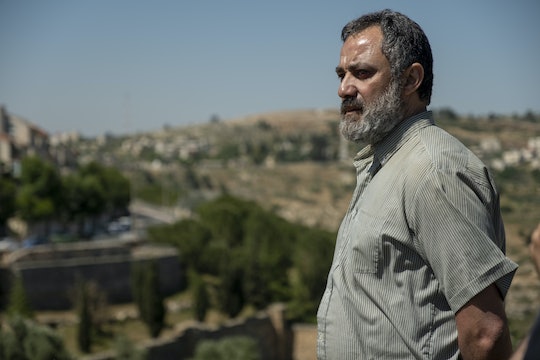 The True Story Behind HBO's 'Our Boys' Is Terrifyingly Resonant

HBO's gripping American-Israeli production, Our Boys, might easily be compared to Chernobyl for its hyper-specific attention to detail and the momentous historical events depicted. But unlike Chernobyl, Our Boys is set in the very recent past. So for viewers unfamiliar with the violent chain of events that sparked the 50-day Gaza War depicted in this dramatization, here's a quick primer on the Our Boys true story.

The series opens up just after the events of Jun. 12, 2014, when three Jewish teenage boys — Naftali Fraenkel, Gilad Shaer, and Eyal Yifrach – were kidnapped from an Israeli settlement on the the West Bank, sparking a wide-ranging manhunt led by the Israel Defense Forces. The trailer shows snippets of an emergency call placed by Shaer, in which gunfire and shouting can be heard in the background. Israeli Prime Minister Benjamin Netanyahu declared that the Palestinian militant group Hamas organized the kidnapping, which the group denied, but the Israel Defense Forces commenced with arresting around 400 Palestinians anyway, according to Time. The boys were later found dead.

Marwan Qawasmeh and Amer Abu Aisha were considered prime suspects in the kidnapping, so the Israeli government signed off on 34 air strikes targeting the Gaza Strip, as well as the deployment of explosives to destroy Qawasmeh and Abu Aisha's homes, according to the New York Times. But the brute force with which Israeli forces responded to the kidnappings only caused more strife.

On Jul 2., after the airstrikes, 16-year-old Mohamed Abu Khdeir was kidnapped by Israeli Jews outside a mosque near his home in East Jerusalem, according to the New Yorker. He was eventually found strangled, beaten, and burned alive. Two Israeli minors and 31-year-old Yosef Haim Ben David confessed to the crimes, confirming that it was a revenge killing for the kidnap and murder of the three Jewish boys, according to CBS News. Violent protests subsequently broke out, sparking what is now known as the 50-day Gaza War.

During the conflict, Hamas launched rocket fire into Israel while Israeli forces continued to launch airstrikes and ground bombardments. In the end, more than 2100 Palestinians and 72 Israelis died, according to The Guardian. Qawasmeh and Abu Aisha were ultimately killed in a police shootout in September 2014, while a third Hamas member named Hussam Qawasmeh was sentenced to three life terms in prison. One of the two minors involved in Abu Khdier's death received 21 years in prison while the other received a life sentence. Ben David also received a life sentence in addition to 20 years for other crimes committed.

Our Boys tightly focuses on the events directly after the first kidnapping, leading up to the war. Hagai Levi, one of the series' three co-creators alongside Tawfik Abu-Wael and Joseph Cedar, told Vulture:

The election of Trump was a crucial point in the development of the series. Until that moment, we kind of talked about religious people who are extremists or ideological, but when Trump was elected, it was clear to us that we were going to make a show about hate crime.

It may be a close retelling of a true story, but Our Boys is sure to resonate across universally troubling nationalist themes.