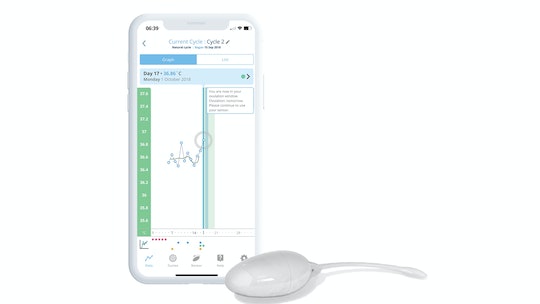 This Wearable Fertility Monitor Means No More Guessing When You're Ovulating

Trying to get pregnant can be so stressful, and it can become even more frustrating if you're having trouble tracking your cycle. A new fertility monitor called OvuSense is aiming to take the guesswork out of ovulation, and make it faster and easier to get a bun in your oven.

There are two components to OvuSense (which costs $129 for a starter pack with a two month subscription, or $299 if you want the device plus a yearlong subscription). First, there's a wearable monitor that you insert like a tampon and keep in overnight. It takes your core temperature every five minutes as you sleep. When you wake up, you simply take it out, wash it, and upload your data to an app, where it's stored in a secure cloud database. All that information lets OvuSense predict when you're going to ovulate, and the company says the device is 99% accurate.

Tracking your temperature is a common method for figuring out ovulation, according to Parents. But speaking from personal experience, it can be a pain to do it on your own. If you've ever tried to track your temperature with a basal thermometer, you'll know it's just super easy to forget. You're supposed to do it first thing in the morning, before you've even moved much, according to the Mayo Clinic. I briefly attempted it when I was trying to conceive my daughter, but quickly gave it up because I could never manage to remember to do it before I jumped out of bed and headed to the bathroom. Using OvuSense would certainly eliminate that problem.

The tracker is especially good for anyone whose cycles aren't regular. Those who have conditions like polycystic ovary syndrome, endometriosis, or even those are simply dealing with an overload of stress might struggle to time their cycles, according to the Cleveland Clinic. It's hard to know when you should start having sex if you never know when to expect ovulation, but OvuSense can help you plan when to hit the sheets to maximize your chances of sperm meeting egg. The device can actually outline an eight day window when you're at peak fertility, so you can get a few romps in. OvuSense can also be really helpful when used in conjunction with fertility treatments, since you'll be able to see how any medications or supplements you're taking affect your cycle.

There are lots of gadgets on the market these days that claim they can help you get pregnant, but OvuSense has one big thing going for it that some other products don't. It's approved and fully regulated by the FDA here in the U.S., after going through two clinical trials and intensive testing. It's also approved by regulatory bodies in Europe, Canada, and Australia — so you can feel more confident that you're getting a product that's worth the investment.

If you're on the fence about whether you want to fork over the money for OvuSense, there's one more important thing to know. It comes with a 100% money back guarantee, so if you use it for six months without detecting ovulation, you'll get a full refund.