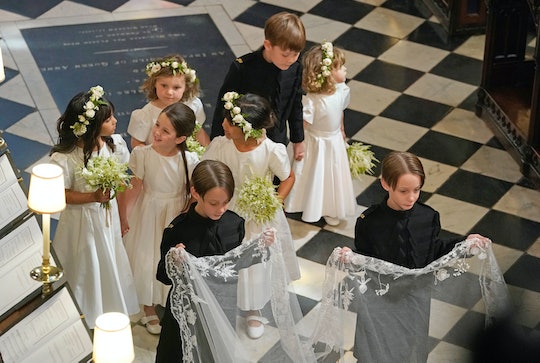 The Page Boys & Bridesmaids Apparently Had A Blast At The Royal Wedding, & How Could They Not?

It is hard to determine a clear "winner" of Prince Harry and Meghan Markle's royal wedding, which took place last Saturday. Some people would argue that it was the stunning couple, or the guests that had the privilege of scoring a ticket to the nuptials. But you can't argue with the fact that smallest guests in attendance — Prince Harry and Markle's page boys and bridesmaids — stole the show in their super adorable outfits when they showed up to the wedding. As it turns out, as Us Weekly reported, the page boys and bridesmaids at the royal wedding had "so much fun with it," according to Ben Mulroney, whose children were in the wedding party — proving that the wedding was as much fun as the kids were making it out to be.

The whole bridal party, comprising of 10 lucky kids all under the age of 7 years old, according to CNN, truly made the wedding — from their adorable reactions, to the fact that the page boys were dressed identically to Prince Harry at the wedding, and to Princess Charlotte's adorable wave at the end of the ceremony. Although there were a lot of people watching the kids, they remained composed under pressure — including twins Brian and John Mulroney, who carried Markle's train down the aisle and their sister, Ivy Mulroney, who served as a bridesmaid.

The Mulroney children's father and husband to Markle's best friend, Jessica Mulroney, (who also happens to be the co-host of Canadian talk show, Your Morning, according to Us Weekly), he revealed during an episode of Your Morning on Tuesday that in spite of all eyes being on his kids (and the other members of the bridal party) the children were able to have fun with their very important roles. "There had been so much talk for them to get it right with the rehearsals, and these kids are so young," Mulroney revealed, according to Us Weekly.

While there was just a bit of expectation for Mulroney's kids to perform, once they were at the royal wedding, all of that expectation went away. Mulroney continued, saying, according to Us Weekly:

There was a lot of worry that it wouldn't get done right, but they're having so much fun with it. And that, to me, was the thing that gave me the most pride. We didn't put so much pressure on them that this wasn't joyful for them. And it was pretty darn joyful.

By revealing this very helpful information, royal watchers are finally getting some insight into the thoughts that were running through the kids' heads at the time of the royal wedding. Rest assured, the kids were having just as much fun as the millions of people who watched the event at home, according to CNN.

You could especially tell that the page boys were having fun when one of the Mulroney twins, Brian, went viral on Twitter for his reaction when he walked into the chapel with Markle, according to E! News. And on Tuesday, Mulroney also explained why Brian was so happy, according to Us Weekly. Mulroney said:

I asked him [about that] and he said he'd never heard a trumpet before. When he walked in, I think he saw all the people there and the flowers. None of that was there during rehearsal.

You would be excited if you were a part of the royal wedding and got to witness all of that beauty in person, too. Although so much was going on throughout the wedding, the children in the wedding party served as a helpful reminder for the guests and people watching at home to just enjoy the moment. Based on Mulroney's words about the wedding, it was clear that the kids at the royal wedding were doing just that.